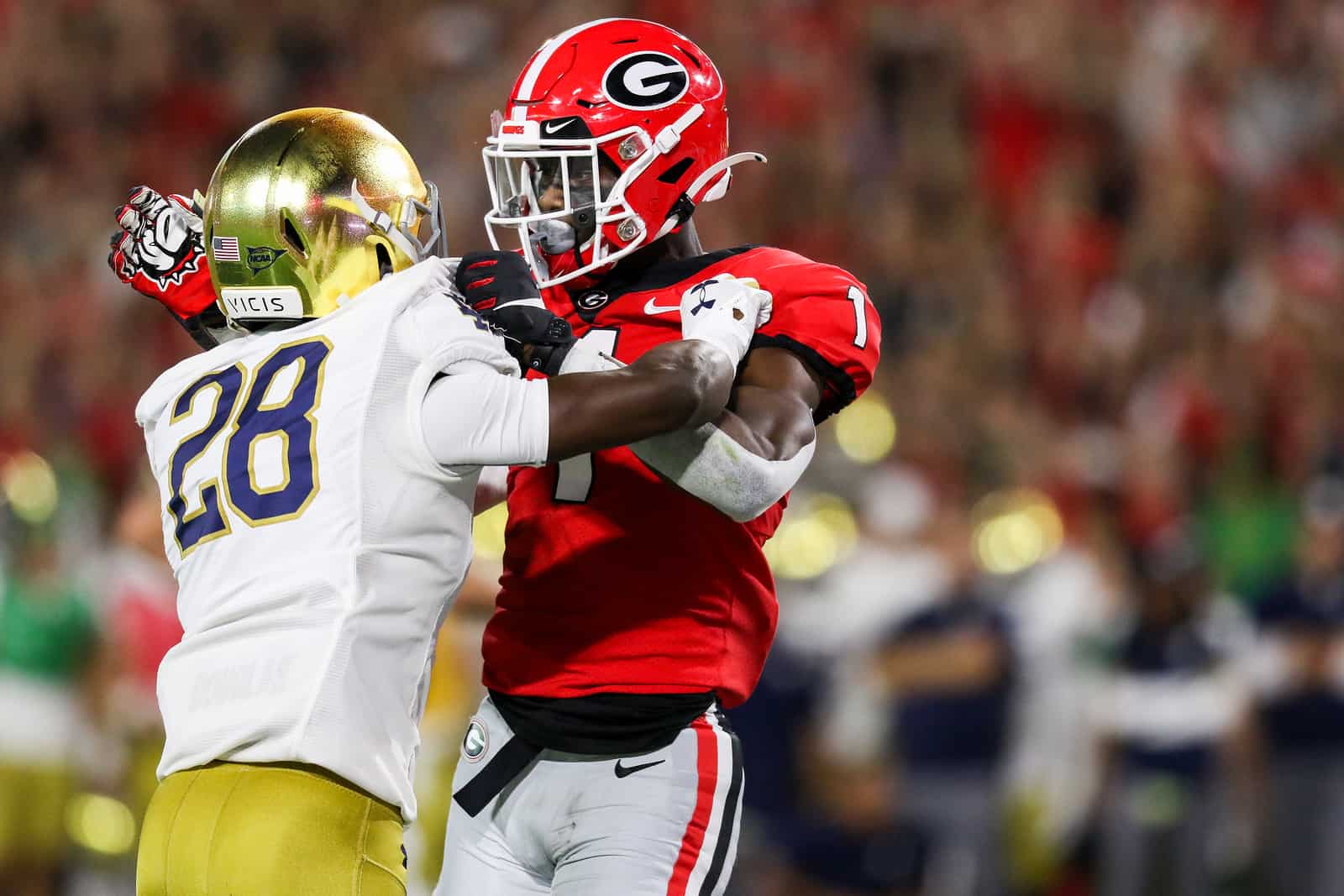 ATHENS, Ga. – The No. 3-ranked Georgia Bulldogs scored 16 unanswered points to start the second half and held off a late push from seventh-ranked Notre Dame in a 23-17 victory on Dooley Field at Sanford Stadium Saturday night.

A record crowd of 93,246 and a national television audience on CBS watched as the Bulldogs fell behind 10-7 at the half. Georgia (4-0, 1-0 SEC) then stormed out in the final 30 minutes to preserve the win late in the game.

Junior tailback D’Andre Swift led all rushers with 98 total yards on the ground, including a 3-yard touchdown run in the second quarter. Junior quarterback Jake Fromm completed 20-of-26 passes for 187 total yards and one score.

“That was a hard-fought game,” Georgia head coach Kirby Smart said. “I have a lot of respect for Notre Dame and their program and how they battled. But man, our kids played hard. … That was a huge win for them. They play so hard and work so hard and play with toughness. I was happy to see them pull that out.”

Neither team could get much going in the first quarter as the game stayed scoreless through the first 15 minutes. Notre Dame was able to move the ball into Georgia territory, but a fumbled snap by quarterback Ian Book on 4th-and-2 stalled the Irish drive.

A muffed punt by Tyler Simmons set Notre Dame up at the Georgia 8-yard line, eventually leading to a 4th-and-goal at the one. The Bulldogs were able to press Book out of the pocket, but he found tight end Cole Kmet in the end zone for the first score of the night, giving the Irish a 7-0 lead at the 10:39 mark of the second quarter.

The Bulldogs countered with an 8-play, 75-yard drive capped off by a 3-yard touchdown plunge by Swift.

Notre Dame kicker Jonathan Doerer ended the half with a 27-yard field goal to put the halftime score at 10-7.

On the Irish’s first offensive possession of the second half, Wilson intercepted a Book pass and set the Bulldogs up at the Notre Dame 22-yard line. Georgia’s drive came to a halt and Rodgrigo Blankenship knotted the score at 10-10 with a 40-yard field goal.

Blankenship added another — this time from 31 yards out — to give Georgia its first lead at 13-10.

Georgia’s onslaught continued into the fourth quarter. Senior wide receiver Lawrence Cager capped off an 8-play, 82 yard drive with a 15-yard touchdown reception in the corner of the end zone.

Following another Blankenship field goal, Book marched the fighting Irish down the field on a 10-play, 75-yard drive, which ended with Chase Claypool’s 4-yard TD reception.

Notre Dame forced a 3-and-out and the Fighting Irish got the ball back with two minutes on the clock. On a 4th-and-8 play, Book’s heave fell just short and the Bulldogs held on for the 23-17 win.

Georgia now has a week off before traveling to Tennessee on Oct. 5.

*Georgia Wins Defensive Battle 23-17: The Bulldog defense, which leads the SEC and ranks third nationally in scoring defense (7.7 ppg) held Notre Dame scoreless in the third quarter and to just seven points in the second half after the Fighting Irish came in averaging 50.5 points a game. Georgia was trailing the Irish 10-7 at the half. Georgia forced the Irish to punt on their first three possessions before Notre Dame scored on an 8-yard drive following a turnover with 10:39 left in the second period.  This was the first time the Bulldogs had trailed this year. Notre Dame won the coin toss and chose to take the ball.  The first drive saw the Irish go 40 yards on seven plays before having to punt.  On Notre Dame’s second possession, the Irish got the ball at the UGA 40 yard line and forced a 4th-and-2 situation.  The ball got away from QB Ian Book and the Bulldogs forced an incompletion to get the ball back. Notre Dame punted at the end of its third possession. However, senior Tyler Simmons fumbled the return and the Irish got the ball at the UGA 8 yard line.  Notre Dame went 8 yards in five plays, including its scoring play on a 4th-and-1 situation to make the score 7-0. On the year, opponents are now 2-for-7 on fourth downs against Georgia while Notre Dame is 6-for-9 in 2019.

*Top 10 Showdown: Third-ranked Georgia improved to 4-0 with a 23-17 win over seventh-ranked Notre Dame (2-1). The Bulldogs are now 7-4 all time in top-10 matchups here, and this was the first involving a non-conference team since 1966 (No. 7 Georgia beat No. 5 Ga. Tech 23-14). Georgia is 6-3 against top 10 teams in the Kirby Smart era and 2-0 in Athens. Also, tonight marked Georgia’s 16th straight win at home dating back to 2017 which ranks third in school history. The Bulldogs are now 3-0 against Notre Dame. ESPN GameDay was in town, and Georgia is 7-14 when they visit the Classic City.

*Offense Comes Alive In the 2nd Half: The Bulldogs scored their first touchdown of the game on a 3-yard rush from junior TB D’Andre Swift at the 2:27 mark in the second quarter to tie the game at 7-all.  UGA scored on a 13-play, 8:12 drive (both season longs) as Swift scored his third rushing touchdown this year and 16th in his career. The TD-drive of 8:12 was the third longest by time in school history and longest since a record 8:45 TD-drive against Tennessee in 1998 (19-plays, 87 yards). The Bulldogs came into the game averaging 49.7 points/game.  Following a pair of field goals, junior QB Jake Fromm connected with graduate WR Lawrence Cager for a 15-yard touchdown to give the Bulldogs a 20-10 edge.  This was Cager’s first career touchdown as a Bulldog (he had 10 scores at Miami from 2016-18). This broke a streak of three straight games that the Bulldogs had scored a touchdown on their first possession.  In fact, the game was scoreless in the opening period, which is the first time UGA and its opponent did not score in the first quarter since the 2018 National Championship Game versus Alabama. Tonight was the first time Georgia won a game after trailing at halftime since the 2018 Rose Bowl Game victory over Oklahoma 54-48 in overtime.

The Bulldogs took their first lead at the 4:21 mark in the third quarter.  Georgia drove 53 yards on seven plays in 2:36 before graduate PK Rodrigo Blankenship drilled a 31-yard field goal. Junior QB Jake Fromm was 20-for-26 with 187 yards and 1 TD.  Swift had a career high 18 carries for 98 yards and a score. Junior WR Demetris Robertson had UGA career highs with four catches for 48 yards.

*The Kicking Game: Rodrigo Blankenship connected on two PATs and hit a 40-yard, a 31-yard and a 43-yard field goal for 11 points.  Blankenship moved past Kevin Butler to fourth on the career scoring list with 358 points.  He has connected on a school record 175 consecutive PATs.  Blankenship is now 61-for-72 in field goals, including 22-for-30 from 40 or longer in his career and 8-for-8 overall this season.

*Points Off Turnovers: The Bulldogs are +2 in turnover margin after giving up a fumble in the first quarter and notching an interception in the third and fourth quarters.  After Tyler Simmons fumbled a punt deep in Bulldog territory, the Irish scored the game’s first touchdown on 4th-and-1 on the next possession.  Redshirt freshman DB Divaad Wilson collected his first career pick.  Senior PK Rodrigo Blankenship then drilled a 40-yard field goal.  J.R. Reed had a sliding interception (first this year, fifth as a Bulldog) at the 11:11 mark in the fourth quarter.  Then, Georgia turned it into another field goal, a 43-yarder by Blankenship for a 23-10 lead. Opponents have scored 14 points off four Bulldog miscues while Georgia has tallied 16 points on six turnovers this season.

*For Starters: Junior DJ Daniel (DB) started his first game with sophomore Tyson Campbell on the sideline with a right foot injury from last week’s game.  Junior Demetris Robertson (WR) started his first game in red and black after starting a total of 15 games between the 2016-17 seasons for California before transferring.  Jake Fromm started his 32nd straight to lead the offense while J.R. Reed now leads the defense with 33 in a row.

*Injury Report: Junior LG Solomon Kindley left the game in the second quarter with a left ankle injury.  Tyson Campbell, who had started four games in a row bridging the 2018 season, did not dress out after his game three injury.  Also of note, junior RT Isaiah Wilson returned in the second half after not playing in the first two periods.  Wilson left last week’s game with an ankle injury.

*Record Attendance: The attendance for Saturday’s night top 10 showdown at Dooley Field at Sanford Stadium was a record 93,246 after UGA added 500 additional seats for its showdown with seventh-ranked Notre Dame.=n.

On the win …
“That was a hard-fought game. I have a lot of respect for Notre Dame and their program and how they battled. But man, our kids played hard.… That was a huge win for them. They play so hard and work so hard and play with toughness. I was happy to see them pull that out.”

On the attitude at the half …
“We were confident we could do some things because we were moving the ball. Our defense was playing pretty well and made some stops, so I was pleased with the effort. We made some adjustments and felt like we could come out and score some points.”

On the crowd …
“They impacted those guys. They had 5-6-7 penalties and had to use their timeouts. Our fans caused their quarterback to have some issues. …We need that out of our fans all the time. That is a real homefield advantage. You need that in college football.”

On D’Andre Swift …
“That was the heart of a warrior. He ran so hard and did a great job. He played with passion, energy, and toughness, and he had a good offensive line in front of him.”

On players replacing injured players …
“It’s a tough deal when guys go down and you have to step up at the spur of the moment. We kept battling through. … We’ve got some guys who are out and some who are banged up, so we’ll use the off week to try to get healthy.”

On his first career interception…
“I was a little beat on the route. Number 10 [Chris Finke] is a great receiver for them [Notre Dame]. I mean, I just lucked up, basically, but I had to snatch the ball and just play ball.”

On the defense closing out the win…
“Stepping in with the defense, I mean defense wins games, but I’m not new to big crowds. I’ve been playing in big crowds all my life. It wasn’t really a big difference for me.”

On whether he is happy to survive this game…
“I definitely think that there was a sigh of relief there at the end. I think we’re going to really try and enjoy this moment, enjoy the next 24 hours so that we get to enjoy it. Then, after that we’re just going to see how we can get better as a football team.”

On the fan support and crowd forcing Notre Dame penalties…
“Any time Georgia can show up like that… we’ve got to do that every game. Not just this one, but every time we’ve got a home game, it matters. If it’s at 12 or it’s at 9 in the morning, we need them to show out.”