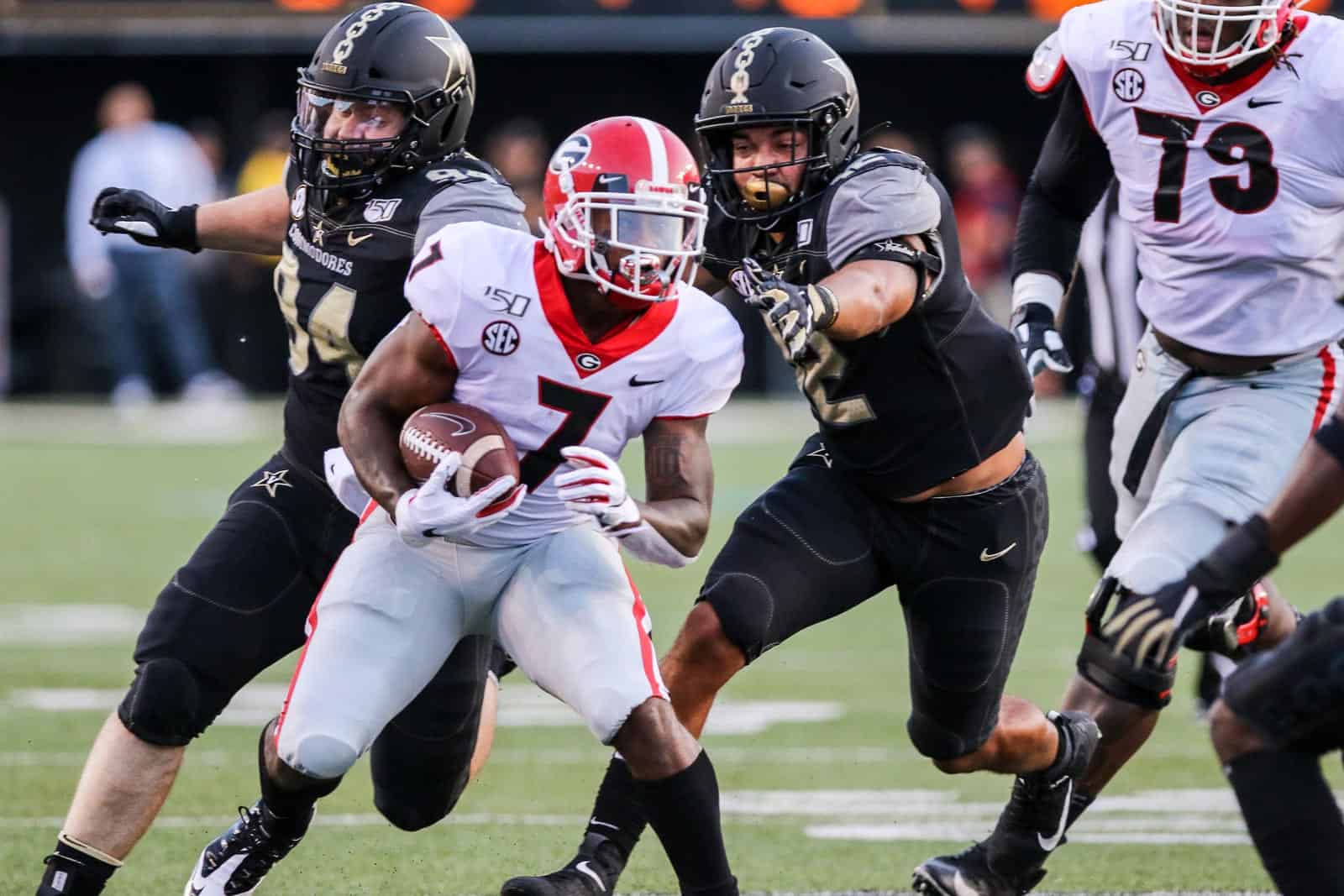 NASHVILLE, Tenn. – The third-ranked Georgia Bulldogs opened their 2019 season with a 30-6 victory over Vanderbilt in front of 40,350 fans at Vanderbilt Stadium and an ESPN nationally televised audience on Saturday evening.

With the victory, Georgia improved to 96-27-3 in season openers and 13-10-1 in openers against SEC opponents. Saturday’s win was the first opening game at an SEC opponent since a 24-21 Bulldog victory at South Carolina in 1994.

Junior quarterback Jake Fromm began his third season under center for the Bulldogs (1-0, 1-0 SEC) with a 15-of-23 passing performance for 156 yards and a touchdown. Along with Fromm’s passing, the Georgia offensive attack was bolstered by a dominant ground game that amassed 325 yards. Junior tailback D’Andre Swift led the Bulldogs with 149 yards rushing, the fifth time he has eclipsed the century mark in his career.

The Georgia defense also turned in a stout effort, allowing 225 total yards of Vanderbilt offense and only five plays of over 10 yards. The Bulldogs were especially impressive on third down, with the Commodores (0-1, 0-1 SEC) only converting on 3-of-14 opportunities. Junior defensive back Mark Webb and junior inside linebacker Monty Rice tied for the team lead with seven tackles, while redshirt freshman outside linebacker Azeez Ojulari followed close behind with six tackles and a half-sack.

“We’ve still got a long way to go,” said Georgia head coach Kirby Smart. “But, I’m proud of our guys. I don’t take it lightly when you go on the road in a SEC opener and you open up with a couple touchdowns. We had a lot of young guys on defense step up and play well…We wanted to come in here and play physical, establish a brand of football that we play. I thought we did that.”

The Bulldogs opened the contest with an impressive 8-play, 75-yard drive, asserting their strength on the offensive line with six rushes for 60 yards before Fromm found junior wide receiver Demetris Robertson in the back of the end zone for a touchdown, the first catch of his Georgia career. After Vanderbilt’s first possession stalled near midfield, Georgia turned toward the air with Fromm connecting again with Robertson on a 17-yard completion and redshirt sophomore receiver Matt Landers for 15, finishing with sophomore running back James Cook scoring on an 18-yard rush to cap off a 10-play, 89-yard drive. On their first two drives, the Georgia offense exhibited remarkable efficiency, tallying 11 first downs with an average pickup of 8.8 yards per play.

Following a tremendous open-field tackle by senior linebacker Tae Crowder on third-and-2, the Commodores retained possession with a successful fake punt, followed by a 23-yard rush from Justice Shelton-Mosley that brought them into Bulldog territory. The momentum proved to be short-lived for Vanderbilt as a pair of penalties forced a third-and-31 that shorted the drive.

Fromm and the offense continued to roll on the ensuing possession, highlighted by a game-high 38-yard strike to graduate receiver Lawrence Cager and a 16-yard run from Swift. After a Commodore pass interference penalty in the end zone, the Bulldogs extended their lead to 21-0 on a 1-yard touchdown run by senior running back Brian Herrien, completing a 7-play, 80-yard drive.

On the following sequence, Vanderbilt finally broke through with its first trip to the Georgia red zone, but the Commodores had to settle for a 26-yard field goal from Ryley Guay that sneaked inside the cross bar despite being deflected at the line by sophomore defensive lineman Jordan Davis. The Commodores tacked on another score with a 46-yard Guay field goal, narrowing Georgia’s 21-6 halftime lead.

After Georgia stopped Vanderbilt on its first drive of the second half, the Bulldogs slowly made their way down the field on an 8-play, 48-yard drive, culminating in senior kicker Rodrigo Blankenship’s first field goal of the season from 50 yards out. During the drive, redshirt freshman running back Zamir White made his on-field debut for Georgia with a 3-yard run, completing his comeback from two ACL injuries.

On their next possession, the Bulldogs opened the drive in Commodore territory following a 27-yard punt return from senior Tyler Simmons, but came away empty when Swift was stopped at the 17-yard line on fourth-and-1. Georgia then pinned Vanderbilt deep in its own territory, leading to a thunderous third down sack of quarterback Riley Neal by Ojulari and sophomore inside linebacker Channing Tindall.

Georgia’s next score of the game came from the foot of Blankenship as he converted a 37-yard field goal. On the following Commodore possession, the Bulldogs defense forced their first turnover of the season when junior defensive lineman Devonte Wyatt recovered a Neal fumble at the Vanderbilt 45-yard line. Later in the fourth quarter, Blankenship finished the evening’s scoring with his third field goal of the evening, hitting from 31 yards away.

“We have a chance to be explosive offensively, and we’re going to try to be aggressive defensively,” said Smart. “We’re going back to work Monday, and go out there and go good-on-good, and put the hammer down and find out who’s going to get better.”

Next, Georgia opens its 2019 home slate against Murray State (1-0) at Sanford Stadium at 4 p.m. on ESPN2. Prior to the game, the playing surface at Sanford Stadium will be dedicated as Dooley Field in honor of legendary head football coach and athletics director Vincent J. Dooley.

*Season Openers and Series History: With tonight’s 30-6 victory, the Bulldogs improve to 96-27-3 in season openers including 4-0 under Kirby Smart. Georgia is now 58-20-2 in the all-time series with Vanderbilt including 27-12-2 in Nashville. Tonight marked Georgia’s first season opener versus an SEC team since 1995 and the first time an SEC season-opener on the road since 1994. Also of note, Georgia has extended its streak to 14 consecutive wins over SEC Eastern Division teams, dating back to the 2016 season. Georgia is now 19-6 in the SEC regular season under Smart and 33-10 overall.

*Swift Rushing Attack: Georgia tallied 146 yards on the ground in the first half and finished the night with 325 yards. Junior D’Andre Swift led the way with 149 yards on 16 carries (9.3 avg.). He had a 36-yard scamper early in the third quarter that pushed him over 100 yards for the night for the fifth time in his career. Sophomore James Cook scampered in from 18 yards for his third career rushing TD to make it 14-0 with 0:56 left in the first quarter. Cook collected the first two catches of his career for 13 yards in the first half.

*Defense: In the first half, Vanderbilt got a couple of field goals and tallied 145 yards on 31 plays. Sophomore Jordan Davis tipped the first field goal but it still went through to make it 21-3. The Commodores were shut out in the second half, Georgia did that last against Auburn last season in a 27-10 win. VU finished with 225 yards on 62 plays. Junior Monty Rice and junior Mark Webb led all tacklers with seven each. Also, junior Devonte Wyatt recovered a fumble in the fourth quarter.

*Blankenship Moves Up: With his three extra points in the first half, graduate Rodrigo Blankenship moved up to third in SEC history for Career Consecutive PATs made with 157, four away from second place. The SEC record is 198 held by Daniel Carlson (Auburn) with 198. Blankenship already owns the Bulldog record. Also, he booted a 50-yard field goal, and he’s 4-for-5 from 50+ in his career. He made a 37-yarder and a 31-yarder in the second half to push the lead out to 30-6. Five of his seven kickoffs were touchbacks.