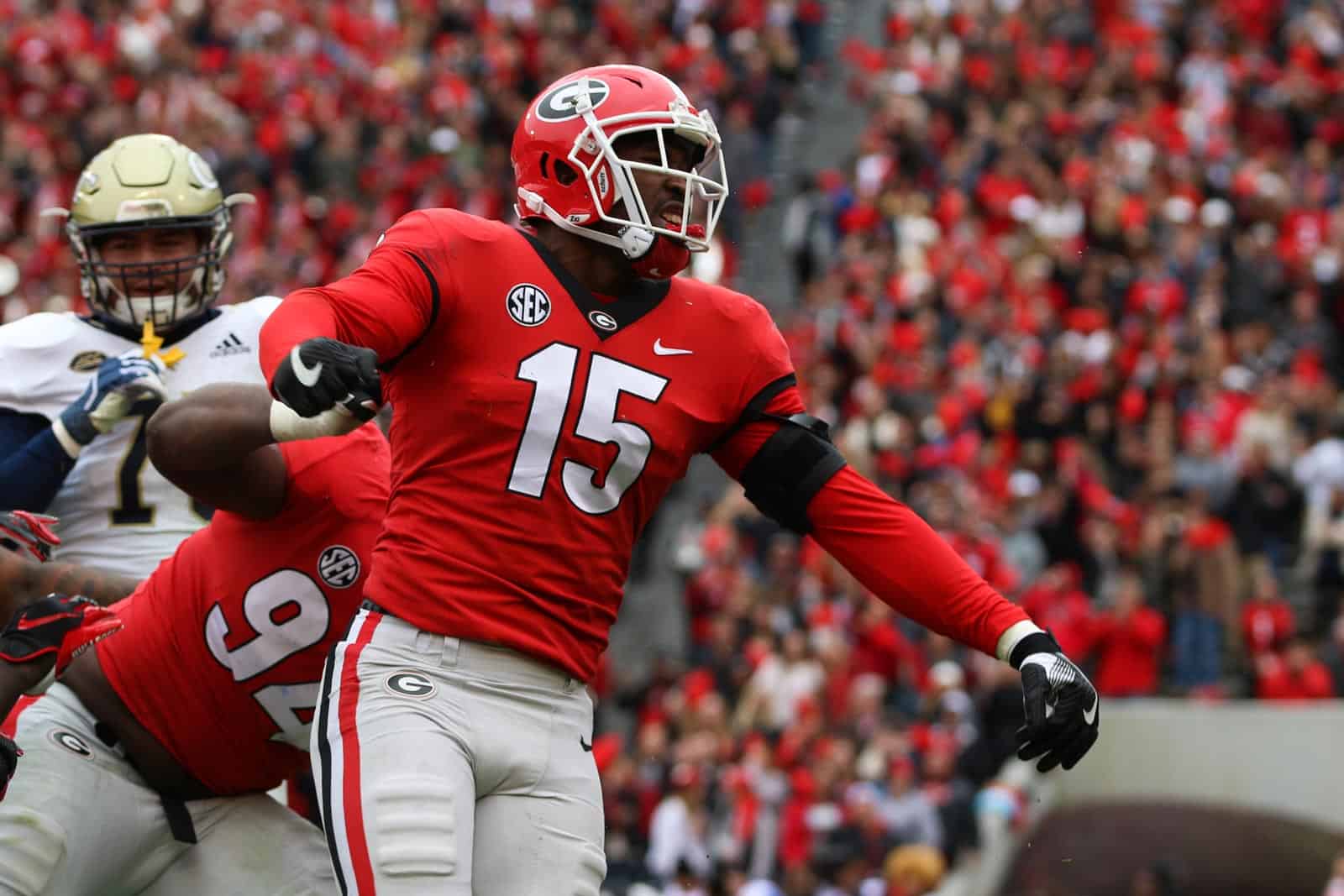 NASHVILLE, Tenn. – Five Georgia Bulldogs were chosen Saturday on the final day of the 2019 NFL Draft, totaling seven selections tied for second in school history and fifth among all schools.

Hardman, Ridley and Godwin also accomplished a significant feat with their selections. Together they are the most Georgia receivers picked in a single draft class in the common draft era.

Ridley was selected by the Chicago Bears with the 126th pick in the fourth round. He emerged in 2017 with seven starts, including six catches for 82 yards in the 2018 National Championship Game. This past season, Ridley led Georgia with 44 catches for 570 yards and nine touchdowns.

The Cocunut Creek, Florida, product is the 21st Bulldog to be drafted by the Bears since 1944. He joins two former teammates in the Windy City: Roquan Smith, who was selected No. 8 overall last year and led the Bears in tackles (122) as a rookie, as well as Javon Wims, who was a seventh-round selection in 2018.

Walker was picked up by the Tennessee Titans in the fifth round (168th overall). His selection was announced by his childhood friend Christion Abercrombie, who had his collegiate career at Tennessee State halted by a severe brain injury. Abercrombie has since made an incredible recovery and made the announcement live in Nashville.

Out of Fairburn, Georgia, Walker combined for 27.5 tackles for loss in his Georgia career, ranking fifth among Bulldogs since 2005 in an elite group consisting of Jarvis Jones, Jordan Jenkins, Justin Houston and Geno Atkins. In his final season, he led Georgia in sacks (7.5), tackles for loss (11) and QB pressures (15).

Gaillard was selected by the Arizona Cardinal in the sixth round (179th overall). He is the 20th Bulldog selected by the Cardinals franchise since 1943, joining the likes of Georgia greats Charley Trippi and Garrison Hearst.

The Fayetteville, North Carolina, product entered the Classic City as a highly-touted defensive lineman signee, but soon transitioned to center due to the departure of David Andrews, now a two-time Super Bowl champion with the New England Patriots. Gaillard started all 42 games for the Bulldogs over three seasons and earned 2018 First Team All-SEC honors.

Two Bulldogs, Nauta and Godwin, were drafted in the final round to conclude the draft. Nauta was selected by the Detroit Lions in the seventh round, joining two former Bulldogs on the roster. Matthew Stafford, the No. 1 overall pick in the 2009 overall draft, has quarterbacked the Lions for 10 seasons with nearly 39,000 career passing yards. John Atkins plays on the Lions’ defensive line as well.

A three-time GHSA state champion at Buford High School, Nauta finished his high school career at IMG Academy before entering at UGA in the fall of 2016. In 27 starts and 42 games played, Nauta combined for 68 catches, 905 yards and eight touchdowns in his career.

The final Georgia selection was Godwin, who marked the third WR drafted for the Bulldogs. He was drafted in the seventh round by the Carolina Panthers. The Panthers have drafted Bulldogs such as 2015 NFL Man of the Year Thomas Davis and Charles Johnson.

The native of Hogansville, Georgia, became a four-year starter and finished No. 11 all-time in receptions (133) at UGA. As a junior, Godwin made 38 catches for 639 yards and six touchdowns to lead the Bulldogs to 13 wins and the 2017 SEC Championship.