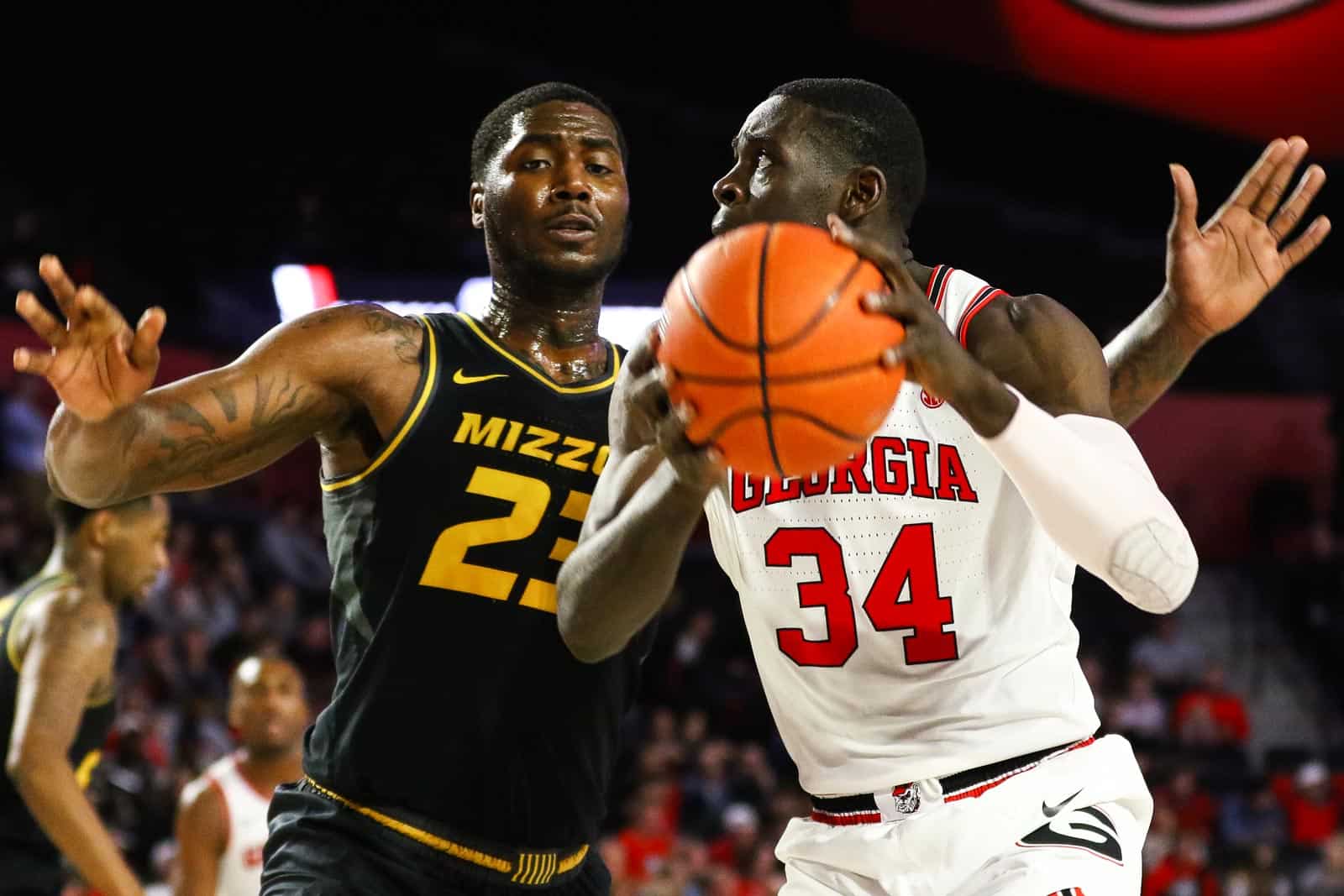 ATHENS, Ga. – The University of Georgia men’s basketball team lost to the Missouri Tigers 64-39 in Stegeman Coliseum on Wednesday night.

Nicolas Claxton led the Bulldogs with nine points and 10 rebounds, his 11th double-digit boards game of the season.

“We have had so much good in the sense of improvement, and we’ve had a bunch of really good practices,” said Georgia head coach Tom Crean. “We have to work at it, and correct it to get ourselves ready for South Carolina and beyond.”

The first half was heavily defensive. Georgia (11-19, 2-15) established the edge in the first two minutes of the game. Missouri (14-15, 5-12) came back to tie then take the advantage 4-3 at the 13:26 mark. The Bulldogs narrowed the gap to one but were unable to catch the Tigers. Both teams maintained pressure resulting in the 25-14 score going into the half.

Coming back to the court, Missouri remained dominant going on a four-point run. The Bulldogs answered with two free throws from Derek Ogbeide bringing the score to 29-16 with 16:29 remaining. The Tigers continued to maintain a steady scoring pace, upping their advantage to 19.

JoJo Toppin nabbed Georgia’s first three of the night followed by a Claxton jumper bringing the score to 41-21. A Tyree Crump jumper ignited a 7-0 run for Georgia with 4:09 remaining.

The Bulldogs will wrap up their regular-season schedule on Saturday Mar. 9, at South Carolina at 1:00 p.m. on the SEC Network.

• Georgia still holds the slight edge in the all-time series against Missouri at 7-6 including a 4-2 mark in Athens. The Bulldogs have won seven of the last 10 meetings.

• Tough going from 3-point land for both as the first made three occurred in the second half at the 15:22 mark from Missouri. Prior to that both teams were collectively 0-for-28. Georgia’s first three came from Jojo Toppin at the 11:09 mark, breaking an 0-for-15 mark. The Tigers finished 6-for-21, while the Bulldogs were 3-for-20.

• The game’s leading scorer, Jordan Geist of Missouri, had 18 points. Entering the contest, Geist was No. 16 on the SEC scoring list, averaging 13.9 points per game.

• Sophmore Nicolas Claxton set to enter Georgia season record books. He currently owns 258 total boards on the season, which put him at a three-way tie at No. 19 with Trey Thompkins (2010) and Jerry Waller (1965). One more rebound would tie his teammate Derek Ogbeide’s sophomore mark in 2017. Also Claxton’s 8.6 rebounds per game average is currently tied with Yante Maten (2018) at No. 23. Additionally, he is five blocks away from No. 6 Lavon Mercer (1980).

• Six seniors were honored pregame for Senior Night and all logged minutes in the game. Guard Turtle Jackson had three points, one assist, and one steal in 28 minutes. Guard Christian Harrison started his sixth game of the season and had two rebounds and a steal in 15 minutes. Forward Derek Ogbeide had five points, two rebounds, two blocks and a steal in 16 minutes. Forward E’Torrion Wilridge had two blocks and a board in 18 minutes. Lastly, forwards Connor O’Neill and Mike Edwards played three minutes apiece with O’Neill hitting a free throw.

“There’s been so many good things that have been building inside of this team. I’m not going to look at it and say that we haven’t gotten better because we have. We wouldn’t have been in the games we were and we wouldn’t have beaten Florida. The bottom line is this, you got to be that way every night when it comes to the competitiveness. I want this season to close the right way, and that’s the most important thing, figuring that out.”

” I would not say we are disappointed, that is a negative word. We tried to take the positive within everything. We played very well against Florida, tonight we did not produce that well, being fluent on scoring or stopping the ball. It is tough for anyone to win if they are not doing that. We could be the Warriors out here playing, but if you are not getting stops and making shots it is tough. It is a learning experience. We still have South Carolina, we are going to go out there and give our all. Then I feel like we  can really make a run in Nashville if we stick together.”

“Coach told us that we just have to come out and be prepared for South Carolina. One more regularly season game, South Carolina plays very hard they are a great team. We just have to go out there and give 100%. Focus on winning that game with the scout team tomorrow, then after that go to Nashville and make some noise.”

“I am not disappointed at all! I have my beautiful mother and my handsome father come. We enjoyed this moment. Win or lose, draw I am really thankful for this opportunity that UGA has given me. And also Coach Crean even allowing me to step on out on this court today. I am come a long way since being a little kid in Franklin County, Georgia to being interviewed in front of all of y’all. Even thought we did not come out with the win tonight, my favorite saying is, it is what it is. So, when I wake up tomorrow I am going to meet with my teacher about my test, and go to practice and get ready for South Carolina.”

“We have to do a better job of rebounding. I see that I rebounded 50. I do not think I have been apart of rebounding that is that lop-sided. Rebounding is a big thing. Just making sure all five guys are locked in when they are on the court.”

On shooting and rebounding effort tonight…

“I will give credit to Missouri, they came out and had a good game plan. At the end of the day we missed a lot of layups that we usually make. We missed some shots we usually make. That is something we just have to work on. All five guys have to box out and just be locked into that. I think we will see them again in Nashville.”

“I would just say we are not throwing this year away or anything like that. We are going to focus on these last few games and give these games all we have. Make sure we just get back to the drawing board this summer like we did this past summer. Everybody worked hard. All we can do is, I hope the new guys coming in are ready to work. We are just going to get back to the drawing board.”