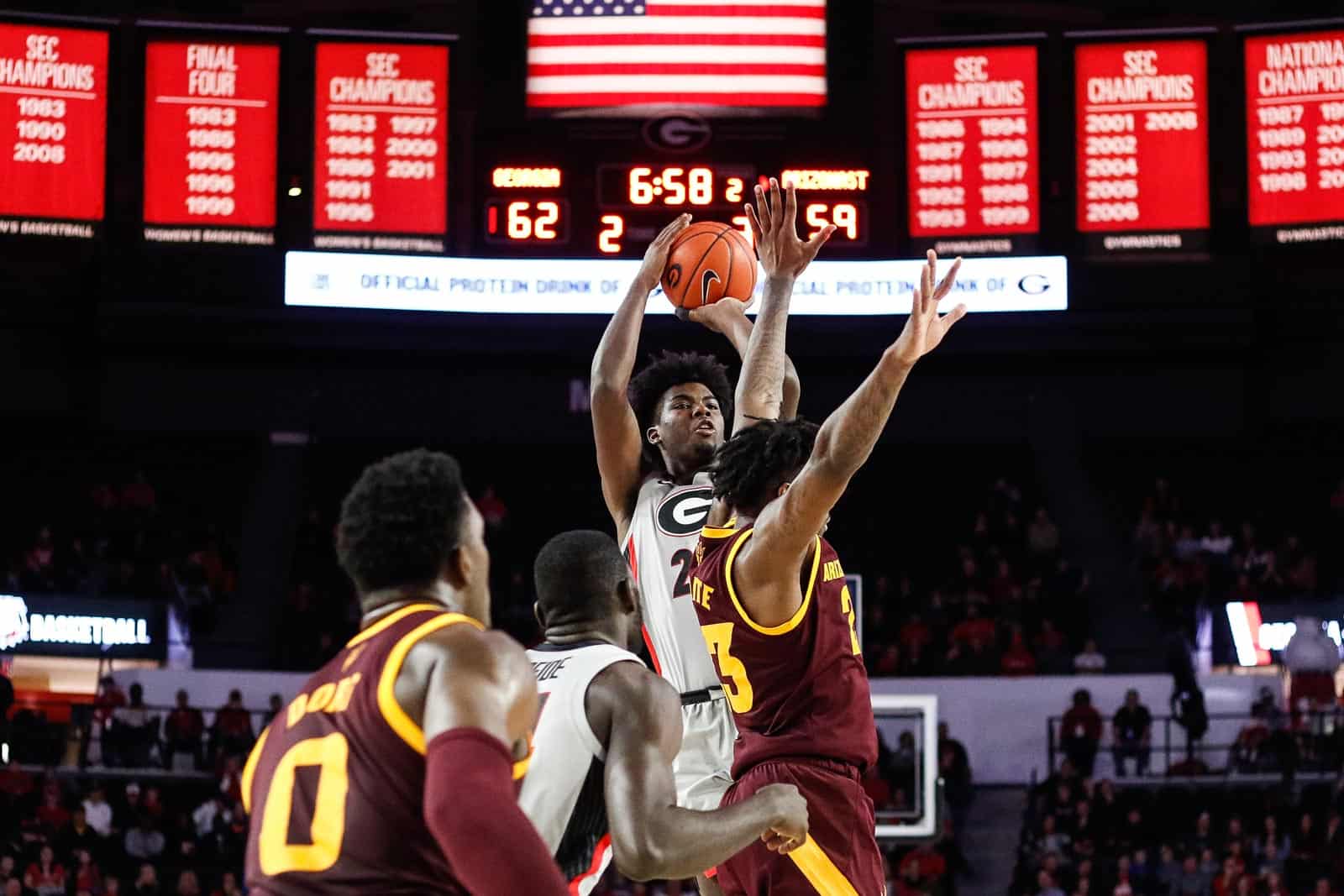 ATHENS, Ga. – The University of Georgia men’s basketball team fell in the final minute of regulation to the 20th-ranked Arizona State Sun Devils 76-74 in Stegeman Coliseum on Saturday night.

The top scorers of the night were sophomore Rayshaun Hammonds and junior Tyree Crump with 19 points apiece. Sophomore Nicolas Claxton led in rebounds (13) and blocks (4) for the sixth and eighth time respectively.

The Georgia Bulldogs dropped their first home game for the season and are now 4-1 in Stegeman. Georgia fell to 5-4 while Arizona State improved to 8-1.

“We still had our chances, but we didn’t execute at the end,” said Georgia head coach Tom Crean. “We need a team of guys who have a better understanding of what we’re trying to do at the end of the game. We had guys out of position in those situations. We haven’t been in many of those situations, but now we have. Now I learned and now we keep getting more and more guys ready for those situations. I appreciate the way the crowd was, big time. I thought they were great the entire night. We had 23 free throws in the first half, nine in the second half. We got out-rebounded in the second half. Those were the stories of the game. We couldn’t lose the foul line to them, and we couldn’t lose the rebound game. They were averaging 14 offensive rebounds, they got 15. They turned those into second chance points, points in the paint, and ultimately that hurt us.”

The Bulldogs had the first points due to a pair of free throws from sophomore Teshaun Hightower to claim the lead, which they kept up until the waning moments of the game. Both teams traded baskets and by the 11:50 mark the game was knotted at 15-all, the game’s last tie. A free throw from senior E’Torrion Wilridge and a tip in from freshman Tye Fagan brought back the Georgia advantage 18-15, which was retained for the half. Two points at the line from Claxon put the Bulldogs on a 9-0 run at 6:25, making the score 28-26.

Another basket from the line by Wilridge established Georgia’s first double-digit margin, 36-26, at 4:40 remaining. A spin move in the paint from Hammonds launched Georgia on its second 9-0 run for the half. Four free throws from Crump in the last two minutes inked the 18-point advantage, the largest of the night, which contributed the 47-33 score going into halftime.

Georgia went 20 for 23, 87 percent, from the line comprising the largest amount of points scored against Arizona State in the first half this year.

The Sun Devils grabbed five quick points to start the second half cutting the Georgia advantage to nine. A three from Hightower brought the margin back into double-digits at 17:54. Both teams exchanged points for the next ten minutes before Arizona State to cut the surplus down to three with 8:23 left in the half. A three from Hammonds brought the crowd to its feet and the gap up to six.

The Sun Devils came within a point of the Bulldogs, 70-69, with 3:11 remaining. Arizona State took the lead for the first time, 71-70 at 2:41 from a jumper. Claxton dunked to narrow the difference to one at 1:37. On defense, junior Jordan Harris stole the ball tossing it to Fagan for a tip in to regain the Georgia lead 74-73 with 25 seconds left. The Sun Devils regained the lead with a layup 15 seconds later, ultimately the game-winner. Georgia tried to find the basket but was unable to catch Arizona State solidifying the 76-74 Sun Devil victory.

The Bulldogs return to Stegeman on Tuesday, December 18, at 7 p.m. against the Oakland Golden Grizzlies on the SEC Network+.

• Arizona state is the sixth opponent Georgia has played this season that reached a 2018 postseason and the fifth team that had at least 20 wins last year. The Bulldogs are currently 2-4 in those games.

• Georgia’s undefeated home record in 2018 came to an end. The Bulldogs are now 4-1 at home this year.

• Nicolas Claxton had four of the team’s seven blocks. At the half, he had three. This marks his third game this season that he has had at least four blocks – a feat he did not do last season. He has 22 multi-block games in his 42 game career. In five games this season, he has at least three blocks. Last season, he finished with that same number (4) of three-block games.

• Nicolas Claxton, who is second in the SEC in rebounds with 9.0 a game, had a game-high 13 boards.

• Arizona State’s freshman guard, Luguentz Dort, entered the contest averaging 22 points per game. He finished with 12 points, tied for his lowest production of the year.

• Georgia’s defense held the Sun Devils to four three-pointers (4-of-16). They came in averaging 6.9 a game. Meanwhile, the Bulldogs went 8-of-22 from behind the arc.

• Georgia dipped into the bench for 35 points compared to Arizona State’s nine.

• Best two-game stretch in Tyree Crump’s career. He scored 19 this evening and 25 points vs. Texas Southern for an average of 22 in the last two games. The game marks his 11th career game with at least 3 threes. In all, 84 of his career 125 field goals are from behind the arc.

On the defense in the second half…

“Great teams talk on the floor. It takes time to get it, and it’s getting harder and harder in this day in age, but there’s no excuse not to. I tell them, grown man time is in the second half when you’re down there alone. When you don’t have a coaching staff or bench helping you call out the situations. That’s when it has to be grown men. Grown men, five at a time, together, helping each other out, and taking care of it. Frankly, that’s what wins. It’s a two-half game. A lot of people can guard and be fired up and energetic in front of their own bench. When you have to go down and take care of each other, that’s when you find if you take that step of maturity. For us, whoever is in the game, whether you’re 18, 19, or 20 years of age, it’s got to be grown man time when you’re down there defending, rebounding, and fighting teams, especially as good as Arizona State.”

On Rayshaun Hammonds fouling out…

“Losing Rayshaun killed us. He was having a really good game. He can do so many things. He’s our best in-bounder. He reads situtations, he can space, and he can play in and out. We gambled and lost. We had those guys in with four fouls because it was the crux of the game. We lost them and it hurt us.”

On the second half…

“As a team we need to come out better. That is something we need to work on. We need to improve on our communicating because everyone needs to know where they need to be on the court.”

On being out-rebounded in the second half…

On recovering from this loss…

“The best thing about basketball is that you have a lot more games. You can go on a winning streak and forget about this game, but we’re still going to think about this game because it was top one for us.”