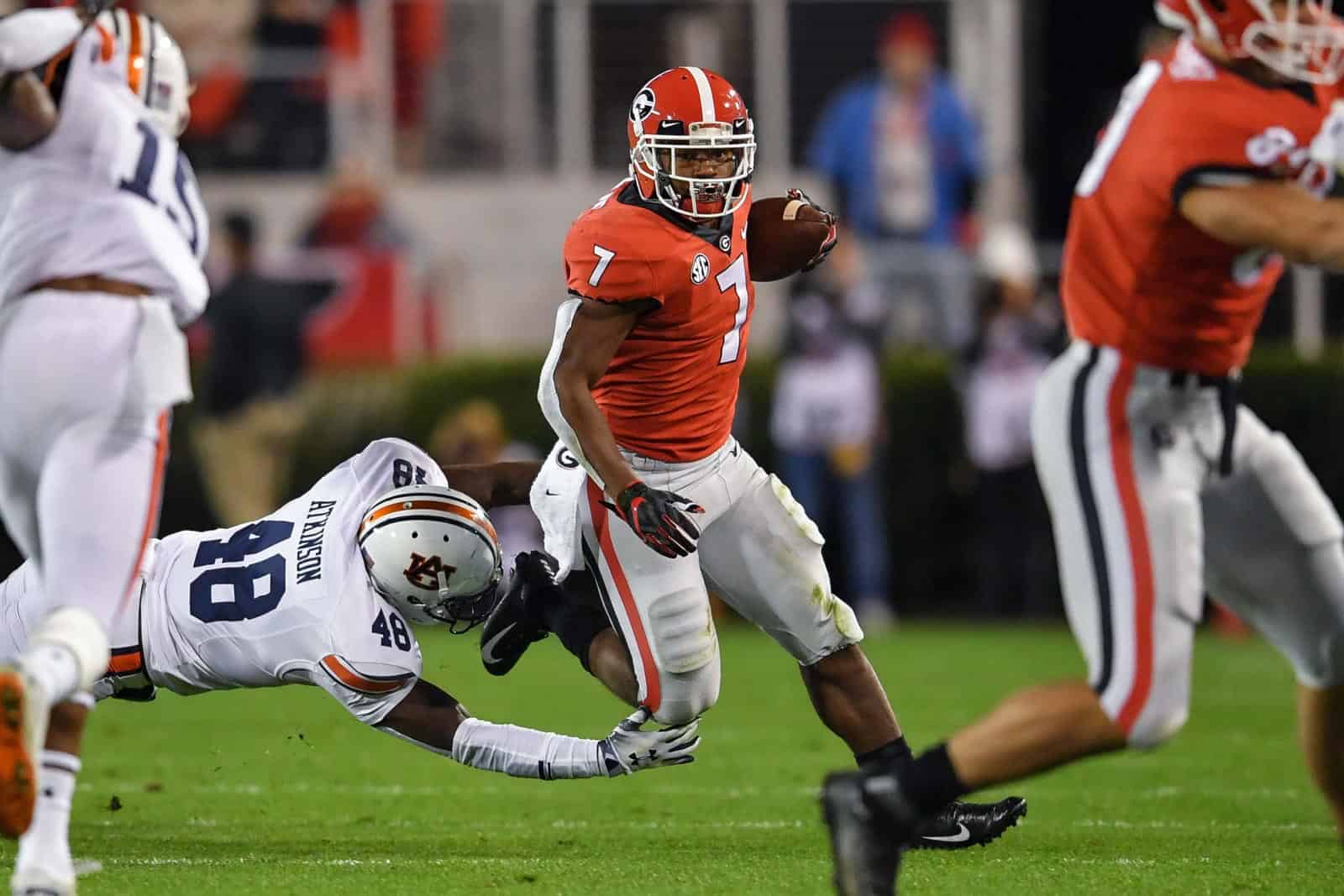 ATHENS, Ga. – Behind 303 yards on the ground and a scoreless second half, the fifth-ranked University of Georgia football team defeated the 24th-ranked Tigers 27-10 in front of a capacity crowd at Sanford Stadium on Saturday night.

For the third consecutive contest, sophomore tailback D’Andre Swift ran for over 100 yards, leading the Bulldogs (9-1, 7-1) with a career-high 186 yards on 17 carries. Swift also paced Georgia through the air, reeling in a team-high four receptions for 43 yards. Senior tailback Elijah Holyfield also registered 15 carries for 93 yards. The pair of tailbacks combined for 32 carries and 279 yards.

Sophomore quarterback Jake Fromm directed the offense, producing a 13-for-20 clip for 193 yards, helped by senior wide receiver Terry Godwin, who added a team-high 84 receiving yards and a touchdown.

Auburn scored for the final time in the second quarter at the 7:46 mark, halted by a Georgia defense led by sophomore linebacker Monty Rice with eight total tackles and sophomore defensive backs Richard LeCounte and Mark Webb with six apiece.

“We’re a work in progress,” Georgia head coach Kirby Smart said. “We’re fighting tooth and nail and we don’t panic…It was a physical game. We played a ton of guys on defense. I’m proud of the way the guys competed.”

After sending the Auburn (6-4, 3-4) offense to the sideline after its first five plays, the Bulldogs took the field to conduct a 10-play, 80-yard scoring drive. A 25-yard Godwin reception and a 22-yard Holyfield rush preceded a Rodrigo Blankenship 25-yard field goal for the 3-0 Bulldog advantage.

The Tigers responded on the next drive, using a 9-yard pass from Auburn quarterback Jarrett Stidham to John Shenker to establish the 7-3 lead. A 15-play, 73-yard Georgia drive followed, finalized with another Blankenship field goal to cut the Tiger margin to one.

The back-and-forth battle continued into the next Auburn possession, as the Tigers marched to the Georgia 5-yard line. A stout defensive stand – complete with an Eric Stokes pass breakup on a touchdown pass in the end zone – held the Tigers to a field goal for the 10-6 score.

With a kickoff return from the goal line, junior wide receiver Mecole Hardman placed the Bulldogs on their own 41-yard line, and the footwork of Georgia tailbacks Holyfield, Swift and Brian Herrien guided the Bulldogs to the Auburn 20-yard line. Fromm completed a 7-yard pass to senior wide receiver Ahkil Crumpton before connecting with junior Tyler Simmons in the end zone on the next play. Simmons’ first-career 14-yard touchdown claimed a Bulldog lead Auburn could not overcome in the remaining 32:47.

Three plays and 47 seconds after the Blankenship PAT, the Georgia defense sent its offense back onto the field with two minutes remaining in the half. Fromm connected with Godwin for a 38-yard touchdown, sending the Bulldogs into intermission with the 20-10 lead. The touchdown marked the fourth time this season Georgia has scored with less than two minutes remaining in the half.

Hardman guided the Bulldogs to favorable field position once again in the second half – this time for the defense – halting a Jake Camarda punt at the 1-yard line to place the Tigers’ offense inches from their own goal line. Auburn was forced to punt, and on the next Bulldog drive, Swift ran for a 75-yard touchdown, sealed with a Jeremiah Holloman block downfield. The Blankenship extra kick sealed the 27-10 final.

The Bulldogs return to Sanford Stadium on Saturday, November 17 for a matchup with the University of Massachusetts. The contest is slated for 4 p.m. ET on SEC Network. ​

*Bulldogs With Another Win In the Series: With tonight’s 27-10 victory over Auburn, the Bulldogs close out the SEC part of the regular season with a 7-1 league mark and improve to 9-1 overall. Georgia extends its series advantage over the Tigers to 59-56-8 in this the 123rdmeeting in the Deep South’s oldest rivalry. Georgia blanked Auburn in the second half, the third time the defense has done that this year (also Austin Peay & Middle Tennessee). Sophomore WLB Monty Rice led the team with eight tackles. The Tigers were limited to 274 yards of offense on 57 plays.

*300+ On The Ground Again: The Bulldogs, who lead the SEC in rushing at 233.8 yards per game, finished with 303 on the ground today after getting a season-high 331 yards in the road win over UK last Saturday. Overall, Georgia churned out 516 yards of total offense, the most since 560 against Vanderbilt this year. Sophomore TB D’Andre Swift went over 100 yards for the third straight game to highlight the Bulldogs’ rushing game.  Swift went for a career high 186 yards on 17 carries after going for 156 at #9 Kentucky last week.  This is the most yards for a Bulldogs’ running back since Nick Chubb exploded for 222 versus North Carolina in the 2016 season opener.  Swift also had a team-high four catches for 43 yards. Junior TB Elijah Holyfield also carried the ball 15 times for 93 yards.

*Cashing In: Georgia had the ball for 20:02 in the first half and outgained Auburn 266 to 149 in total yards as the Bulldogs surged ahead 20-10.  After starting with two field goals, Georgia had a pair of touchdown passes, including one in the second period’s final minute.  On their second touchdown drive, the Bulldogs went for it on 4th-and-2 from the Auburn 38-yard line and sophomore QB Jake Fromm delivered a scoring strike to senior WR Terry Godwin.  Georgia is now 3-for-5 on fourth downs this season.  This five-play, 69-yard drive took 1:39.

This is the Bulldogs’ fourth score at the end of a first half this year with less than two minutes to go.  Versus Austin Peay, Georgia scored a touchdown in 1:10 on a four-play, 70-yard drive to end the half.  Against South Carolina, the Bulldogs managed a field goal in 43 seconds on a five-play, 40-yard drive.  Versus Florida, Georgia connected on a field goal at the end of a seven-play, 75-yard during a drive that took 50 seconds.

*Blankenship Puts Georgia On The Board: Junior PK Rodrigo Blankenship connected on a 25-yard field goal on Georgia’s opening drive to give the Bulldogs a 3-0 edge. Blankenship returned to hit a 20-yard chip shot at the 11:13 mark of the second period to cut Georgia’s deficit to 7-6. He is 17-of-19 on FGs this year.  Blankenship also launched touchbacks on four kickoffs of the game to give him 58 on the year, which is ranked second nationally.

The first drive started at the Georgia 12-yard line and the Bulldogs advanced to the Auburn 2-yard line before the Bulldogs settled for a field goal.  On the second drive, Georgia drove to the Tiger 1-yard line and then kicked four plays later. Late in the fourth quarter, the Bulldogs tried a fake field goal at the AU 14 and Blankenship overthrew Issac Nauta in the endzone. The drive did consume 8:44 as Georgia led 27-10 with 3:20.

*Special Specialist: Junior Mecole Hardman took his first kickoff return of the game from the goal line a season long 41 yards in the second quarter.  He came in averaging 25.7 each KOR this season.  The Bulldogs capitalized on the return by scoring their first touchdown of the game.  Fromm connected with junior WR Tyler Simmons for a 14-yard touchdown catch.  This marked Simmons first scoring catch of his career.  This put Georgia up 13-10 at the 2:47 mark in the second quarter. Freshman punter Jake Camarda had his first punt of the game on the Bulldogs’ opening drive of the third quarter.  On his second punt, Camarda hit his second 38 yarder of the game.  However, Hardman downed this one at the Auburn 1-yard line. Camarda only punted twice tonight.

*Points Off Turnovers: Georgia is +4 in turnover margin.  The Bulldogs have forced 14 turnovers that have led to 48 points and have 10 turnovers that have resulted in 16 points.  Fromm threw his fifth interception of the year in the third quarter on the Auburn 19-yard line.  The Tigers were forced to punt on the ensuring drive.

*Next Up:The Bulldogs (9-1, 7-1 SEC) play host to Massachusetts (4-7) in the first matchup between the teams next Saturday at Sanford Stadium.  The SEC Network will televise the game at 4 p.m.

On the win over Auburn…
“We didn’t play a perfect game. It was physical and we shot ourselves in the foot too much. We’re a work in progress. We’re fighting tooth and nail and we don’t panic. … It was a physical game. We played a ton of guys on defense. I’m proud of the way the guys competed.”

On D’Andre Swift…
“If we feed him, he does well. He’s got a great offensive line in front of him, he’s explosive and he makes guys miss on the second level. The wideouts deserve credit for some big-time downfield blocking too.”

On the team…
“We’re working hard and getting better. The guys are buying into what we’re selling. If we can keep improving as a team, if the guys keep buying in, we’ve got a good shot.”

On next week’s game…
“UMass presents a good offensive unit. We’ve got to get better this week and work on us.”

On Georgia’s fans…
“The fans were awesome. The students were packed in there. The fans represented well and impacted the game. We love that, and the recruits fall in love with it.”

On what changed with the defensive effort in the second half …
“It was just figuring out what they we’re going to do and then how we were going to finally adjust to adjust to it.”

On his pass breakup on a critical third down inside the red zone…
“We had our call and basically I knew I had him man-to-man, so I just had to lock on him. Luckily, I was able to break it up and just keep him out of the end zone.”

On the defensive goals for this game…
“We wanted to hold them to under 100 yards rushing, whether that’s any running back or anybody rushing, no 100-yard rushers. We wanted to hold them to 3 points, so technically we didn’t meet our goal, but they didn’t score in the second half. We’ve still got some work to do. We set a standard and we go get it, and we didn’t do that but we played well. Not saying we that we didn’t have a good win, but you don’t want to celebrate too much. We’re going to enjoy it tonight with our friends, family and our teammates. We’re going to come to the drawing board and start working again.”

On Georgia’s third-straight top 25 win…
“It feels great right now. I’m excited to look at the tape and see what I can correct and what the team can correct. Everybody has a job to do, and if we’re doing it to the best of our ability then we can’t be stopped.”

On Jake Fromm’s performance on third downs, with 8 conversions on third down…
“That’s something we really emphasize at practice. We have a day of the week where we emphasize third down and it shows on the field … We always put ourselves in that situation in practice, so when we get to the game it’s easy.”

On his first career touchdown reception, a 14-yarder with 2:47 to go in the first half…
“It just gave us a lot of momentum going forward in the game. Of course it feels good for me to get into the end zone, but it felt for the team to get some momentum going.”