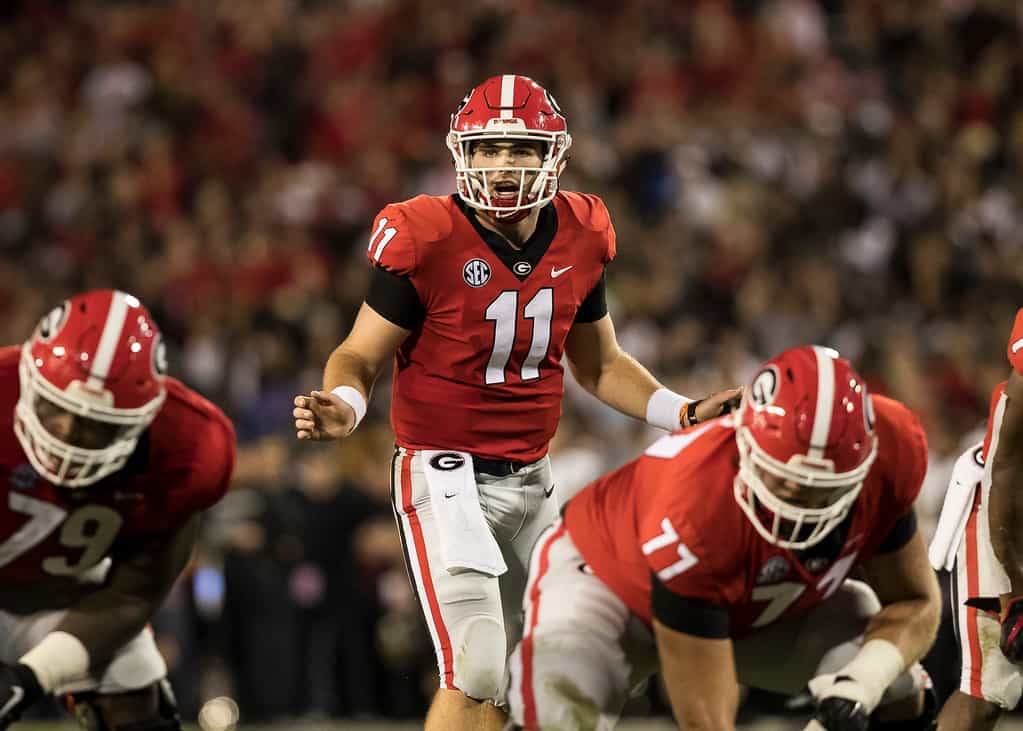 ATHENS, GA – Fifth-ranked Georgia continued its preparations for their SEC matchup against Auburn with a 2-hour practice on Tuesday afternoon.

”I thought we had a good one today. We got a little bit forced inside. It was nice outside, but we had wet grass, wet fields, so we practiced about half in and half out. The guys are fired up. There’s definitely a little more pep in their step when you’re playing Auburn. The pads are popping, so it’s good. Got to carry that into tomorrow.”

”I think he got a bruise or something. He got hit on one of those plays late in the half maybe. But he’s fine. He took all of his reps. He’s just got a wrap on it.”

On the status of offensive linemen Lamont Gaillard and Cade Mays…

”They’re both limited. Did a little bit of stuff today. Couldn’t do everything. They did some of it, so they’re day to day.”

How close is Divaad Wilson (freshman DB who was injured in spring practice) to getting some playing time late this season?

”He moved to start practicing more with us and not with the scouts, but that just means he’s cleared to play. It doesn’t mean he’s going to play. He’s got a lot to learn. He’s smart, he’s bright, he’s a good football player. But it’s not that easy. You don’t just take however long that’s been for him off. So we’re kind of trying to develop him and get him into position where he could play. So he’s repping at Star. He’s working with the Twos and taking a lot of reps. And the sooner he learns it, and he’s able to play, then hopefully he’ll get into that competition and mix it up.”

What type of conditioning goes into preventing the players from getting injuries?

”Off season, the strength and conditioning program, Scott and his staff, do a ton. Nutrition, everything you can think of. We try to put it together to try to keep them from getting injured. Obviously, it’s a contact sport. There are going to be injuries with it. But we do a lot of stretch & stride, they get a lot of recovery on Thursdays. We do everything we possibly can to try to take care of them. Soft-tissue injuries, meaning pulls, we’ve been really (knocks on wood) fortunate with those and we do a good job of not giving guys too many yards. Unfortunately, it seems like we’ve had a lot of shoulders, knees, ankles, those things that are just football injuries.”

What types of challenges does Auburn’s defensive front pose to your offensive line?

”They’re big, they’re physical, they’re quick, they’re athletic. A lot of them are gonna be high draft picks. We’ve been against them before. It seems like they’ve bene there forever. They’re talented, and they do a good job up front. I think the biggest thing is being consistent. You’ve got to keep chopping wood. You can’t expect to get a lot of movement early on those guys. They’re heavy and they strike. We’re gonna strike. Two guys striking each other, two stubborn teams. They wanna stop the run and we want to run the ball. We’ll see how it goes.”

There are reports that (def. coordinator) Mel Tucker is under consideration for the Maryland job. How do you deal with that in midseason?

”I don’t. I mean, you don’t deal with it. Mel’s one of the most professional people I’ve ever met. He’s worried about these guys and this team. He’s worried about coaching his tail off for them, leading the defensive unit and making the calls. I’ve been there and done that. I know what that’s like, to have your name mentioned in a lot of jobs. I know that Mel’s focus is on getting our guys ready to play.”

How does this weekend help your recruiting?

How much does losing a home game (because of the neutral-site game) affect your recruiting?

”It absolutely costs you a recruiting weekend. You don’t get to have anybody, but they don’t get to have anybody. So our version of our LSU-Alabama game is held in Jacksonville and we don’t have prospects. So that’s not conducive to recruiting, absolutely it’s not. It’s just the way it’s been done here before. It’s not great for recruiting because you lose a home game every other year and just comes with it. But certainly it helps to have more home games.”

You’ve seen a lot of good running backs in your career. Do you ever see (D’Andre) Swift make a move and go, ‘Whoa’?

”Yeah. The two moves he made on the same play last week were pretty incredible. They were explosive cuts, you know, going one way really fast, going from being a one-cut runner to planting and going the other way. That was definitely a ‘wow’ run. He’s had quite a bit of those since he’s been here. He puts them together back-to-back. He’s really explosive and fast. When you look for one cut, short quickness, he certainly defines that.”

How much does external talk about your team serve as motivation for the team?

”I think the players get into it. They like to look at it. They like to see it and they use it as motivation. I think the strength coaches sometimes use it as motivation. But I’m a big intrinsic motivation person. I think you’ve got to do it from within. You’ve got to do it because it’s the right thing to do. You’ve got to do it because you want to do it for your teammates. Because what happens when you play good and they don’t say that? Then you have no motivation. You’re always looking for the naysayers. I don’t think that’s big. Obviously, if those kids said that, they may think it’s important to them. I think we had a great challenge last week. We issued a challenge to them. The challenge was, ‘Here’s a team that’s running the ball really well. Here’s a running back who’s running the ball really well. You have an opportunity to go out and make a mark for yourself. But I don’t think it’s really about what other people say.”

Is there any validity to the talk of wearing black jerseys? What’s your stance on doing that kind of thing?

”We did it a couple of years ago against somebody. I think it was one of the ‘buy’ teams or something and did it for energy and enthusiasm. I don’t think you need energy and enthusiasm for Auburn. If you can’t get up for Auburn, then we’ve got some other problems. We’ve got to be excited to play, and I don’t think that (black jerseys) is relevant to me. I’m not saying that we’re not ever going to do it. I’m not saying that we are. That’s just not really what’s important to me. That’s just me. I believe in the guys going out and playing physical and playing hard, and you don’t have to do things like that to get ’em fired up to do it. I really think they should want to do it. It’s great for recruiting.”

Surprised that fans want to make a big deal out of that kind of thing?

So, to be clear, traditional red jerseys on game day?

”I guess, yeah. I mean, I’m not really concerned with that. I’ll let you guys get the hits and the likes on that. I just want to get the team ready to play.”

I think we played pretty good. I mean, we were working on it and trying to get better because obviously against LSU we didn’t play very well. So we just try to focus on our fundamentals and technique. Towards Auburn, we just hope to stop the run better. (On getting to play at home for the first time in five weeks) It’s always good when we play at home. We love the home crowd and it’s a great experience to get to play in front of the home fans. I honestly wish it were an earlier game, but anytime in the day is great being at home. You just wait all day before you play the game.”