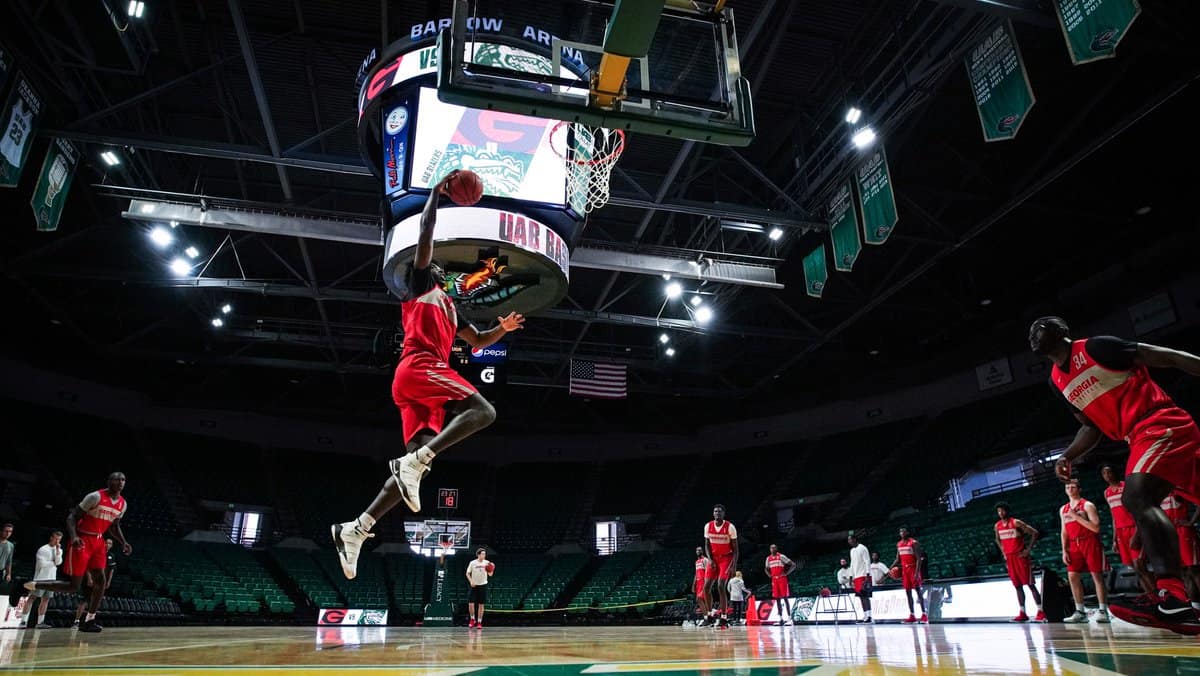 BIRMINGHAM, Ala. – A 56-54 win against University of Alabama at Birmingham in a Red Cross charity exhibition game started the Tom Crean regime with Georgia men’s basketball on Thursday evening at the Bartow Arena.

In May, the NCAA set guidelines allowing programs to use one of their preseason events as a way to benefit a charitable organization involved in providing relief for those affected by a catastrophic event. This year, natural disasters the Red Cross is providing relief for include wildfires in California and recent Hurricanes Florence and Michael.

“This is why we schedule something like this,” Georgia head coach Tom Crean said. “This is going to help both teams. There is no doubt about that. For us to come out of here with a victory is good and we learned a lot about our team. We didn’t play E’Torrion Wilridge at all in the first half, we started him in the second half and he set the tempo for us against #1 (UAB’s Zack Bryant) who I believe will play in the NBA one day. He can play in any league in the country. We just found a way to win. We are so far away from understanding our offense in cutting and moving and we aren’t a great shooting team yet. But the bottom line is that we found a way. That is something we can build on. I’m really proud of how we defended and played with physicality, awareness and intent.”

The first points of the game came from forward Derek Ogbeide, the other Bulldog senior who participated at SEC Media Day on Wednesday at Birmingham’s Grand Bohemian Hotel Mountain Brook. Assisting on the play was a new face, Ignas Sargiunas, a freshman from Kaunas, Lithuania. A few minutes later, the Lithuanian did the scoring himself, draining a three-pointer. The game remained close throughout the first half with no lead exceeding six points and four ties. Late in the half, junior guard Jordan Harris connected on a three for a 21-all score, but Georgia trailed 27-25 at intermission.

To start the second half, Hammonds scored Georgia’s first two baskets before junior guard Tyree Crump sunk a three to tie it at 32-all. Edwards gave the Bulldogs their first lead, 39-38, at the midpoint of the second half and Wilridge extended it to three points with 8:19 to play.

The Blazers recaptured the lead up to four points, but a transition layup and free throw by Wilridge put Georgia back on top 47-46 at the 5:42 mark. Blazers went back up and after a UAB timeout; Hammonds began his late surge cutting it to 51-50 on a three-point play with 3:58 left in regulation. The Blazers only managed three points from the line the rest of the way through.

The Bulldogs will return to action on Thursday, Nov. 1, when they host Division II West Georgia at Stegeman Coliseum at 7:00 p.m. Georgia’s first regular-season game is set for Friday, Nov. 9, against Savannah State at 8:30 p.m. That evening will feature a Georgia Basketball doubleheader, with the Lady Bulldogs hosting St. Bonaventure and tipping off at 6:00 p.m.