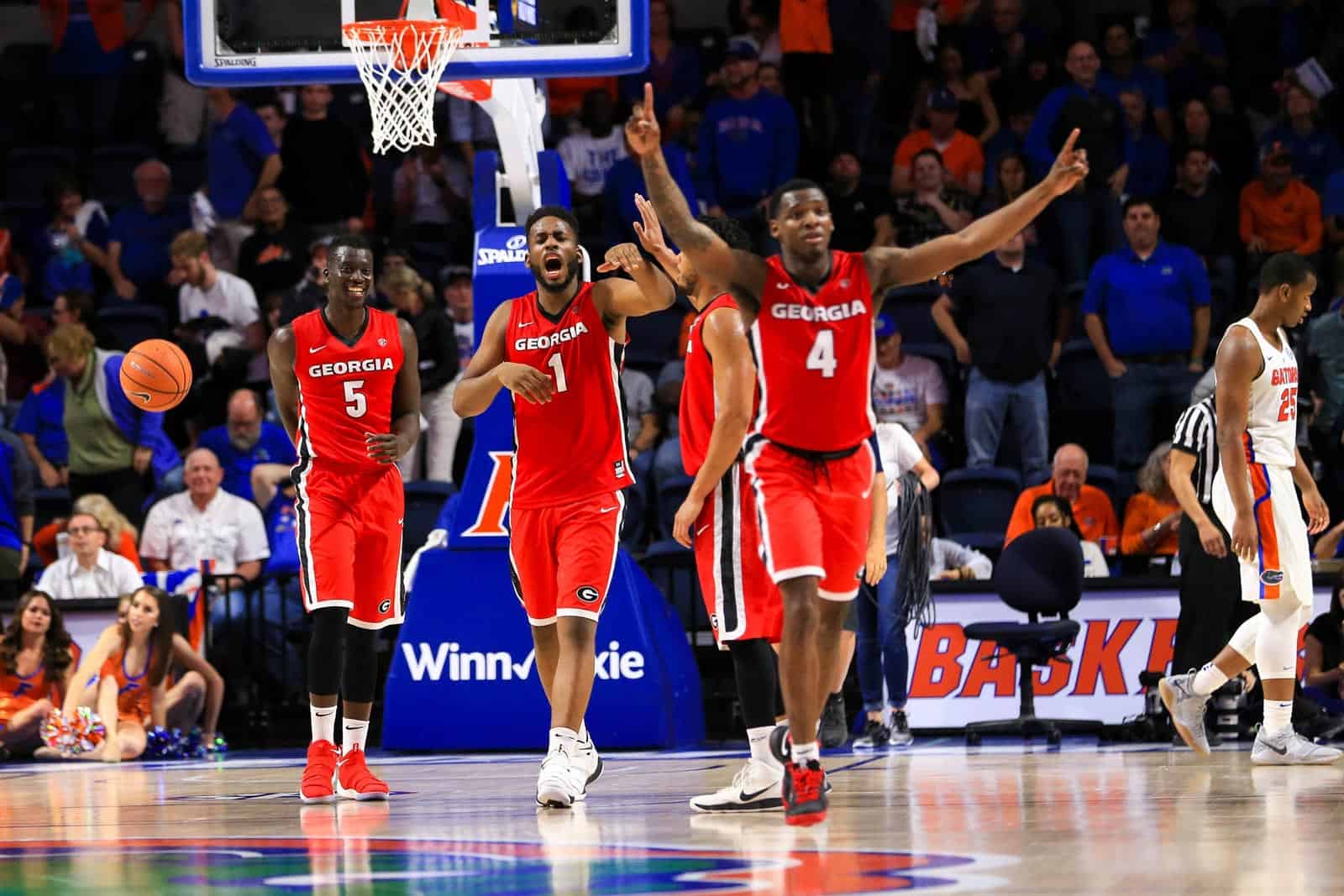 GAINESVILLE, Fla. – Surging back from a double-digit second-half deficit, the Georgia men’s basketball team tied the game at the end of the regulation and surpassed the Florida Gators in overtime, 72-69, Wednesday night at the Exactech Arena.

The Bulldogs’ win in Gainesville is the first since 2002 and it is the first time Georgia has defeated Florida twice in a season since 1997. Georgia improves to 14-11 overall and 5-8 in the Southeastern Conference, while the Gators fall to 17-9 and 8-5 in the SEC.

“We just kept competing,” Georgia head coach Mark Fox said. “We did a really good job defensively, which then gave us a chance offensively to find a rhythm. We had a lot of guys chip in and play well. I’m very proud of our team, especially after the last few weeks, how hard it’s been for them. I’m really proud of our kids.”

Georgia finished the second half on a 20-9 run after the 10:00 mark when Florida led 50-39. Sophomore guard Tyree Crump initiated the course with a three to put it under double digits. After a Florida free throw, Georgia rallied off eight-straight points to make it a one-point game. It started with a gritty Yante Maten bucket under the basket after he muscled two offensive rebounds in traffic. After a Florida turnover, senior Pape Diatta grabbed his own rebound off a miss, which set up a Crump-to-Derek Ogbeide dunk. Next, Parker drew a foul and knocked down both free throws. Lastly, Ogbeide converted on another jam to slim Florida’s lead to 51-50 at the 3:33 mark.

The Gators awoke to a six-point run that pushed their lead back to seven with a little less than a minute and a half remaining in regulation. However, Crump drained a trey that brought it to 57-53 at the 1:08 mark. After the Bulldogs forced a Florida shot-clock violation, a pass inside slipped past Maten’s fingers and went out. Florida converted two free throws, before Maten earned redemption with a long three to make it 59-56 with 15.8 left in regulation. On the ensuing inbound play, Florida guard Jalen Hudson caught the ball and dragged his foot, prompting a travel call to flip the possession back to Georgia. In almost a mirror image of Georgia’s last possession, Crump swung the ball over to Maten who drained a three to send the game into extra time at 59-all.

In the opening possession of extra time, Crump assisted Maten for the third-straight basket. It marked Georgia’s first lead since the first half and it would not be relinquished despite Florida’s continuous attack. Florida went 1-of-2 at the line to pull within one, but Derek Ogbeide’s soaring two-handed dunk off another assist by Crump pushed it to a 3-point Georgia advantage. After two missed Gator free throws, Crump hit his third three of the game to make it 66-60 at 3:07. Florida answered with a three, but Maten countered with a shot off the glass. Two Gator free throws made it 68-65 with a little more than two minutes on the clock, but two key Ogbeide rebounds in the next two possessions helped Georgia secure the win. First, Ogbeide grabbed an offensive board that gave Georgia the ability to reset the play-clock, then a defensive rebound on Florida’s next shot. Four Georgia free throws down the stretch proved enough to hold off the Gator’s last stand.

Maten accumulated 23 points and 10 rebounds; both team highs, for his ninth double-double this season. Ogbeide also registered a double-double with 10 points and 10 boards, marking his eighth of the season. Crump finished with 13 points on three 3-pointers and four free throws, while pulling in five assists and five rebounds – both career highs. Lastly, Parker chipped in 10 points for his third-straight double-digit scoring game.

At the half, Georgia trailed 34-27 despite shooting a slightly higher field goal percentage, however the seven Gators’ threes was the first-half determinant. Rayshaun Hammonds and Maten each had team-high seven points with eight of the combined 14 points coming from the free-throw line.

Next up, the Bulldogs play the Tennessee Volunteers Saturday at 6 p.m. in Athens.

On message to team after win…

“There’s obviously tremendous love within our team. They care about each other. I told them, one of the reasons they won the game tonight is because they have good character. They relied on that to keep competing and to trust each other. Certainly a win like this really feels good to them, and I want them to enjoy it.”

“He’s a winner. He cares so much about Georgia, about winning. He doesn’t really care about himself. He cares about this team far greater than he cares about himself. He made a lot of really big plays for us, a couple of big baskets. He got Derek some great looks, and Derek, I thought had a terrific game at both ends, and that was really key for us also.”

“I made a point to try to get Rayshaun involved early, and he was able to get to the line and get going. It was good to see Derek get some baskets, but obviously balanced scoring has been a challenge for this group. But tonight we finally found it and tied it into a good defensive performance, and that’s how you beat a top-30 team on the road. That’s a great win for us.”

“This league is so good and so deep that there are no easy nights. I’m going to let these kids enjoy this win until I see them tomorrow because they’re not going to be able to do anything about Tennessee until they know the game plan when we sit down tomorrow.”