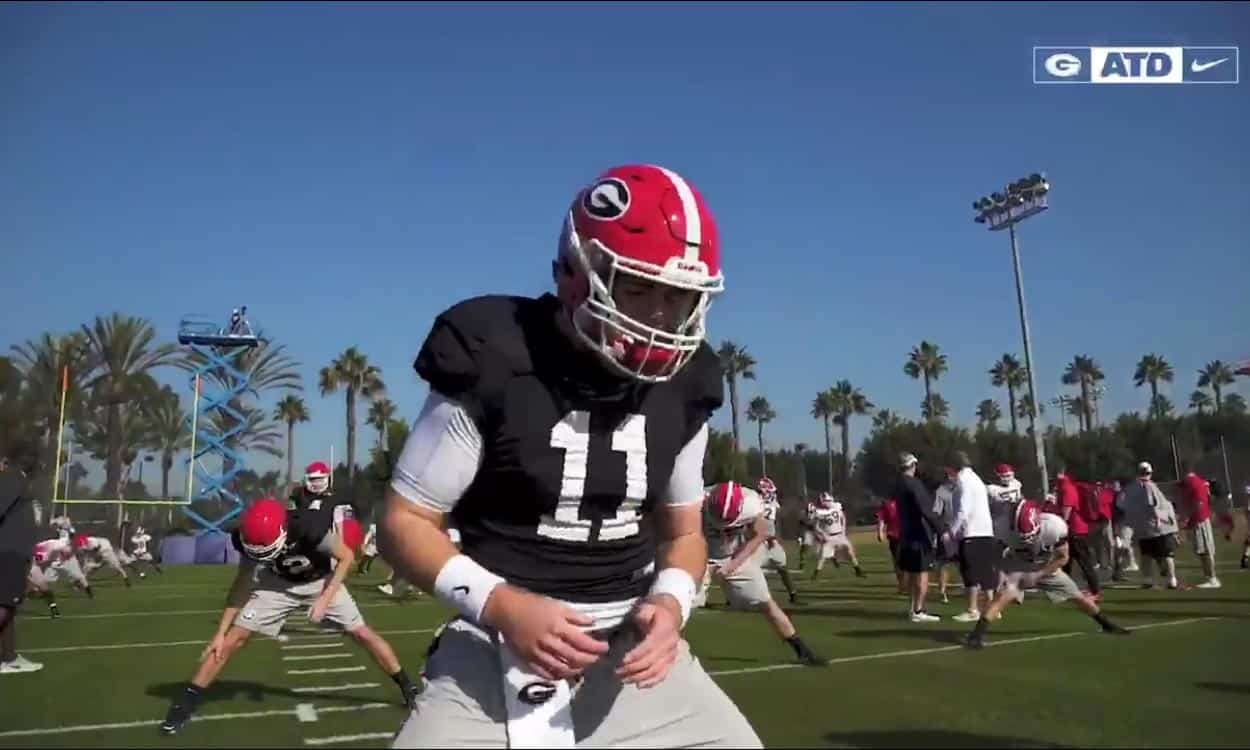 The Bulldogs practiced for 90 minutes in jerseys, shorts, shells and helmets as they continue preparations for the upcoming Rose Bowl Game against Oklahoma in a College Football Playoff semifinal.

Georgia arrived in Los Angeles Tuesday evening following a brief break for the holidays. Along with Wednesday’s morning practice, the team visited the Disneyland Resort plus made an appearance at the ESPN Zone in the park.

Georgia head coach Kirby Smart, along with the four Bulldog captains (seniors Nick Chubb, Sony Michel, Isaiah Wynn and junior Roquan Smith), took part in an official Welcome Press Conference at the resort. The group also rode one of the top new attractions, the Guardians of the Galaxy – Mission: Breakout. The elevator ride hurls guests up and down.

“Roquan was next to me on the ride; he squeezed my arm, and as you know, he’s pretty strong,” said Smart. “I think the other three guys were fine, although Sony said he may have eaten a little too much before the ride.”

“We had warm weather out at practice today, and we are pushing the guys a bit,” Smart added. “They were enthusiastic and had good tempo as we work on the offensive and defensive game plan.”

“It’s great to be out here and playing in the Rose Bowl Game, this one is big,” said Michel. “I know the seniors are getting a lot of credit from the media for this season, but it’s the whole team, the younger guys, the freshmen, they helped make it happen, and they deserve credit too.”

“It’s going to be a great matchup on both sides of the ball,” said Wynn on the upcoming Rose Bowl game with the Sooners. “We got back out there at practice because we are treating this as a business trip, and we needed to put the work in today. At the same time, it’s good to have an opportunity to come to Disneyland and step away from football for a few hours and enjoy our time together here as a team.”

Thursday’s schedule will feature a morning press conference involving Bulldog offensive coordinator Jim Chaney and five Bulldogs from the offense at the Rose Bowl Game media hotel. The team will hold an afternoon practice at the Stub Hub Center and then be treated to a show at the Improv Comedy Club.

Georgia will have daily practices through Saturday before a final walk through on Sunday. Kickoff for the Georgia-Oklahoma Rose Bowl Game will be Monday, Jan. 1, 2018 at 5 p.m. ET and be televised live by ESPN.