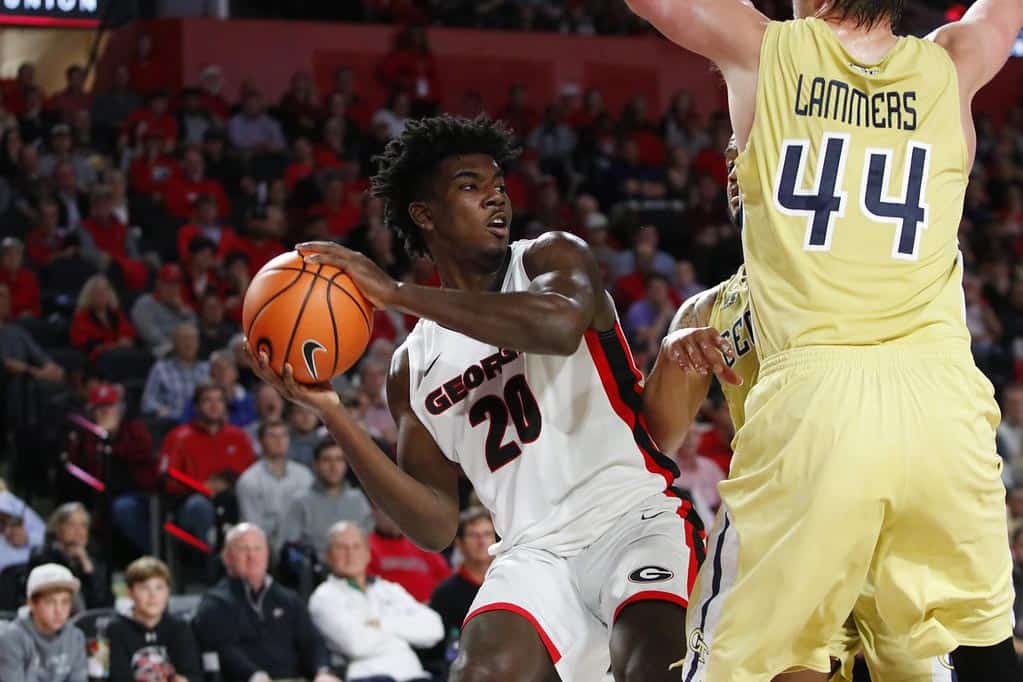 Georgia remains undefeated at home this season at 5-0. The Bulldogs move to 54-30 in Athens in the series against Georgia Tech. In the series’ last three games, Georgia has won by an average margin of 17.3 points per game, but the 21-point margin tonight was the largest in the three games. The last time the Bulldogs had three double-digit wins in a row over Tech was in 1912-14.

Maten led in points with 24, in addition to securing his 10th consecutive double-digit scoring game of the season. He is now averaging 19.2 ppg. The 20-point output is his fifth this season including his third-straight and 27th in his career. Also, his six rebounds puts him at 696 total rebounds, sliding past Trey Thompkins in Georgia history and into the No. 10 spot.

“We have a deep team, that’s one of the strength’s of our team,” said head coach Mark Fox. “We have a number of guys who can play. We have a lot of guys who can contribute and in the second half we felt like our depth might be a factor in the game and it probably was.”

The Yellow Jackets (5-5) secured an early lead putting the first points on the board, but Georgia answered with a 3-pointer and a free throw from Hammonds. The lead then changed three times in the first seven minutes, until the Bulldogs obtained the 11-9 lead at the 15 minute-mark with a dunk from junior forward Derek Ogbeide.

Midway through the first half, Georgia exploded on a 15-4 run, kickstarted by a jumper and a dunk from Maten. In that span, Georgia held the Yellow Jackets scoreless for 3:56, producing nine unanswered points for the 26-17 edge. That run enabled the Bulldogs to edge out the lead for the rest of the half, closed out by five points from Maten for the 36-34 margin. Georgia’s 48.3 percent shooting was the best first-half shooting this season.

Georgia kept the momentum going in the second half with a layup from Ogbeide, beginning the 8-2 Georgia run over the Yellow Jackets in the first four minutes. A three from Hammonds brought the Bulldogs to a double-digit lead over the Yellow Jackets, and junior forward E’Torrion Wilridge then added a three of his own. This was followed by a defensive rebound by Crump, who found Wildridge at the basket for the dunk and the 56-34 advantage.

Georgia maintained a 10-plus point margin over Tech for the majority of the half. A layup by junior guard William Turtle Jackson II brought the Bulldogs 21 points over the Yellow Jackets with two minutes remaining. Georgia held Tech without a field goal for the 4:40 of the game, clinching the final score of 80-59.

The Bulldogs return to action against the Temple University Owls on Friday, December 22, at 1 p.m. in Stegeman Coliseum.

• Georgia remains undefeated at home this season at 5-0. The Bulldogs move to 54-30 at home in the series. In the series’ last three games, Georgia has won by an average margin of 17.3 points per game. The 21-point margin tonight was the largest in the three games. The 3-game win streak is Georgia’s first since a 4-game win streak in 1952-54. The last time the Bulldogs had three double-digit wins in-a-row over Tech came in 1912-14.

• The Bulldogs shot a season-best 58-percent from the floor, and held Tech to its second-lowest shooting clip of the season at 36.7-percent. Georgia’s 80 points are the most this season against Tech.

• Georgia becomes the first opponent to score more than its season average against Tech this season. The Bulldogs entered averaging 73.1 points per game.

• From 3-point range, Georgia sunk a season-high nine threes (9-19) for the second-best average this season at 47.4-percent. The Yellow Jackets entered shooting 34-percent and managed just 2-of-13 tonight for 15.4-percent.

• In the first 9:30, the game was tied five different times, while the lead changed over five times as well. Georgia held the lead the rest of the way from that point.

On the packed house at Stegeman Coliseum…
“What a great night for Georgia. We have a new arena and we had a packed house and we had a great opponent. It was a beautiful night of college basketball, both teams went toe-to-toe in the first half and I thought both teams played well. I thought in the second half we buckled down defensively and got off to a very unselfish and efficient start to the half and we played a pretty complete 40 minutes.”

On finishing the non-conference strong before starting SEC play…
“I think that we have a team that can still get better, I expect our team to get better. What I like about our team is that we think we can get better and we want to get better.”

On what this team can achieve…
“I think this is one of the better teams I’ve played on since I’ve been here. We’re offensively and defensively well-rounded. We’ve got height, we’ve got speed, we have pretty much the whole package that we need.”

On the key’s to beating Georgia Tech…
“We played hard, played up-tempo and just played our game in transition. In the first half they were taking off in transition on the offensive side so you ad to get back and guard your man and not let them get to the baseline.

On being more aggressive…
“We’ve been practicing hard and watching film to see how we can attack them. When you watch film you see what the defense is doing and you find ways to attack them. They were switching their defense up so we just had to let it come to us and not rush anything.”