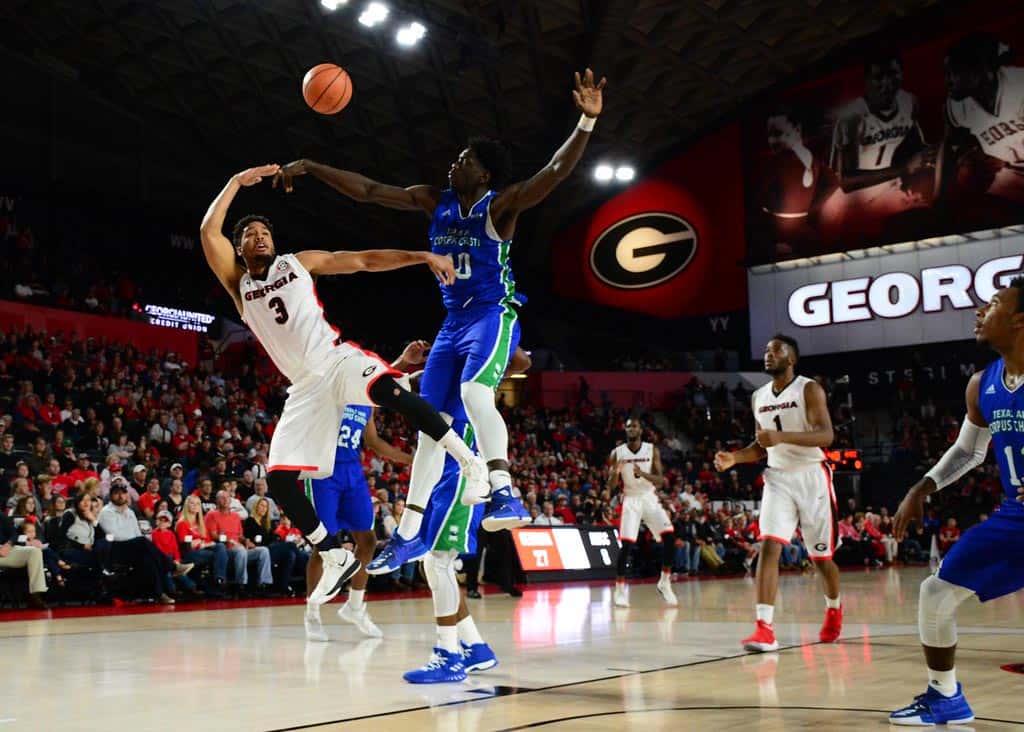 Senior forward Yante Maten posted his third consecutive double-double of the season with 19 points and 13 rebounds in addition to shooting 8-for-8 at the free throw line. Freshman forward Rayshaun Hammonds also followed with 15 points, marking his third-straight double-digit scoring output of the season.

“What I like about our team is that we have a lot of guys who are learning new roles,” said Georgia head coach Mark Fox. “I think that we got a fairly deep team. Hopefully, we can cut out some mistakes.”

Georgia held the Islanders to 16 points, the lowest of a Georgia opponent in the first half this season. The Bulldogs opened the game with a run of 11 unanswered points during the first 4:52 minutes. Three buckets from junior forward Derek Ogbeide, sophomore guard William Turtle Jackson II, and Maten, in the first five minutes of the game gave Georgia the lead over Texas A&M Corpus Christi (1-3) which it maintained for the remainder of the half.

Back to back threes from Hammonds and sophomore guard Tyree Crump continued the Bulldogs momentum, and Georgia posted an 11-5 run to close out the half leading 30-16.

Texas A&M CC chipped away at Georgia’s lead enabling them to tie the Bulldogs, 36-36, at the 14 minute mark. Prompted by freshman forward Nicolas Claxton’s tip-in and free throw, Georgia was able to regain the lead. From there, the Bulldogs marked a nine to three run over Texas A&M CC.

The Islanders fought back to tie the score two more times in the last 10 minutes. At the 1:54 mark Ogbeide and Hammonds each posted a block on defense to put the ball back in Georgia’s possession, enabling Hammonds to get to the free throw line for the 60-55 lead.

Georgia also withstood the Texas A&M CC battle on the free throw line with 12 of the last 21 points coming from behind the line. In the last minute of the game, sophomore guard Jordan Harris tipped in the ball to bring the score to 64-60. With seven seconds left Crump banked two free throws to secure the game for the Bulldogs, 68-65.

Head coach Mark Fox and his wife Cindy are donating $1 to two local charities for every fan that attends the Bulldogs’ three November home games. The donation will be split equally between the Boys and Girls Club of Athens and the Clarke County Mentor Program. Last Friday, Georgia drew 7,387 fans for the season opener against Bryant, the Bulldogs’ largest crowd for a home opener since 2007. A total of 5,369 fans attended Tuesday’s game against USC Upstate, meaning the Foxes have already pledged to give $6378 to both organizations, prior to the crowd from today’s game being added.

• Twelve of Georgia’s last 21 points came from the free throw line. For the game, the Bulldogs were 21-of-29 from the charity stripe. Yante Maten remains perfect from the line this season as he made all eight attempts today. He is 23-for-23 on the season.

• With 19 points, Yante Maten is now 12 points away from Kenny Gaines’ career total of 1,324 points. Gaines sits at No. 20 on Georgia’s all-time scoring list.

• Georgia maintained the edge on the glass, out rebounding the Islanders 36-27. Junior Derek Ogbeide hauled in a season-high nine rebounds.

• Sophomore guard Jordan Harris made his season debut and notched seven points. He scored on a lay up with 40 seconds remaining to give Georgia a four-point lead and sunk two free throws at the end to give the Bulldogs a three-point cushion.

• A strong Georgia defensive first half held the Islanders to 16 points, the lowest first-half output by a Bulldogs opponent this season. The Bulldogs started on an 11-0 run and later forced AMCC to go 0-for-9 shooting over a span of 6:02. The islanders were 7-of-27 (26%) from the floor in the first half.

On what he thinks his team needs to improve on…
“We’re turning the ball over like crazy. That has to change. Our turnover count has got to come down. And I’m not real pleased with our defense at this point.”

On the energy on the floor…
“We need to win. We need to do everything that correlates to winning, a lot of talking. Do everything right. Take it one possession at a time.”

On the game…
“Not to pleased at all. Getting the win of course was my biggest concern, but not to pleased.”

On improving on turnovers…
“Listen to the coaches, follow their lead.”

On game takeaways…
“We need to take care of the ball better, we need to be stronger. We got the win tonight so that’s good.”

On the communications on the floor…
“Just to bring energy. Those on the court had to motivate people at the time.