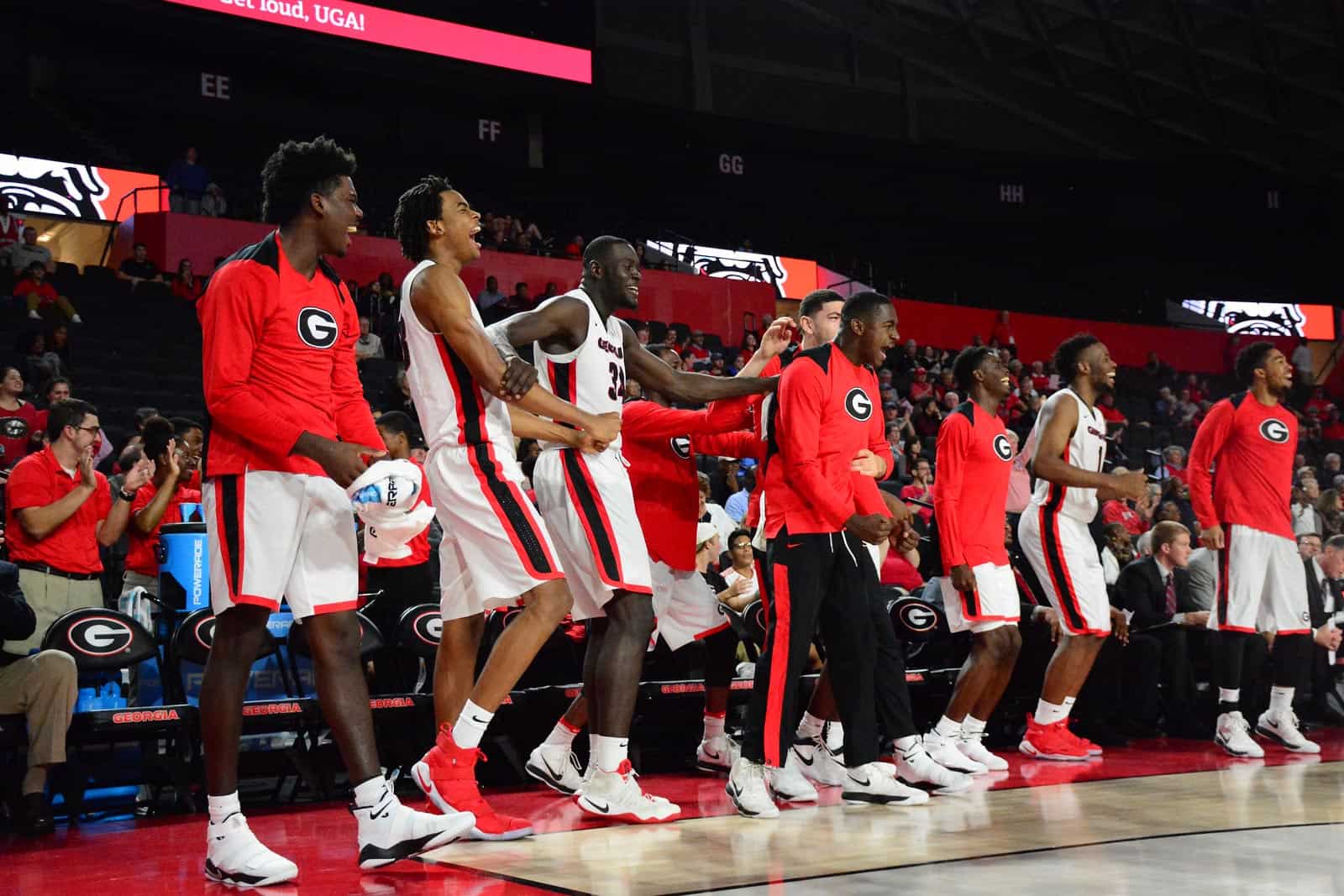 FULLERTON, Calif. – The Georgia Bulldogs men’s basketball team overtook the No. 21 St. Mary’s Gaels with an 83-81 overtime defeat in the Wooden Legacy at the Titan Gymnasium on Sunday.

The win captured head coach Mark Fox’s 150th victory at Georgia. The Bulldogs improve to 5-1, which is Fox’s best start since the 2010-11 season.

Trailing by two with 16 seconds in regulation, Georgia returned from a timeout with a contested William Jackson II layup off the glass to knot the game at 71. After an empty Gaels possession, the game was forced into overtime.

For the final go-ahead points in the extra period, redshirt senior Juwan Parker pieced together a three-point play for the 76-75 lead with a jumper and a free throw. Sophomore Tyree Crump drained both a baseline pull-up and a three-pointer, topping his career-high in points and stretching the Georgia edge to four.

After St. Mary’s brought it back to a one-score game, Jackson hit a pair of free throws with 16 seconds left to strengthen the lead back to four. A late Gaels’ jumper at the buzzer wasn’t enough, and the Bulldogs sealed the 83-81 victory.

“It was a team win,” Fox said. “I’m very proud of our young people. We’ve had a tough couple days. We’ve had 10 guys get the stomach flu up to tip time today. To battle through that the last couple days and compete today like a unit and beat a very good St. Mary’s team — I’m extremely proud of our players.”

“They ended the game with only four three’s, and all by the other power forward (Evan Fitzner),” Fox said. “We wanted to take the wing players’ threes away and we were able to do that too. (Jock) Landale is a great player and he had a big night, but Derek’s (Ogbeide) physicality, I thought was a really important part of the game.”

Georgia and St. Mary’s battled back-and-forth throughout the game, exchanging the lead 25 times with 11 tied scores. In the close affair, Georgia led by as many as six points in the opening frame. With just under two minutes left in the half, Maten and Mike Edwards put up back-to-back buckets to reestablish the Georgia lead, which held at intermission, 35-34.

Tied at 45 in the second half, Crump produced consecutive three-pointers – including a four-point play on the second basket for the 49-45 lead. With his third three-pointer of the game a few minutes later at the 11:35 mark, the sophomore matched his career-high from behind the arc and provided Georgia an eight-point lead.

St. Mary’s led by two at 69-67 with three minutes left in regulation, before Parker hit an equalizer with 43 seconds left. After Landale moved the Gaels back on top, Jackson’s layup forced the extra period.

The Bulldogs posted a season-low nine turnovers, despite the extra period. In the second half and overtime, Georgia turned the ball over only three times. Georgia also bested the Gael’s in free throws, as the Bulldogs notched 10 to St. Mary’s three.

Georgia returns to the road to face Marquette on Saturday at 2 p.m. ET.