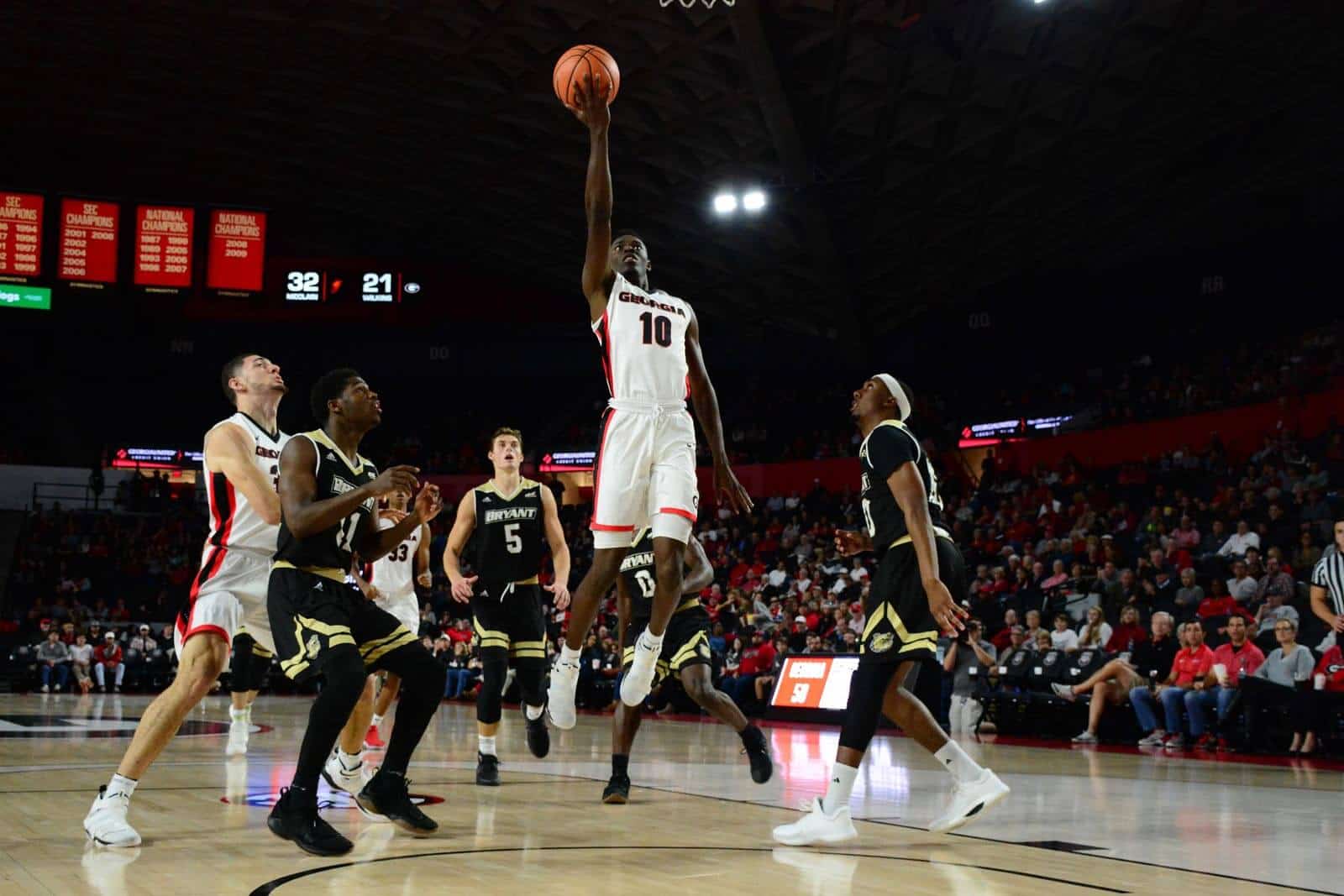 ATHENS, Ga. – The Georgia Bulldogs men’s basketball team opened the 2017-18 regular season with a 79-54 defeat of the Bryant Bulldogs on Friday night in Stegeman Coliseum.

The win marks Georgia’s largest margin of victory in a season opener since its 107-65 defeat of Jacksonville State in 2007. The Bulldogs separated themselves by as many as 35 points in the second half.

Senior forward Yante Maten headlined the Georgia attack with 21 points, 12 rebounds and four blocks for the conference-leading 17th double-double of his career.

Freshman forward Rayshaun Hammonds followed, celebrating his 19th birthday and becoming the first freshman to start a season opener since Kentavious Caldwell-Pope on Nov. 11, 2011. Hammonds surpassed Caldwell’s 15 points with 17 of his own, complimented by seven rebounds.

“It always feels great to start the season with a win,” head coach Mark Fox said, “and we had a terrific turnout of our fans. There was a lot of energy in the building and I think that really showed in our defense. There was a lot to be pleased with, but also a lot to correct. Overall it was a great first game for us.”

Bryant scored the first bucket within the first minute following the opening tip, but was held scoreless for the next 5:04. In that stretch Georgia jumped out to a 11-2 advantage.

To close out the first half, Georgia established a 40-17 lead from a 15-2 run. Junior guard William Jackson II, who recorded a career-high 11 points on the game, pieced together eight points in the final four minutes of the frame with a pair of 3-pointers and a jumper.

Less than two minutes into the second half, Hammonds and Maten each drained 3-pointers to spark 10 unanswered Georgia points, securing the 50-17 advantage.

The Bulldogs continued the surge with a 12-2 run midway through the second half, featuring six points from Maten, back-to-back buckets from Hammonds and a jumper from freshman forward Nicolas Claxton. A free throw from senior forward Connor O’Neill and a layup from freshman forward Isaac Kante capped the 79-54 final.

Georgia continues its opening season home stand against USC Upstate Tuesday, Nov. 14. Tip is scheduled for 7 p.m. and will be aired on SEC Network+.

• Yante Maten opens the season with his 17th career double-double, which leads the SEC.

• Maten notched 21 point and 12 rebounds, while being a perfect 6-for-6 from the free-throw line.

• Rayshaun Hammonds poured in 17 points in his collegiate debut.

• William Jackson II chipped in a career-high 11 points, all in the first half. The guard was 3-for-3 from 3-point land.

• Hammonds is the first freshman to start a season opener since Kentavious Caldwell-Pope in 2011. Hammonds’ 17 points topped Caldwell-Pope’s 15 points.

• The glass was controlled by Georgia to a tone of 59-35. The home bulldogs grabbed 40 defensive rebounds and 19 offensive boards.

• The game marked the first all-time matchup between Georgia and Bryant. Georgia is now 6-1 in schools currently competing in the Northeast Conference.

• The 25 point differential was the most in Georgia’s season opener since the Bulldogs’ 42-point win over Jacksonville State in 2007.

On the Defense…
“When you play a team that’s smaller than you, you always have the advantage. We have a great defense and a lot of shot blockers. Yante [Maten] and Derek [Ogbeide] have always been good shot blockers, and Nicolas [Claxton] is going to be a good shot blocker, so we think that will be a real advantage for us on this team. I really think the way we flew around defensively was exactly what we needed to see, and I was very pleased with it.”

On the team as a whole..
“Everyone on our team had good moments but they also had teachable moments. We just want our team to be aggressive.”

On play of the freshman…
“I think they did really good, I think everyone showed that they can play, help and contribute in some type of way. I was very proud of everyone tonight how they listened to what the scouting report was, understood it, and did it to the best of their ability. We had some mistakes but that’s going to happen in the game of basketball.”

On getting his first playing experience…
“In practice I just work hard and see what my minutes are going to be. That’s all I worry about.”

On his shot…
“Repetition, just keep doing it everyday in practice and just shooting where I normally shoot. Just take the right shots and try not to force anything.”