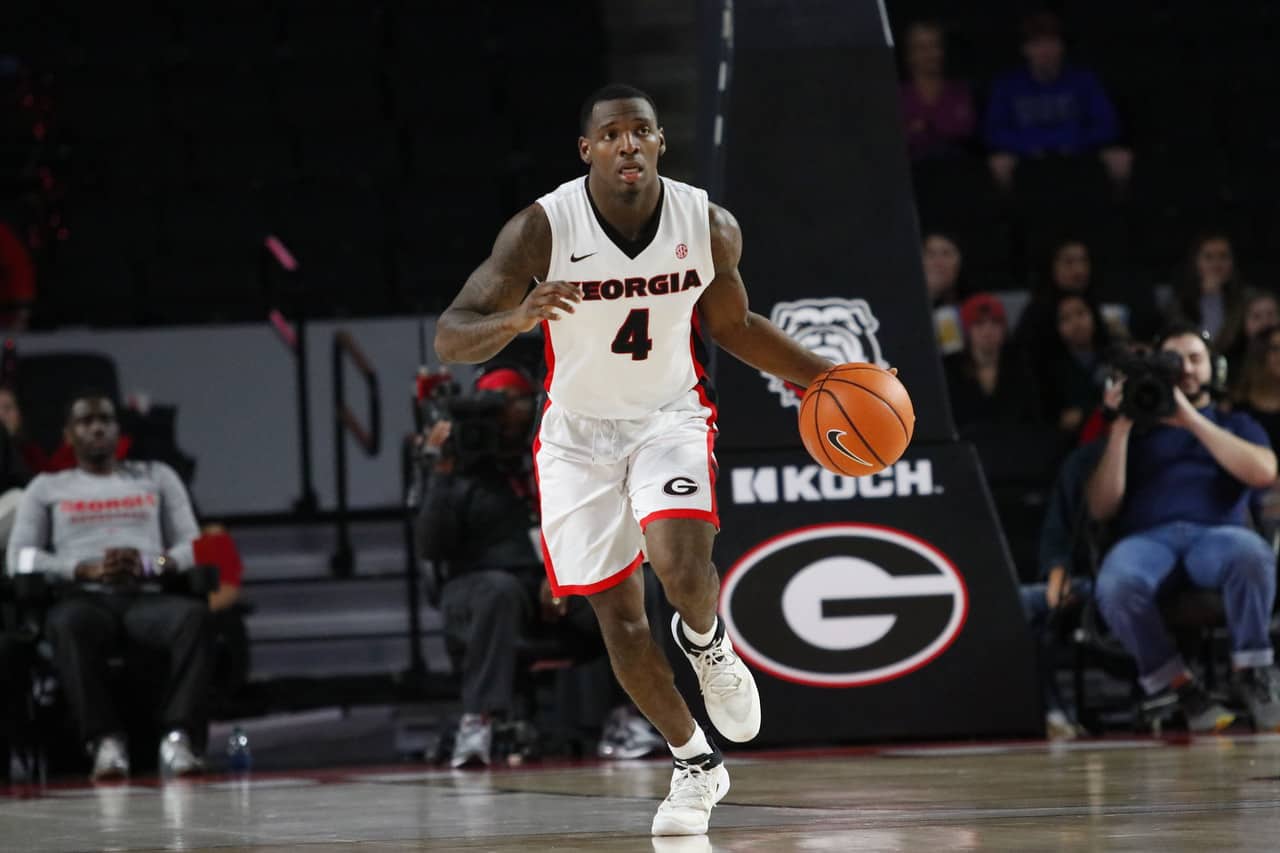 FULLERTON, Calif. – The Georgia Bulldogs men’s basketball team and the San Diego State Aztecs battled back-and-forth throughout, but the Aztecs outlasted 75-68, Friday night in the semifinals of the Wooden Legacy in the Titan Gym.

With less than four minutes remaining, Georgia (4-1) had a one-point advantage, however SDSU (5-1) made its next three shots and a pair of free throws to go up eight. In the same span, the Bulldogs shots went the other way and that was the difference. Senior Yante Maten and freshman Teshaun Hightower kept Georgia in it with two baskets, but Aztec guard Devin Watson responded with a highly-contested shot in the paint leaving 23 seconds on the clock and a six-point lead.

“It really was a hard fought game,” Georgia head coach Mark Fox said. “I thought that their experience down the stretch certainly allowed them to play better. We made a few critical errors in the final minutes. We are disappointed with the defeat, but complements to San Diego State.”

The Bulldogs stormed out of the gate with six unanswered points, while the Aztecs missed their first seven shots. Furthermore, SDSU only had two field goals in the first eight minutes as Georgia stretched its lead to the largest of the half at 16-4. The Aztecs fought back with two separate 7-0 runs bookending some back-and-forth scoring. San Diego State obtained its first lead, 28-27, at the 4:31 mark and led by as much as four points. Georgia finished the half rallying off seven straight free throws and only allowing one bucket to lead, 34-33. Maten had a game-high 12 points, while William Jackson II chipped in nine points.

The second half picked up right where the first frame left off in terms of competitive play. The largest early margin was four points by SDSU on a 6-0 run, but sophomore guard Tyree Crump nailed a three off a screen at the top of the key cut it to 45-44 at the 13:20 mark. A few moments later, redshirt senior Juwan Parker notched the game at 47-all with a trey of his own.

Claxton used his six-foot-11 wingspan to corral a critical offensive rebound and put up a second chance lay up at the 6:17 mark. Maten followed in the next possession to cap six scoreless, giving Georgia a two-point lead, 61-59.

The Aztecs captured the lead briefly before Jackson hit a 3-pointer to go back on top by one with under four minutes in regulation. The long ball marked the fourth time that Jackson has bested his career-best scoring mark this season. San Diego State recaptured the lead for the final time and didn’t relinquish it to seal the win.

The Bulldogs conclude the eight-team tournament Sunday against Saint Mary’s. Tip is scheduled for 11 a.m. ET and will air on ESPNU.