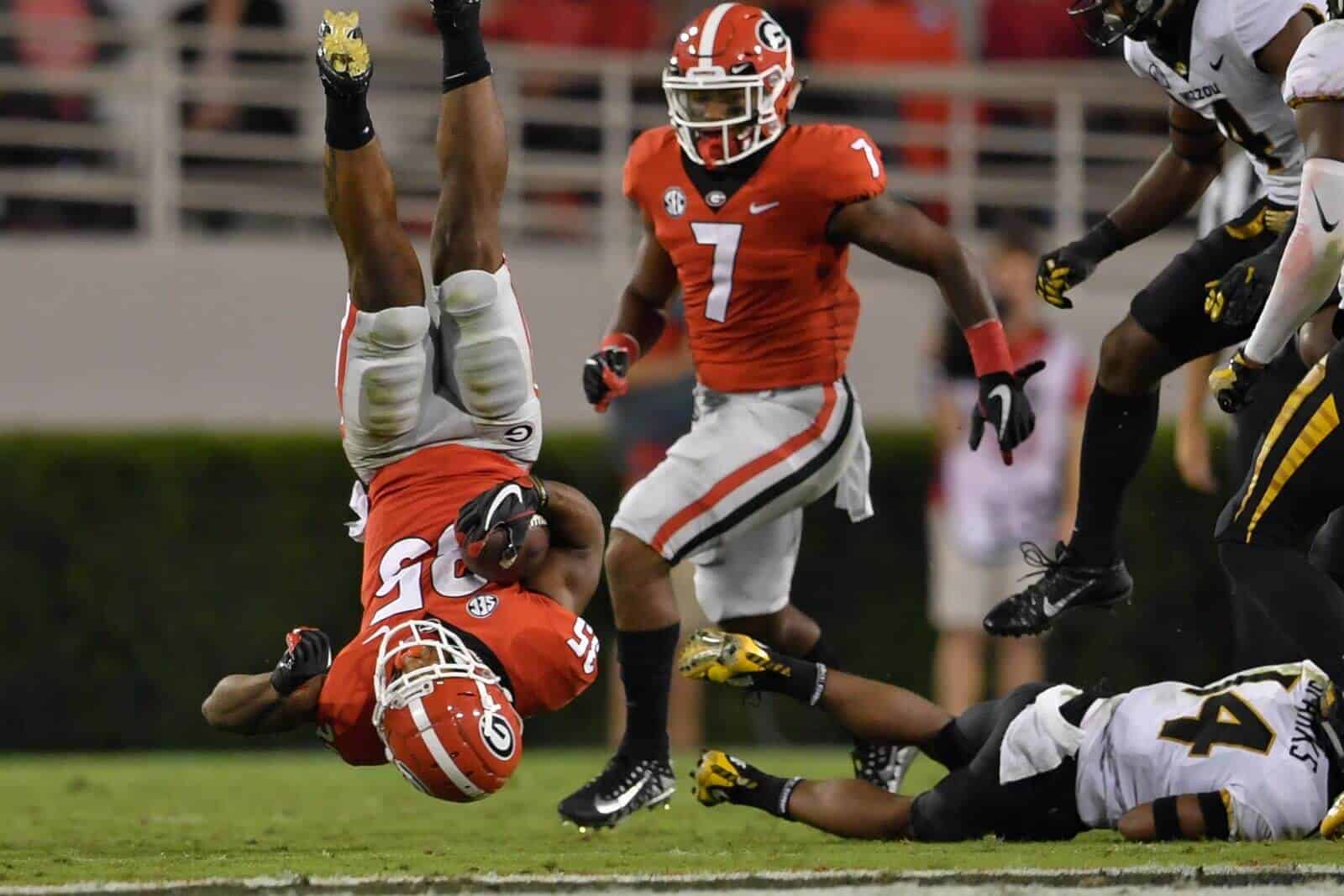 ATHENS, Ga. – A 696-yard explosion by the Georgia offense lifted the No. 4-ranked and undefeated Bulldogs past Missouri in front of a capacity crowd of 92,746 at Sanford Stadium on Saturday.

The 696 yards is the second-highest single game yardage total by a Georgia team in school history (record is 712 vs. Fla. Atlantic in 2012). The Bulldogs’ 7-0 record marks the team’s best start since 2005 as Georgia improves to 6-1 all-time against Missouri.

Freshman quarterback Jake Fromm finished with a career-high 326 yards through the air with two touchdowns passing and one on the ground. The Bulldog rookie hit 18-of-26 passes and led a balanced Georgia attack that included the four running back tandem of D’Andre Swift (94 yards), Sony Michel (86 yards), Nick Chubb (70 yards) and Elijah Holyfield (48 yards).

“The offense really saved us,” head coach Kirby Smart said. “They did a tremendous job converting third downs, making plays and answering the bell. We had two deflating plays defensively and the offense had the backs of the defense.”

Georgia struck first on its opening offensive possession. The Bulldogs marched 91 yards on seven plays, capped off by a Mecole Hardman 35-yard end-around that put the home team on the board first.

After a Missouri punt, the Tiger defense came up with a big play with Georgia backed up in its own territory. Cale Garrett picked off a Fromm pass at the Bulldogs’ 26-yard line to set the Tigers up at the 5. Missouri capitalized on a 4-yard pass play to knot the score at 7-7.

The back-and-forth pace continued on Georgia’s next drive. This time, Riley Ridley reeled in a 19-yard pass while he was falling out of bounds to put the Bulldogs back ahead 14-7. Missouri quarterback Drew Lock then connected on a 63-yard bomb with Emanuel Hall down the right sideline to again tie the score.

Michel had the answer for the Bulldogs on the next possession, racing 36-yards down field to give his team a 21-14 advantage early in the second quarter. Hall was not finished for the Tigers, however. The receiver used another 63-yard TD reception to tie it at 21-21.

Georgia scored the final 13 points of the first half thanks to two Rodrigo Blankenship field goals and a Fromm TD rush.

With a 34-21 lead, the Bulldogs’ scoring continued in the second half. Blankenship connected on two more field goals — one coming after Missouri muffed a punt to set Georgia up deep in Tiger territory. Michel put the Bulldogs up 47-21 in the third quarter with a 16-yard TD run.

Georgia added another late score and the Bulldogs held on to stay undefeated. The team now has a bye week and will take on Florida in Jacksonville on Oct. 28 at 3:30 p.m. ET on CBS.

*Bulldogs Enter Bye Week 7-0: With tonight’s 53-28 victory over Missouri, fourth-ranked Georgia improves to 7-0 overall and 4-0 in the SEC. This marks the Bulldogs best start since the 2005 season when they began the year 7-0. Georgia notches another win on Homecoming as it’s now 76-18-2 on this day. Georgia is 6-1 in the all-times series with UM. After a bye week, the Bulldogs face Florida in Jacksonville on Oct. 28 at 3:30 p.m. on CBS.

*Offensive Explosion: Georgia put up a season-high 53 points and 696 yards of total offense, and the yards was the second most in school history (record is 712 vs. Fla. Atlantic in 2012). Georgia tallied 31 points and 407 total yards on 45 plays in the opening half.  This already was more yards than the Bulldogs registered in their wins over App State, #24 Notre Dame, #17 Mississippi State and Tennessee. The 53 points was the most by the Bulldogs since a 55-9 win over Charleston Southern in 2014 and most in an SEC contest since a 63-31 win over Kentucky in 2014.

The Bulldogs were was 3-for-3 in the Red Zone in the first half and 6-for-6 in the game, staying a perfect 29-for-29 this season.  Directing the offense was freshman QB Jacob Fromm, who finished 18-for-26 for a career-high 326 yards with two touchdowns and a pick and added a 14 yards rushing, including a 4-yard scoring run. Fromm was 4-for-4 on the opening drive, including two passes on third down conversions, for 58 yards.  On the second scoring drive, Fromm went 4-for-6, including a 19-yard touchdown pass to sophomore WR Riley Ridley.  All 75 yards on that drive came in the air.  Fromm highlighted the Bulldogs’ fourth scoring drive with a 50-yard strike to sophomore TE Charlie Woerner.  This was a career long for Woerner.  Senior Javon Wims led the receiving attack with five catches for 95yards.

The Bulldogs also finished with 370 yards rushing. Freshman TB D’Andre Swift took off for a 71-yard rush in the third quarter to set up the Bulldogs’ fifth touchdown and he finished with a team-best 94 yards on six carries.  He had the longest run for a Georgia player since Nick Chubb went 83 yards for a touchdown versus #13 Alabama in 2015.  In addition, sophomore WR Mecole Hardman ran a reverse 35 yards for his first rushing touchdown to give Georgia a 7-0 edge at the 10:30 mark in the first period.  Hardman’s run highlighted a season-long 91-yard scoring drive that took 3:04 to open the game for Georgia.   He later hauled in a 59-yard touchdown catch to give the Bulldogs a 53-28 advantage. Chubb finished with 70 yards on 16 carries.

*Dog ‘D’: In the first half Missouri scored 21 points and tallied 200 yards of total offense on 24 plays. In the second half, they were limited to 7 points, getting only 112 yards on 25 plays. Missouri gained just 45 yards on its first 13 plays of the game.  However, the Tigers’ 14th play went 63 yards for their second touchdown.  Then, Mizzou connected on a 64-yard touchdown.  For the game, the Tigers finished with 312 yards and only 59 of that came on the ground.  Mizzou’s 28 points is the most against the Bulldogs this year.  Notre Dame’s 19 points in the Irish’s loss was the previous high against the defense in 2017. Junior ILB Roquan Smith was Georgia’s leading tackler with eight stops.

*Blankenship Goes For A Career High: Redshirt sophomore PK Rodrigo Blankenship drilled all four of his field goals, tying his career high, and connected on five PATs to score a career-high 17 points, which ranks second in school history for a single game.  Blankenship hit field goals of 37, 43, 29 and 27 yards on the day.  He came into the game 6-for-7 on the year.

*Sanders Sets INT Return Record: Senior S Dominick Sanders snagged the 14th interception of his career in the second quarter and returned it 18 yards.  Sanders now holds the school record for career INT return yardage with 329, passing Jake Scott who had 315 on a school record 16 picks.  Sanders is tied on the NCAA active career list with his 14 picks.

*Starters: Freshman ILB Monty Rice earned the start for the first time in his career.  He is the 13th new Bulldog starter this year and the fourth true freshman.

*Turnovers: Georgia is +1 in Turnover Margin this season and was even on the night.  Opponents have forced nine turnovers and turned them into 31 points while the Bulldogs have forced 10 turnovers and registered 34 points. Fromm threw his third interception of the season deep in Bulldog territory and Mizzou returned it to the 5-yard line.  The Tigers scored a touchdown two plays later.  Dominick Sanders recorded the second INT of the year (14th of his career) and returned it 18 yards in the second quarter.  Jake Fromm scampered in from 4 yards out to put Georgia up 31-21 on the next drive.