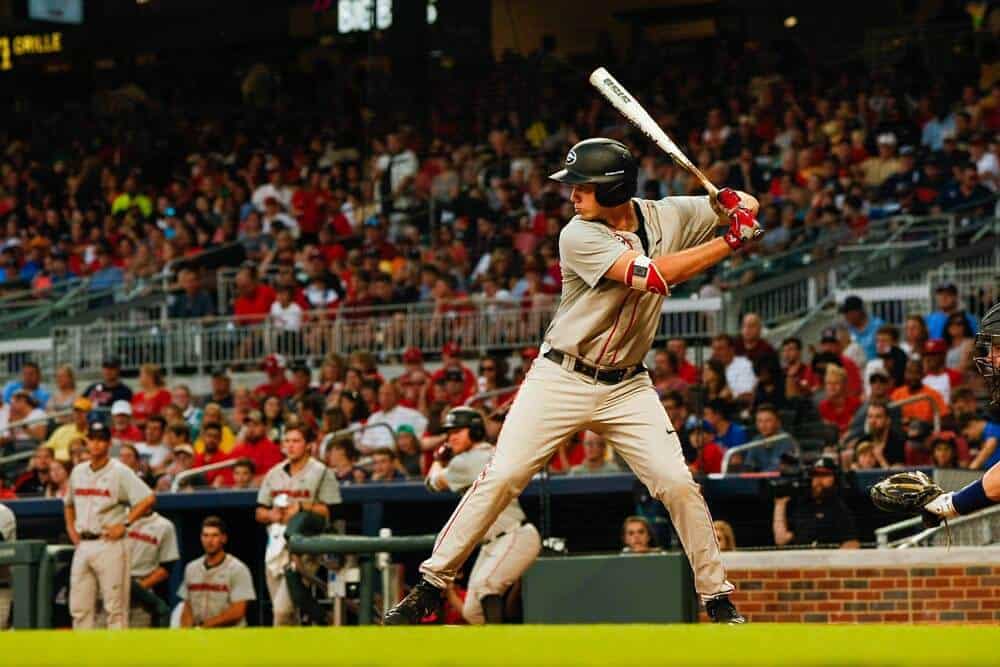 ATLANTA, Ga. – Georgia defeated Georgia Tech 8-7 Tuesday to complete a season sweep in front of a crowd of 23,737 at SunTrust Park in the 15th annual Spring Baseball Classic For Kids.

It marked the first sweep of Tech in a season series of at least three games since 1984 as Tuesday’s winning run scored from first on a two-out single by Keegan McGovern in the ninth thanks to aggressive base running by junior Mitchell Webb.

In the fifth, freshman right-hander Zac Kristofak came in and Tech jumped ahead 4-3, rallying for four runs that all started with a two-out walk to the No. 9 hitter Kyle McCann. After loading the bases, Ryan Peurifoy lined a ball to left field that McGovern dove for but it bounced past him for a three-run double. Kel Johnson followed with an RBI-double. Georgia looked to junior Drew Moody, and he got the final out of the frame. Georgia responded by reclaiming a 5-4 lead with a pair of runs in the sixth highlighted by a two-out RBI bunt single by Biggar. In the seventh, McGovern smashed a two-out, two-run double to make it 7-4. Tech answered with a couple of two-out runs in their half of the inning to close the gap to 7-6. McCann reached with a leadoff walk in the eighth that ended Ryan Avidano’s outing and freshman Tim Elliott came in and after retiring Wade Bailey on a sacrifice bunt, Trevor Crayport tied the game with an RBI-single.

With two outs in the ninth, Webb reached on a walk. McGovern laced a single to center and Webb never stopped running, sliding home to beat the throw and put the Bulldogs in front 8-7. It marked McGovern’s third hit and RBI of the night

Georgia freshman Tim Elliott (1-0) earned the win in relief while Micah Carpenter (0-2) got the loss. With two on and one out in the ninth, Elliott was lifted in favor of sophomore right-hander Blakely Brown. He came in and got the second out before Georgia turned to freshman left-hander Justin Glover (0-2, 0 SV) to face McCann, and he got him to bounce out to first for his first career save. Tech dropped to 24-22.

In the first inning, Tech put runners at the corners with one out, and the Bulldogs turned their 35th double play of the season to end the threat. Tech put two on with one out in the second, and Georgia notched another double play.Georgia freshman right-hander Tony Locey started and provided four scoreless innings with four strikeouts but did not factor in the decision.

Georgia returns to league action Friday when it begins a three-game series against SEC co-leader and sixth-ranked Miss. State (32-17, 16-8 SEC) at Foley Field. First pitch will be at 7:02 p.m. and be available on SECN+ and the Bulldog Sports Network from IMG.

Dawg Tracks:
*Junior Keegan McGovern went 3-for-5 with three RBI including a two-out, RBI-single in the ninth.
*Freshman Tucker Bradley extended his hitting streak to a career high nine games with an RBI-single in the fifth. He finished 2-for-4 with 2 RBI.
*Freshman Tony Locey pitched four scoreless innings with four strikeouts in his first start since March 25 with six relief appearances during that stretch.
*Freshman Austin Biggar put down two sacrifice bunts which matched his season total and then a two-out RBI bunt single made it 5-4 in the sixth.
*Tonight marked the first meeting between the clubs at SunTrust Park in the 15th annual Spring Baseball Classic to benefit Children’s Healthcare of Atlanta. The previous 14 meetings came at Turner Field, the former home of the Atlanta Braves and Georgia was 9-5 in those games.

Player Perspective: Keegan McGovern
“I was rounding first (in the ninth) and I saw Mitchell (Webb) rounding third, and I was thinking, ‘Go Mitch Go, and then he slid home. Our season hasn’t gone as we would’ve liked but winning three games against Tech is a great accomplishment. We hope to take this momentum in to the last two weeks.”

Coach’s Corner: Ike Cousins Head Baseball Coach Scott Stricklin
“The way we’ve won our last three games proves we can get it done when it’s all on the line, and our team is growing up and that’s a good sign. They are finding a way to get it done. Coach (Scott) Daeley deserves an extra Powerade tonight for sending Mitchell (Webb) a couple of times. He noticed they were a little slow getting the ball back in from the outfield, and we were able to score a couple of runs that way including the one in the ninth. I told everybody before the game, that a lot of people were going to pitch for us tonight and to be ready, and they were. We’re playing some good baseball right now. It’s good to see Keegan get it going tonight and Austin (Biggar) the way he bunted. He’s not our best bunter, and I get on him about it in practice but I’m not going to be able to do that after seeing him execute tonight in the game.”