Spring practice No. 11 in the books for Bulldogs

Spring practice No. 11 in the books for Bulldogs 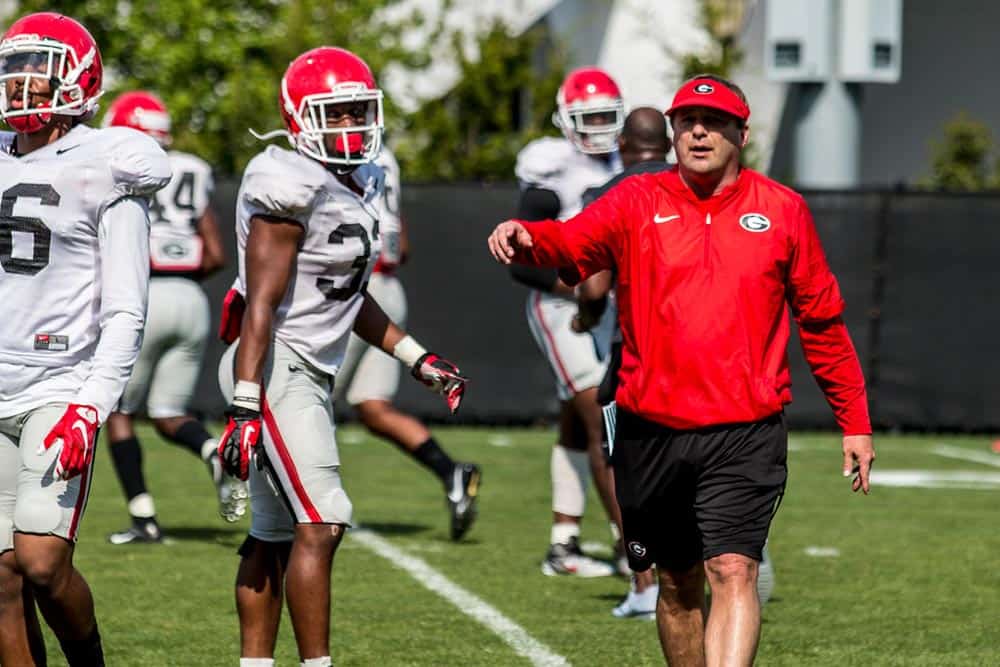 ATHENS — The Georgia Bulldogs worked out for just over two hours on the Woodruff Practice Fields here Thursday afternoon.  It was the 11th of 15 practices during the spring period as they work towards the annual G-Day intrasquad game on Saturday, April 22.

‘’Today was a much better day defensively.  I thought the defense came back with their necks bowed up and spurs ready.  I think they were a little upset and they practiced a lot better today.  Hopefully, the offense will respond Saturday, but it’s the first life the defense has shown — probably the best practice we’ve had defensively — since we came out of shorts.  In shorts, everybody ties, but since we’ve put the pads on, the defense has struggled a little bit.  They made a lot more plays today.  I thought the energy was really good out there for the defense, a lot of enthusiasm.  Not so much for the offense, but that’s kinda how this spring has gone.  One side or the other has done a little bit better.

‘’Our plan is to hit people, strike people, tackle people, practice good football.  The plan is to go out there and have kids get better.  I’m not looking for one side or the other to win.  I’m looking for both sides to compete and do really good.  I like it when both sides compete.  We get into some really good competitions in special teams, but we’ve had days where we’ve been up and down.

On practicing situational football:  ‘’Basically, every day we start our team meeting with another situation.  We have the entire team in here.  We go through a situation.  One of them might be two minutes, and the offense has to get a first down to win the game.  We had that situation come up against Tennessee.  We weren’t able to do it.  Then we had to stop them because we had a sack/fumble.  So we did stop ‘em.  We got the ball back.  We did score.  So what we’ve tried to do is replay the situation.  I’ve spent a lot of time during this offseason talking to NFL teams, because these NFL teams deal with this every game.  Every game comes down to that.  College football, I think, 50 percent of our games come down to one score.  So if that’s the case, we’ve got to simulate those.  So every single day, except the first practice, we had end-of-game situation at practice.  I think it makes Jacob (Eason) a lot better.  It makes Jake Fromm a lot better.  And defensively, it’s been great.  We even had a situation the other day where we were gonna clock the ball with the clock running.  We had a first down and we went to spike the ball and the guy jumped offsides.  At the end of game, we had a 10-second runoff.  So we start the whole meeting with that, and I think that kids can learn a lot from these situations.  I mean, Jay Johnson’s a guy from Minnesota and he brought a list of situations they did there.  That’s so invaluable to me because you try to simulate those.  You talk to other coaches and try to simulate them, so we’ve done a lot of that this spring.’’

On progress of special teams this spring:  ‘’That’s the hardest part to judge because we do offense/defense live and we tackle and scrimmage.  You don’t really do special teams because the collisions are live.  We do as close to live as we can and we’ve focused of them a lot.  Rodrigo (Blankenship) has done a good job, a much better job, with kickoffs.  Cam (Nizialek) has punted some nice balls.  He’s been a little up and down, but he’s punted some nice balls.  So it’s hard to say where we are from that perspective. I am comfortable with the work we’ve gotten done.  Our kids really challenge each other in those drills, special teams-wise.  We had Sony Michel going against Lorenzo Carter in a punt/punt return drill and they’re life-or-death competing out there.  I love that.  I mean, I love that.  But it’s really hard to measure because we don’t have live situations.’’

How much will Cam Nizialek push Marshall Long at punter?  ‘’I expect a lot.  It’s hard to say because Marshall’s not kicking yet.  He’s coming back.  He’s slowly getting his motion back, but he’s not 100 percent comfortable yet.  And Cam’s punting all these balls right now. So I expect it to be a really good battle in the fall.  Cam’s had good averages in the spring, hang time and average, so that’s good.’’

How has the defense’s performance this spring been addressed?  ‘’We addressed it.  As leader of the organization, we addressed it.  We didn’t have a very good scrimmage.  We were very honest.  They did some good things in the scrimmage.  It wasn’t all bad.  We showed the good, we showed the bad, and then we go into a defensive meeting and we explained what we did statistically, which wasn’t very good.  And then Coach (Mel) Tucker talked to them about it and some of the players talked about it.  I can’t say that it was a lot better Tuesday, but it was a lot better today.’’

More “buy-in” from players in a coach’s second year?  ‘’It’s more common to have more buy in the second year because you’re a second year into a relationship with somebody.  So the longer you know people, obviously the better relationship with somebody is. So for every kid on this team, it’s at least the second year, some of them first, for the ones that got here mid-year.  But that’s the biggest reason.  You know ‘em better.  You know how to push their buttons better.’’

On value of the slot receiver in the Georgia offense:  ‘’I think first evidence is to look at last year.  Where was our leading receiver (McKenzie)?  There was a lot of production in that position.  So that’s a big challenge for us.  I tell you, man, when you look at practice, Terry Godwin is like night and day to me to watch that kid.  I was very honest last year about Terry playing tougher, playing bigger.  The guy has blocked hard, he’s competed, he’s taking more reps, he’s such a better leader.  I mean, to see him grown up means the world to me because I’ve seen that kid since his ninth grade year.  He’s a vital piece to that slot.  He and Jacob have great intuitive instincts.  They have a great intuition of where each other is going to be.’’

On proposed legislation against hiring coaches associated with prospects:  ‘’I have a hard time with that, as a son of a high school coach and a guy who has seen tons of high school coaches go on to greater success.  Kevin Sherrer, Hugh Freeze, Gus Malzahn, Jeremy Pruitt.  The names go on and on.  A lot of the best coaches I’ve ever been around have been high school coaches.  We get ideas from them.  I know a lot of you guys think those guys don’t know what they’re talking about. They face more of the offenses that we face, so they have to find ways to stop them and create plays.  So, so many guys that I respect are now being cut out of it.  Now, they’ll argue that they’re not being cut out of it, only the ones that have prospects.  But is that fair to cut out a guy, because he has a prospect, from an opportunity to develop his career and move on.  I think it’s cutting the lifeline out of our program base.  I mean, where do we get our lifeline from?  Are we gonna have to go to the NFL now and get coaches?  Where do you develop coaches from?  They develop from high school up.  So that doesn’t fire me up.  I certainly don’t like hiring a guy to get player, either.  So it’s a fine line.’’