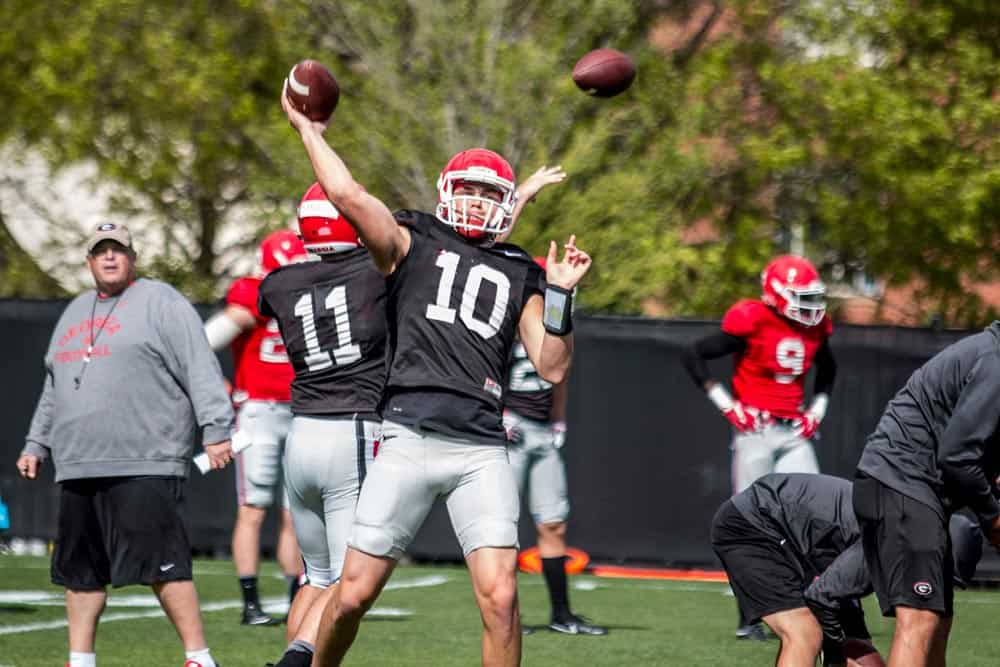 ATHENS, GA. – The Georgia Bulldogs staged their first scrimmage of the spring practice period with a two-hour workout at Sanford Stadium on Saturday afternoon.

‘’Overall, I thought the scrimmage was well-organized.  We had good rhythm.  As far as the reps we got, I think we ended up with around 60 reps with the Ones, around 60 reps with the Twos and then about 20 or so with the Threes, so right around 130, 140 or so snaps, which is where we try to be.  I don’t think we had any significant injuries.  I do know that Solomon Kindley went down with a sprained ankle.  I don’t know the severity of it yet; I haven’t talked to Ron (Courson), but he’s got an ankle injury.  We’ll see and get him checked out.  Dom Sanders twisted his knee a little bit.  I think he had a slight MCL.  Probably could have gone if had to, but he ended up getting about halfway through the scrimmage.  So, those two guys we’ll have to check on.  Those things happen when you go full-speed live.  Jayson Stanley was still not cleared to go completely. He practiced with a black shirt on, which you guys probably saw.  Mecole (Hardman) played exclusively on offense for this scrimmage.

‘’As far as the results of the scrimmage, I think it’s really hard anytime you talk about a scrimmage.  There’s some good things we did and some really poor things we did.  When that happens, you tend to put a lot of emphasis on what you did well, and then you tend to be real negative about what you didn’t do well.  We didn’t tackle well as a defense.  So, does that mean that we’ve got really good skill guys that are hard to tackle?  There’s probably something to do with it, but we’ve got to improve our tackling.  Didn’t seem to have many turnovers.  I think we had one fumble and one, maybe two interceptions thrown.  If you have 130 or 140 snaps and there are three turnovers, it’s never acceptable, but it’s not out of hand.  Probably the most disappointing thing today was what I call the defense’s ‘knock-back tackle.’  When you hit a guy, splatter him and knock him back where he doesn’t get yards after contact.  We didn’t have a lot of that today.  We still have to improve a lot defensively.  I don’t hide behind the fact that we’re not where we need to be.  I do think that offensively, Jacob (Eason) and Jake (Fromm) are more comfortable throwing the ball.  I know Jacob is in a better spot right now than he was in this time last year.  But we’ve got to continue to grow him as a passer.  He’s got to develop in protections, and we’ve got to get some wideouts that can win the one-on-ones that can help him.  Special teams:  nothing glaring.  We didn’t do those live, but we did all situations.  Rodrigo (Blankenship) did a good job kicking field goals, and Cam (Nizialek) punted well.  All but one punt was over 40 yards, so that was good for us.’’

On the offensive line’s physical play today:  ‘’I think I’ll need to wait until I see the film.  The tough thing out there was that we had a couple of explosive runs, and by that I mean runs over 15 yards.  So we have those and a lot of times you’re thinking, ‘wow, they’re really doing well.’  But today there were a LOT of 4- and 5-yard runs, which really bothers me as a head coach.  It concerns me that we’re not able to stop the run at times when we’ve got a loaded box.  So I’ll reserve judgment on that until Monday, after I get to see the tape tomorrow and then meet with the players Monday.  I know statistically, we ran the ball well, but I can’t really say that they dominated up front.  Now we did, for the first time, do Ones on Twos, Twos on Ones, for some parts of the scrimmage, so you had some matchups out there that had not happened in practice up until that point.

How much is a year’s experience helping Jacob Eason with his receivers?  ‘’Well, three of those guys are gone:  Kenneth Towns, Reggie (Davis) and Isaiah McKenzie are not out there.  Most of the guys he’s got out there now, with the exception of J.J. Holloman, he’s worked with before.  I don’t know if it’s the factor of working with them, as much as it is working, period.  He is much more experienced.  He understands when the call comes in, ‘I’m looking for this, this and this.’  Where it used to be, ‘What is this call and what do I do?’  So, he’s come a long way.  He’s more confident in the pocket, more confident in the protections.  His decision making is better and his accuracy has been better.  But he’s getting challenged because the other guy (Fromm) did well, too.  Fromm did well, and Sam Vaughn came in and did a really nice job with the Threes, as well.’’

Any individual standouts in today’s scrimmage?  ‘’It’s hard to say from a scrimmage, but offensively, I’d say Brian Herrien was a guy that we were gonna get the ball to and find out what he could do in scrimmage situations and he did pretty well.  He ran the ball really hard, had a couple of long, explosive runs.  He’s a tough, competitive guy, but if I had to say that somebody stood out, I’d say that he did.  Defensively, J.R. Reed had quite a few tackles.  Of course, that’s not a good sign when your safety is leading your team in tackles because the ball’s getting back there too much.’’

Assessment of receiver play today:  ‘’We’ve got to do a lot better at receiver, in general, from a standpoint of depth and guys that can execute and go make plays.  I do think, when it comes to our wideout group, we’ve got a by-committee group, and Terry (Godwin) is really doing a good job of being a leader and challenging those guys, a lot more so than he did at this time last year.  He’s coming into his own when it comes to work ethic.  But just talent-wise, at that position, we’ve got to get more guys that can help us be more successful.  I’ll say this about them.  They’re playing more physical than they ever have since we’ve been here.  J.J. Holloman, Tyler Simmons, even Terry.  We had a bubble screen when he went out there, blocked and was physical.  On that part they’ve answered the bell.  We’ve just got to get them open and get them separated more.’’

Could J.R. Reed have a role on this team?  ‘’Absolutely he could have a role.  Right now, he’s flashing speed, athleticism, toughness, and I’m tough on him.  I’m out there every day, challenging this guy because I think he could be a really good player.  He’s fast, he’s physical, he’s smart, but he hasn’t played in that many games in this system.  If you take Dom (Sanders) and A.D.’s (Aaron Davis’s) cumulative years in the system, there’s no much there.  But this kid is striking people, he’s running hard and playing hard.  We saw some of that last year, but it’s hard on scout team because you’re not allowed all the time to knock ‘em out and hit ‘em.  But he made a few flashes today in plays where he could crack the starting lineup if continues doing what he’s doing.’’