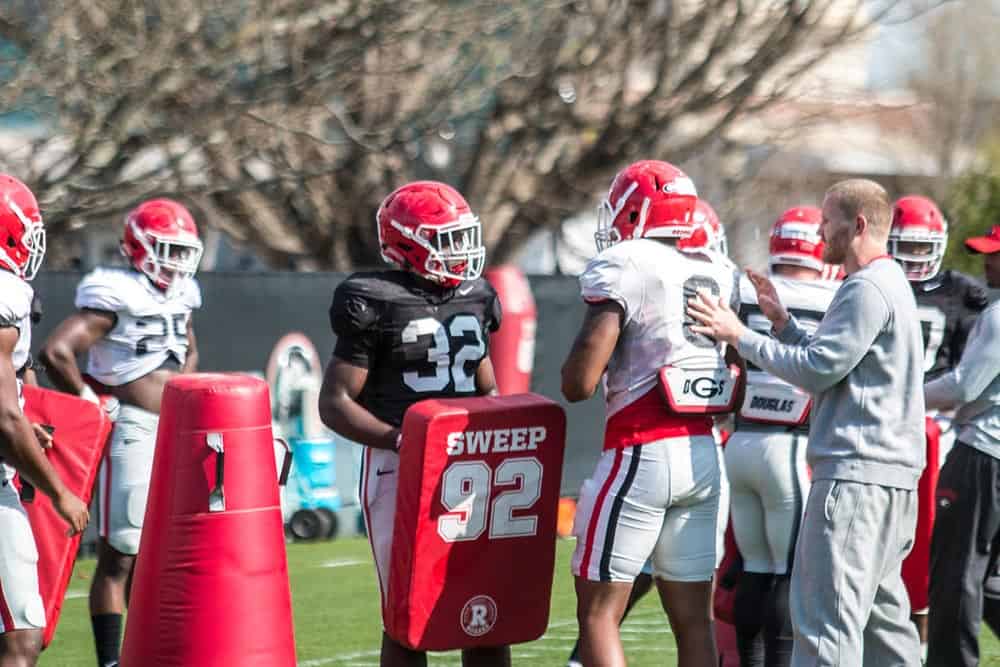 ATHENS, Ga. – The Bulldog football team conducted its fourth practice of the spring on Tuesday afternoon at the Woodruff Practice Fields.

With temperatures hovering near 80 degrees at the beginning, Georgia practiced for two and a half hours and now has 11 more practices this spring.  The spring finale will be the annual G-Day intrasquad game on Saturday, April 22.

“I feel like some guys out there are complacent,” Smart said.  “Some think they have started two years and they are just comfortable in the spot where they are.  There’s not a sense of urgency.  Until these guys prove what some are saying about them, I won’t be happy.

Smart also mentioned that senior receiver Shakenneth Williams is dealing with an injury and is currently acting as a “student coach” while sophomore receiver Riley Ridley is working through an ankle injury and the coaches are hopeful that he will be back by the end of the spring.

The fifth practice of the spring, which arrives on Thursday, starts the three-day UGA Coaches Clinic hosted by Smart and his staff.  The clinic will run on Thursday, Friday and Saturday and will feature coaches from the NFL as well as staff from the collegiate and high school levels.

“We are really looking forward to Thursday and our Coaches Clinic,” said Smart.  “We are expecting a great showing of coaches from all over and we are excited to have them in Athens for three days.”

Georgia was joined at practice by an estimated 200 law enforcement from Clarke County and surrounding counties as an appreciation for their daily services.

UGA will use G-Day to implement the SEC’s Clear Bag Policy, which will go into effect at all SEC venues beginning this fall.  The policy will also be in effect, beginning in the 2017-18 competition year, at all of UGA’s ticketed sports venues: Sanford Stadium, Stegeman Coliseum (men and women’s basketball, gymnastics) and Foley Field (baseball).  More information on the SEC Clear Bag Policy can be found at: http://georgiadogs.com/clear-bag-policy.