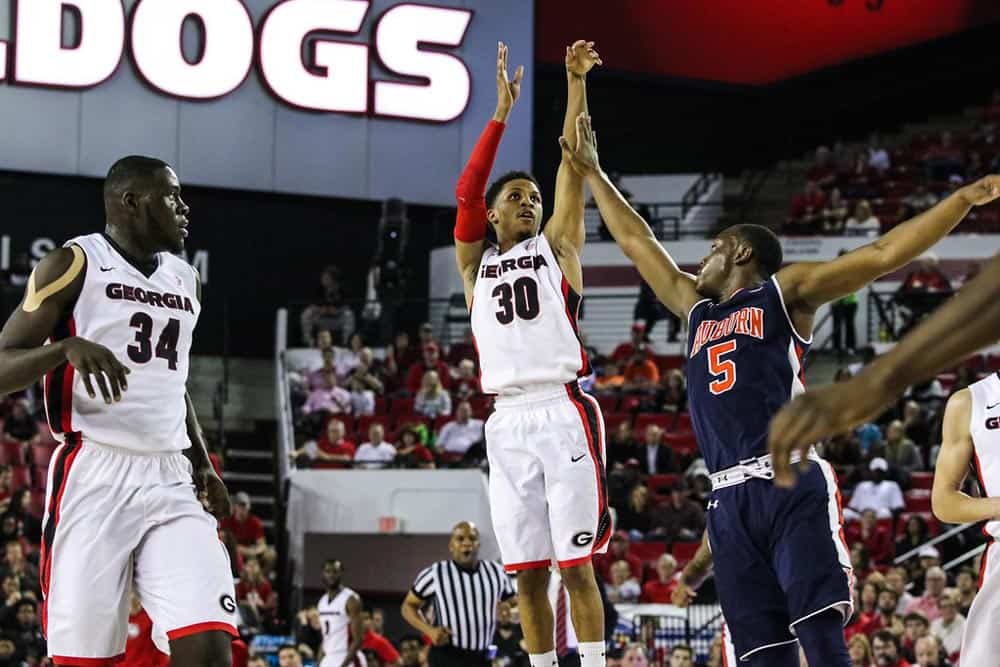 ATHENS, Ga. – Another stellar performance from J.J. Frazier helped the Georgia Bulldogs defeat Auburn, 79-78, after trailing by as many as 16 points on senior night at Stegeman Coliseum.

Frazier scored 31 points in the win â€“ his fourth-straight game with at least 28 points â€“ to help the Bulldogs fight back and go ahead 79-73 with 1:13 remaining. The Tigers responded with a 5-0 run to cut Georgia’s advantage to just one, and stole the ball with 14 seconds left with a shot to take the lead. However, they missed a three-pointer out of a timeout, Juwan Parker grabbed the rebound and Georgia secured the one-point victory.

“We only turned the ball over two times in the second half,” said Georgia head coach Mark Fox. “We make 10 3-point baskets and we shoot 90-percent from the line, only missing one. We did some fundamental things to give ourselves the win and in the second half we rebounded the ball much better.”

Frazier, who also led Georgia (18-12, 9-8 SEC) with five assists, became the first SEC player to record at least 30 points, 5 assists and 5 rebounds in a game since at least 2010-11. He was honored along with fellow seniors Kenny Paul Geno, Houston Kessler and Brandon Young prior to the game, the final home contest on the Bulldogs’ schedule, and helped Georgia earn the season sweep over the Tigers (17-13, 6-11).

“J.J. refuses to let us lose,” Fox added. “He is a phenomenal competitor. J.J. is a great leader in battle. I can’t say enough things about him and he carried us to victory again tonight. I’m glad we had some people come tonight to appreciate him because he has just been an outstanding player for us.”

The Bulldogs got off to a slow start in the first half, allowing Auburn to score 20 points in the game’s first 10 minutes, and found themselves down by as many as 16. A 12-0 run by Georgia spanning 3:54 seconds cut the Auburn lead to 28-24 with under four minutes to go in the half. Frazier was held scoreless for the game’s first 11 minutes but had 10 points by halftime to help lead the effort to come back. Eight of Georgia’s 30 points in the opening period came after offensive rebounds, with Ogbeide responsible for five of those and eight total rebounds entering halftime. He finished the game with a career-high 15 rebounds and also scored 10 points.

Auburn took a seven point lead into the break, but Frazier opened the second half with one of his season-high five three-pointers on the first possession. The Tigers responded and hit one of their own on the other end, and then Georgia went on a 7-0 run to tie the game at 40. After a back-and-forth four minutes, Frazier hit another three to knot it again, and sunk a pair of free throws on the next possession to give Georgia its first lead of the game. Once the Bulldogs took the 54-52 lead with 12:43 remaining, they held it for more than seven minutes, until the game was tied again at 71-71. Tyree Crump scored eight points in the second half.

The Tigers took a 73-71 lead after a T.J. Dunans layup with 3:50 to go in the game. Georgia went on an 8-0 run from that point to go ahead by six, but Auburn responded with a three-pointer that cut the lead in half. After Frazier missed a shot on the next possession, Danjel Purifoy was fouled going up for a rebound and made both free throws on the other end to cut Georgia’s advantage to just one with 37 seconds left. Auburn stole the ball on the ensuing Georgia possession and called a timeout with 7.5 seconds on the clock. After the timeout the Tigers missed a three-pointer and Georgia escaped with the victory.

Following his recent tear, Frazier is just the second player from a Power Five conference to score 120 points over a stretch of four games. He will look to continue the hot streak when Georgia travels to Arkansas Saturday to take on the Razorbacks. The game is set for 2:00 p.m. ET and will be televised by ESPN2.

• With 31 points in the game, Frazier surpassed Shandon Anderson for seventh on the all-time scoring list at Georgia (entered tonight needing five points). He now trails No. 6 Bob Lienhard by 116 points.

• Trailing by as many as 16 points in the first half, Georgia rallied to draw back within seven points at intermission. The Bulldog run included a 12-0 run over just 2:21 that cut the deficit from 28-12 to 28-21.

• With his 31-point effort tonight, Frazier accounted for 124 points over the last four games. He is one of now nine players nationally to reach that mark in a four-game span and one of just two Power Five conference players (Markelle Fultz, Washington) to hit that total. He’s the first SEC player to get 30 points, five boards and five assists in a game dating back prior to the 2010-11 season.

• Derek Ogbeide pulled in a career-best 15 rebounds in the contest to lead all players while posting his third-career double-double.

• Georgia wraps its home slate with a 12-5 record, giving Georgia a home win percentage above .667 in every year but one under Mark Fox.

On the game…
“We didn’t start the game well. Obviously with Senior Day and the emotion, we were a mess and give Auburn credit, they came to play. Once we started getting back to our competitive selves, we did some important things. We only turned the ball over two times in the second half. We make 10 3-point baskets and we shoot 90-percent from the line, only missing one. We did some fundamental things to give ourselves the win and in the second half we rebounded the ball much better. Every key area we need to check a lot of boxes off. Auburn had a very offensive team but we really had to scrap to win it and I feel really good for our team.”

On game planning…
“We are just so disjointed as we try to reinvent our team each game because the plan we had against Alabama would not of worked tonight. So until we get Yante (Maten) back and we become whole again, we will have to be a little bit different each game. And one of the things that we talked about was everybody rebounding. The guards even in the timeouts were talking about just boxing them out and we’ll chase them down. We had a lot of guys chip in in that area”

On J.J. Frazier…
“He refuses to let us lose. He is a phenomenal competitor. J.J. is a great leader in battle. I can’t say enough things about him and he carried us to victory again tonight. I’m glad we had some people come tonight to appreciate him because he has just been an outstanding player for us.”

On finishing his last home game…
“I love this school, man. Words can’t describe how much this means to me, and how much of my heart and soul I put into this university.”

On the close finish…
“Six points in two minutes is just two possessions, and the way they shoot the basketball, they are never out of the game. For us is was a more so about getting stops, it wasn’t about the lead.”

On sending the seniors out with a win…
“It feels amazing, this is what we wanted, this is what we talked about. We had to take care of business, we knew it was going to be a hard game, but we took care of what we had to.”

On overall performance…
“It was a terrific basketball game. Frazier is terrific. We probably could have done a better job getting it out of his hands a little bit more but he made some tough shots. Georgia did a good job of getting our bigs into off-screen situations where we are challenged. To be down 6 with a minute or so with a chance to win it at the end is pretty good for a pretty young team. I give Georgia credit and I think Mark (Fox) is one of the best coaches in the country. I’ve told him that before and I believe it to be true. You all are very fortunate to have him here at Georgia. He gets the most out of what he has. I think you can see from our standpoint that we have a very bright future. When you start four freshman and a sophomore like we do, and we have a good group coming in next year….We are not done yet either. This league is very competitive. The teams at the bottom of our league can beat the teams at the top.”