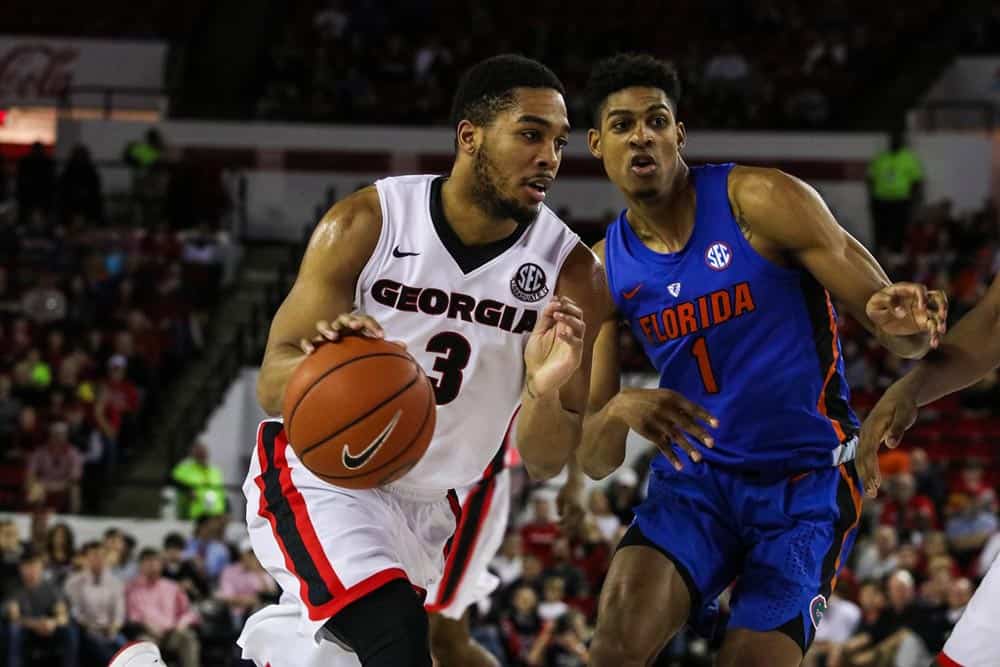 Senior J.J. Frazier made a free throw with 7:42 left in regulation to slim the Gators’ lead to five points at 54-49 but that was the closest the Bulldogs got. Florida expanded its lead to secure the win down the stretch.

“We’re not playing well and that really rests totally with me,” Georgia head coach Mark Fox said. “We’re not playing well on offense. We started the game poorly, we battled back in it, and then in the second half, we didn’t finish any plays, and we turned the basketball over. Turnovers have been an issue with this team and I have not solved it. Give Florida credit, they’re a good defensive team, but we have to have more than two guys show up and finish plays. Tonight, we didn’t do that.”

Florida entered halftime with a two-point lead at 35-33 after at one point owning a 16-point advantage. At the 8:36 mark, the Bulldogs rallied off 15 unanswered points to cut their deficit from 16 points to one point. In that span that lasted a little more than five minutes, Florida went 0-for-10 in field goals. Maten led all scorers with 10 points in the first half.

The Gators went on a 7-0 run starting at the 15:40 mark in the second half to extend their lead to 10 points at 48-38. The two teams continued to exchange baskets until Georgia managed to cut the deficit to five points on a 5-0 run. Maten got a tip-in followed by a pair of free throws from Juwan Parker and a single free throw by Frazier. However, the Gators quickly upped their advantage back to 10 points with a 3-pointer and a layup with 6:45 left to play in the contest. The Bulldogs were unable to pull the game within single digits the rest of the way.

The rebound battle favored Georgia 45-39, but the Bulldogs shot 33-percent from the floor compared to the Gators’ 41-percent clip.

The Bulldogs travel to Knoxville, Tenn. for their next outing against Tennessee Saturday. The tip is slotted for 4 p.m. and will be featured on ESPNU.

• Georgia used a 15-0 run from over a span of 4:52 in the first half to trim a 30-14 deficit to just a one-point gap. Florida was held scoreless for a total of 5:03 while Georgia was able to cut into the cushion. After a Florida free throw gave the Gators a two-point lead, Yante Maten nailed a jumper to draw even at 31.

• The Bulldogs were the first team to outshoot the Gators in the first half (40.6-37.1 percent) since Georgia accomplished the same feat at Florida on Jan. 14. Ole Miss and Tennessee also got the better of Florida in first half shooting on Jan. 3 and Jan. 7, respectively, the only other SEC teams to do so.

• Georgia lost the turnover battle 16-8 in the game, and the Gators outscored the Bulldogs off turnovers by an 18-6 tally.

• Derek Ogbeide finished with 10 rebounds in the contest, his third-consecutive game with double-digit rebounds.

• J.J. Frazier’s 18 points give him his fourth-consecutive double-digit scoring game.

On the 15-0 run in the first half…
“Our defense was good. We had a stretch there where we guarded, and we had shutouts and it led to fast breaks, so we capitalized. We just aren’t consistent enough at that end right now.”

On second-half turnaround….
“It wasn’t anything special that I said or our staff said. We challenged them, of course, to turn it on. We addressed some of the deficiencies that we had in the second ten minutes of the first half, that second quarter if you will. I think they are very good in transition offense of course, but our emphasis was on their execution in the half court. They were playing with some momentum. J.J. Frazier hit a big three in transition and Maten got himself going in the interior. At halftime, we watched some of the things we could have done a little bit better. We just regained that focus and cleared their minds and got back to what is most important to give ourselves a chance to guard these guys, which is pretty difficult.”

On Florida’s defense…
“They played good defense in the first game we played, and we shot the ball well. I don’t think we were ready to compete at the end. As a team, we weren’t ready to compete, which is unacceptable.”

On turnovers…
“It is very frustrating. Turnovers killed us. They kept on killing us. Killed us even more in the second half.”

On not carrying the first half momentum…
“We didn’t come out strong, and turnovers just buried us. They piled up, and added to the ones in the first half, and they kept on rolling. We couldn’t hold them. We tried to pull it in some more, but it didn’t work. Definitely on us. Credit to them, they played a great game, they played hard and competitive. We got to do the same, and play our role and adjust to them the way they adjusted to us.”