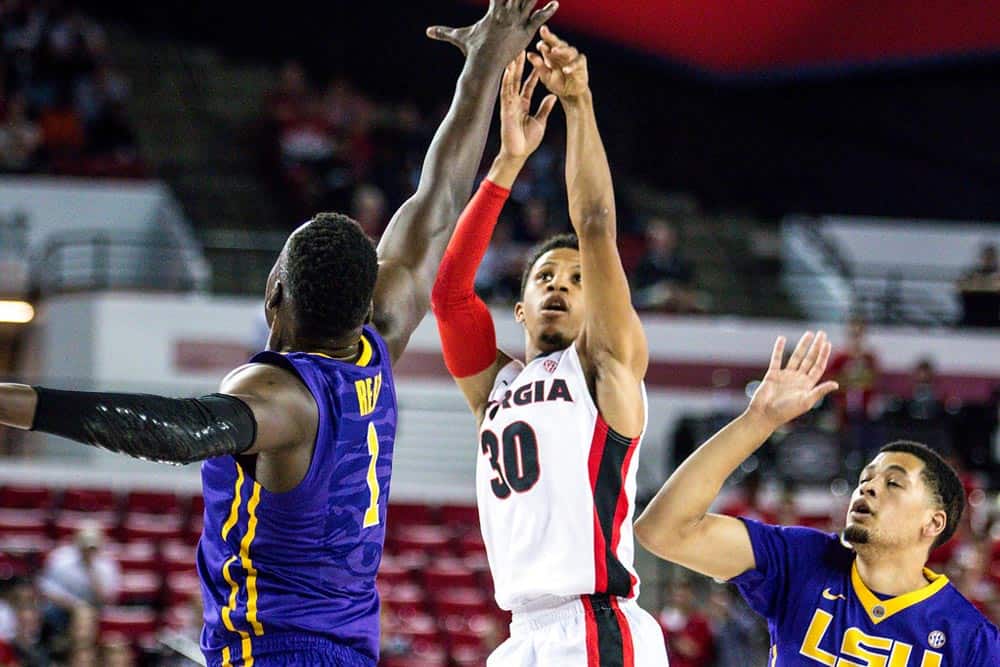 Georgia earned possession down 80-79 with 6.7 seconds left when the ball ricocheted out of bounds following a missed three-pointer by LSU. Frazier, who scored 29 points in the game, took the ball the length of the court off the ensuing inbounds pass and got fouled at the basket, sinking both shots. The Tigers heaved the ball the other way after Frazier’s free throws but the pass was intercepted by Derek Ogbeide, who was fouled and made a free throw to give Georgia the two-point lead.

“[Frazier] certainly made the two biggest free throws of the night,” said Georgia head coach Mark Fox. “LSU has been in every game and we knew that they would be in this game, especially with how short handed we are up front. Our rebounding was suspect tonight, especially in the second half, as we were down, but give LSU credit for making it a heck of a game. At the end, we were composed and we executed what we wanted, and J.J. went to the basket and got fouled. He is one of the best free throw shooters, if not the best in the history of the school, so we have a lot of confidence that he would knock those down.”

Frazier has now scored 28 points or more in four of his last five games. All five starters for Georgia (17-12, 8-8 SEC) scored at least eight points, including Ogbeide and Juwan Parker, who each had 12. William Jackson scored nine points and E’Torrion Wilridge tied his career high with eight. Antonio Blakeney led LSU (9-19, 1-15) with 20 points.

The Bulldogs took a seven-point lead into halftime behind a steady offensive attack, scoring 44 points on 17-of-31 shooting (54.8-percent). Just over ten minutes into the game, the lead got all the way up to 25-11 following an Ogbeide layup inside. Tyree Crump had a stretch in the half in which he hit three-pointers on consecutive possessions after accomplishing the same feat in the second half of Thursday’s win at Alabama. In the first half, Frazier scored 11 points and also dished out four assists.

LSU fought its way back into the game in the second half, chipping away at the lead the Bulldogs held for 29 minutes and 10 seconds going back to the first half. The Tigers tied the game at 69-69 with 6:21 remaining in the game before Frazier went to the line for two shots. He made the first and missed the second, but grabbed his own rebound off the miss and tipped in back in for two. A few possessions later, he was able to convert a three-point play following a Wilridge block on the other end to make the lead 77-71.

A 7-0 LSU run gave the Tigers a one-point lead with 1:25 left on the clock, and they would make it three on the next possession. Frazier then took the ball down the length of the court, drove the lane and passed the ball to Ogbeide, who would lay it in and make the score 80-79. LSU grabbed two offensive rebounds on the next possession, but could not finish at the basket, and Frazier would go on to give Georgia the lead with 1.6 seconds left.

The Bulldogs will be back in action on Wednesday, taking on Auburn at 6:00 p.m., before traveling to Arkansas next Saturday for the regular-season finale.

• J.J. Frazier entered the game needing more than nine points to surpass Terry Fair for eighth in all-time scoring at Georgia, and he passed that mark at 3:41 of the first half. He now trails Shandon Anderson for the seventh spot by five points.

• After trailing 9-7 in the early running, the Bulldogs used a 26-7 run over the next six minutes to seemingly take control of the game with a 17-point cushion at the 8:15 mark of the first, capped by back-to-back treys from freshman Tyree Crump. The shots give Crump four multiple- 3-pointer games, with Georgia entering tonight’s action 3-0 when he cashes in more than once from behind the arc.

• The 81 combined first-half points (44-37, UGA) represented the most in a first half for a Georgia game since the conference opener against Auburn (94).

• LSU tied the game at 69-69 with 6:21 remaining in the game, erasing the first-half, 17-point deficit. Frazier connected for three points on the next trip down the court. The Tigers got their first lead since 9-7 in the first half with a putback layup to take a 78-77 advantage with 1:25 remaining.

• Georgia had the ball with a chance to win, inbounding with 6.9 seconds remaining and inbounding from under its own basket. Frazier was fouled on a layup attempt with 1.6 seconds remaining, and he sunk both free throws to take the lead, which UGA never lost.

• Since Yante Maten’s injury in the opening minutes against Kentucky, Frazier has led Georgia in scoring in all three games. He has totaled 36, 28 and 29 points in those three contests.

On tonight’s game…
“[Frazier] certainly made the two biggest free throws of the night. LSU has been in every game and we knew that they would be in this game, especially with how short handed we are up front. Our rebounding was suspect tonight, especially in the second half, as we were down, but give LSU credit for making it a heck of a game. At the end, we were composed and we executed what we wanted and J.J. went to the basket and got fouled. He is one of the best free throw shooters, if not the best in the history of the school, so we have a lot of confidence that he would knock those down.”

On Frazier’s play…
“J.J. loves competition and that is one thing I loved about him when we recruited him. He just loves to compete and guys that love to compete are better when the game is on the line. That is one of the reasons why he is good, he has that personality trait and that certainly worked to our benefit tonight.”

On getting the team ready for this game…
“We told our team this team is not going to be easy. LSU has been ahead in many games and they have had big leads, double-figure leads on the road. We fully tried to educate our team on how difficult this team could be. You look at their record and you don’t anticipate it to be like that and kids read the newspapers too. I think LSU is probably better than their record but fortunately for us our players and J.J. understand how to win. Today’s win gives J.J. another winning season, J.J. has never had a losing season here and I think his understanding on how to win helped close the game today.”

On how LSU played…
“Well, LSU is a great team, they have great players and they hit a lot of their shots today.”

On the last play of the game…
“Yeah, we gave it to [Frazier] so he could knock it down because he is a clutch player.”

On the good 3-point shooting…
“Well, Coach Fox told me to just keep shooting, and he was giving me the three sign, I just had to take it.”

On good free throw shooting…
“Its very important, I mean even if he was in, free throws are what coaches emphasize, something that we take pride in.”

On the early run…
“It definitely helps your confidence, when guys are hitting shots and being aggressive. It makes the game more fun, and it lets you know that we can score. Just had to step it up on defense.”

On Georgia…
“First of all, I thought Georgia played well. They did a great job down the stretch, making necessary baskets, to finish the ball game off at the free throw line…”

On the “disagreeable” call at the end of the game…
“I’m not going to say I agree or disagree. I just hate that, I’d like to see kids that would finish games, with the position I would like to see. I would like to see a kid who finishes a shot, then finish with a block, and just a lot of kids finish it off. If it is a blatant foul then you have to make that call just like at the end you have to play it out. Just like if they travel at the end when they catch it, they need to go check that out.”

On the referees calling first half versus second half…
“I would assume, but there were maybe opportunities. Not getting into the bonus, there were two fouls there, right there at the end of the first half. I think they were able to foul their way out. I think we wanted to get the shot off and get the foul, but they had the least amount of fouls at the time they were trying to foul the time off. They called someone off the bench to do that. Good defensive basketball team.”