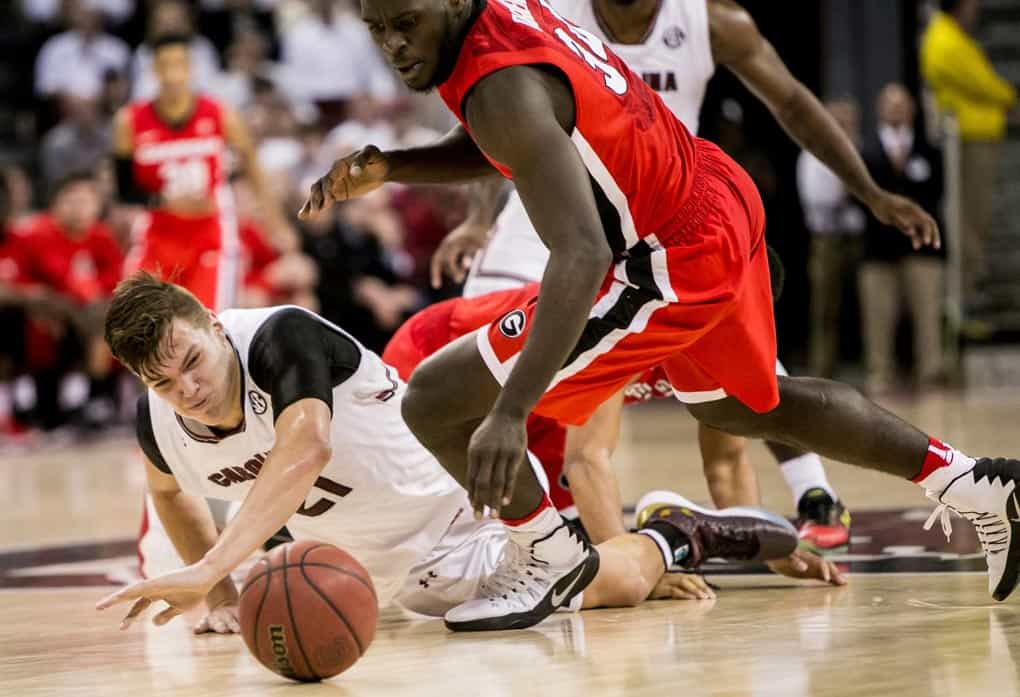 COLUMBIA, S.C. – The Georgia Bulldogs fought to the end but fell just short to the No. 19 South Carolina Gamecocks 77-75 in the closing seconds Saturday afternoon at Colonial Life Arena.

The Gamecocks (19-4, 9-1) led by nine points with 2:21 left in regulation before the Bulldogs (13-10, 4-6) reeled their deficit back in. J.J. Frazier hit a floater to make it 73-68 with a little over a minute remaining. Then Georgia forced a shot-clock violation on the Gamecocks’ following possession and made it to the foul line where William Jackson II cut it to 73-69 with 26 seconds left. Despite the Bulldogs continuing to make baskets down the stretch, South Carolina converted their free throws to secure the win.

“It was a tight game and we anticipated this,” Georgia head coach Mark Fox said. “It was a really hard-fought physical game and this was probably five or six games in a row that it has come down to the last minute. If you look at the totality of the 40 minutes, we finished at a shooting percentage that we are pleased with but we just have to improve those defensive numbers a little bit. We also gave up some second chance baskets in the second half that were back breaking.”

At the end of the first half, both teams were notched up at 38-all. The first 20 minutes of the game was a back-and-forth affair that consisted of 14 lead changes and seven ties. Sindarius Thornwell and Maik Kotsar led the Gamecocks with 11 points each while Maten had 10 points for the Bulldogs.

The second half proved to be more of the same close play as the game sat at 51-51 after the opening 10 minutes. South Carolina pulled away with an 8-0 run starting at the 9:44 mark, but the Bulldogs didn’t go away. Frazier hit a pair of free throws to cut it to four points at the 4:37 mark. South Carolina responded with two free throws and a Justin McKie 3-pointer that stretched their advantage to nine points, the largest of the game, at 67-58 with 3:17 remaining. The lead proved to be just enough as the Bulldogs ran out of time.

Georgia shot a 49-percent clip from the floor compared to South Carolina’s 43-percent shooting. The Bulldogs also outrebounded the Gamecocks 36-28.

Georgia returns home to Stegeman Coliseum to play the Florida Gators Tuesday. Tip-off is slotted for 7 p.m. ET and will be televised on ESPN2.