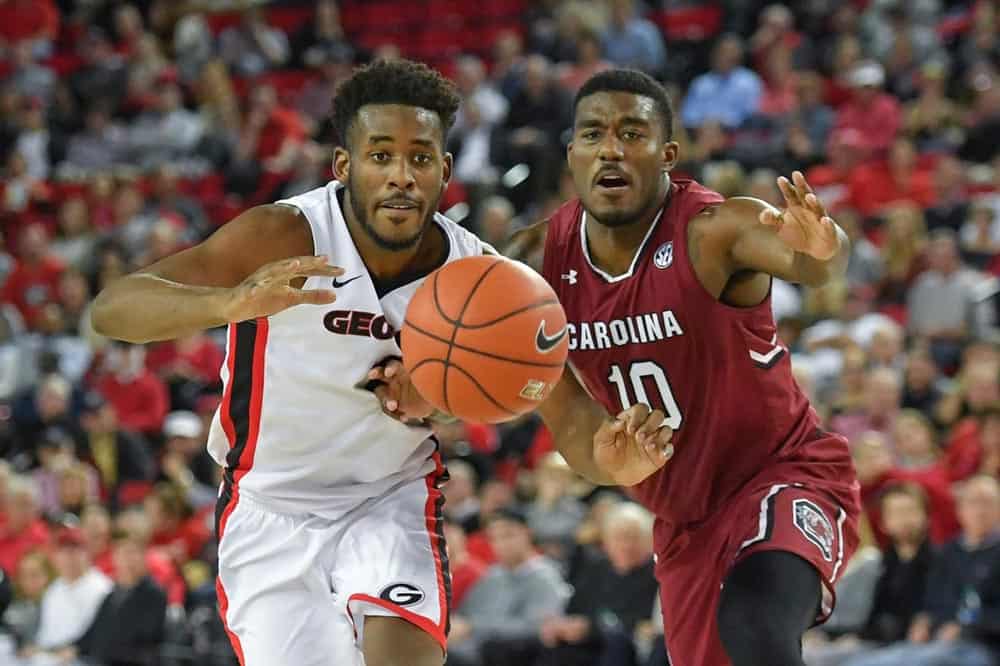 Maten led the way for Georgia (9-5, 1-1 SEC) with 18 points, including a three-pointer that cut the lead to just one with under a minute to go in the game. In addition, Maten grabbed 10 rebounds to give him his fourth double-double of the season and 14th of his career. J.J. Frazier added 16 points for the Bulldogs, while Juwan Parker scored 12. PJ Dozier scored 24 points to pace the Gamecocks (11-3, 1-0).

“We thought it would be a rock ‘em, sock ‘em fight,” said Georgia head coach Mark Fox, “and it was. We didn’t start the second half well. Then, we got back in it, but we didn’t rebound it well late. However, give South Carolina all the credit for the victory. They played well.”

With just over three minutes to play in the first half, Maten got the crowd going with a battle on the offensive glass that led to a bucket a one-point lead. After two unsuccessful attempts to get the ball in the basket, Maten grabbed his rebound each time and eventually put it in over two defenders while falling to the ground. He finished the first half with nine points as the Bulldogs trailed by just two going into the break.

Despite a slow start to the second half and falling behind by as much as eight, Georgia was able to get into the bonus with over ten minutes left in the game and the free throws kept the game close. After key defensive rebounds by Frazier and Jordan Harris and buckets on the other end, the Bulldogs went on a 6-0 run to cut South Carolina’s lead to two with 8:27 to play.

After South Carolina got the lead back up to eight points, Georgia fought back, this time cutting it to one with just 57.9 seconds remaining. Frazier drew a double team and dished it to Maten for a three-pointer from the top of the key. The Bulldogs were not able to wrestle the lead away from the Gamecocks down the stretch.

Georgia will be back in action Saturday, hosting Missouri at 1:00 p.m. The game will be televised by the SEC Network.

• The Bulldogs and Gamecocks played a virtually even game in the first half as the two teams battled their way to 13 lead changes and 11 ties that lasted 7:55. The half ended with two lead changes in the period’s final 13 seconds as South Carolina was able to snag a 36-34 lead into the break thanks to a buzzer-beating trey from PJ Dozier.

• Yante Maten entered the contest needing 10 points to become Georgia’s 48th 1,000-point scorer in program history, and he almost achieved the feat in the first half with nine points. He crossed the quadruple-digit threshhold at 9:41 of the second and finished with 18 points.

• Juwan Parker has emerged with a hot hand for the Bulldogs, registering double-digit points for the third-consecutive contest. Parker entered this season with one such game in his career.

• After trailing by as many as nine points in the second half, a Maten three-ball with 57.9 seconds remaining brought Georgia within one point of the Gamecocks at 62-61, but South Carolina responded with two points and then forced a turnover to help put the game out of reach.

• Georgia won the rebounding battle for the sixth-straight game, this time 40-34.

• The result marked the first time this season that Georgia did not follow a loss with multiple victories and it snapped a four-game win streak for the Bulldogs over South Carolina.

On the game…
“We thought it would be a rock ‘em, sock ‘em fight, and it was. We didn’t start the second half well. Then, we got back in it, but we didn’t rebound it well late. However, give South Carolina all the credit for the victory. They played well.”

On the flow of the game…
“We knew it would be a night that it wouldn’t be clean execution on offensive. We were able to get to the line like we thought we would be able to but that wasn’t enough.”

On South Carolina’s defense…
“All credit to their defense. They had us out of sorts for a little bit. Not many teams play defense like that and are able to disrupt offensive flow. There were a couple of plays where we needed a basket or a stop, but we didnt get it, because we didn’t follow through on it.”

On the outcome of the game…
“South Carolina always plays good defense, thats nothing new, but as a point guard, as a senior, as a leader, I need to play better in order for us to win.”

On rebounding from this loss…
“This loss by itself will motivate us. Nothing else needs to motivate us, but this feeling.”

On Georgia…
“They’re real good players. Georgia is very disciplined and very good and they play to their strength. I just want to say that I don’t think (Mark Fox) gets the credit he deserves for the kind of job that he does for his team. His team plays so discipled and it’s hard to get his team out of character. This is my opinion and it always has been – in baseball when your catcher, pitcher, shortstop, center fielder are good, you’ve got a chance.

Basketball, if your point guard and center are good, you’ve got a chance and they are as good of a tag team as you can argue that we’ve got in the conference and around the country. They went through (Yante Maten). I thought we made it hard for them but he’s a heck of a player.”