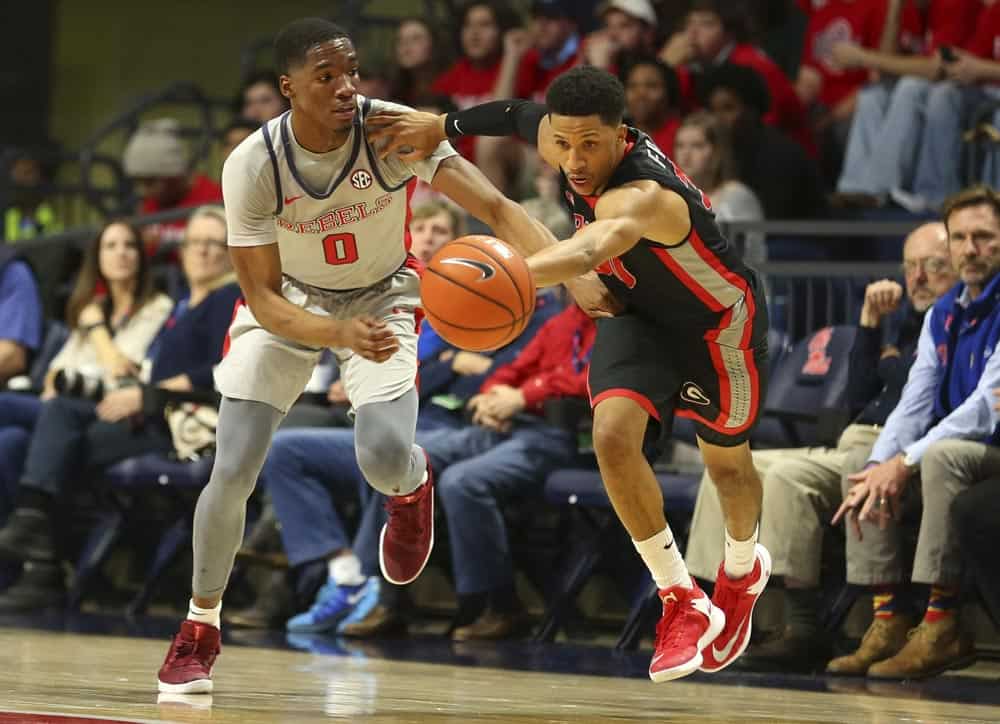 OXFORD, Miss. – The Georgia Bulldogs (11-5, 3-1) out-battled the Ole Miss Rebels, 69-47, limiting the home team to their lowest scoring output since 2008 Wednesday night at The Pavilion in Oxford.

Senior guard J.J. Frazier poured in 17 points to spearhead the Georgia attack while junior forward Yante Maten recorded a double-double with 15 points and 11 rebounds. Frazier knocked down three 3-pointers and was a perfect 4-for-4 from the free throw line.

“We felt really good about our plan coming into the game,” said Georgia head coach Mark Fox. “We had a lot of confidence in the scheme that we had and the kids executed it very well. I thought we fouled too much and we ended up in our zone again since we were fouling so often in our man-to-man but our scheme in our zone was very effective tonight as well.”

In the first half, the Bulldogs held the Rebels scoreless for a four and a half minute stretch and a separate span of over three minutes without a point. The stifling defense paired with a blitzing offense helped Georgia gain a 30-18 advantage at the break. Frazier led all scorers with 10 points including two 3 pointers. Georgia shot 43 percent from the field and went 8-of-9 from the free throw line compared to Ole Miss’ 17 percent from the floor and 6-for-11 from the charity strike.

The Rebels (10-6, 1-3) cut the Bulldogs’ lead to single digits several times in the second half but did not get closer than seven points at any point. Georgia went on an 8-0 run at the 5:13 mark of the second half to extend the lead to 17 points at 61-44. After an Ole Miss basket, the Bulldogs rallied off another eight uncontested points to further enhance their advantage to 23 points at 69-46 in the final minutes.

Georgia shot 40 percent from the floor and went 22-of-25 from the foul line. Ole Miss were held to 27 percent shooting on the hardwood and managed just 17-of-32 from the free throw line. On the glass, Georgia outrebounded the Rebels 44-34.

“He is a freshman that is making mistakes but he is playing through them,” Fox said about Harris. “And when he plays through them and keeps competing, he makes a lot of positive plays too, more positive plays then negative ones. He had two blocks on 3-point shots, a made 3-pointer and a nice drive in the second half. I really thought he responded well in the second half of the game.”

The Bulldogs continue their road trip with a matchup against the Florida Gators Saturday in Gainesville, Fla. The tip is scheduled for Noon ET and will be televised on ESPN2.