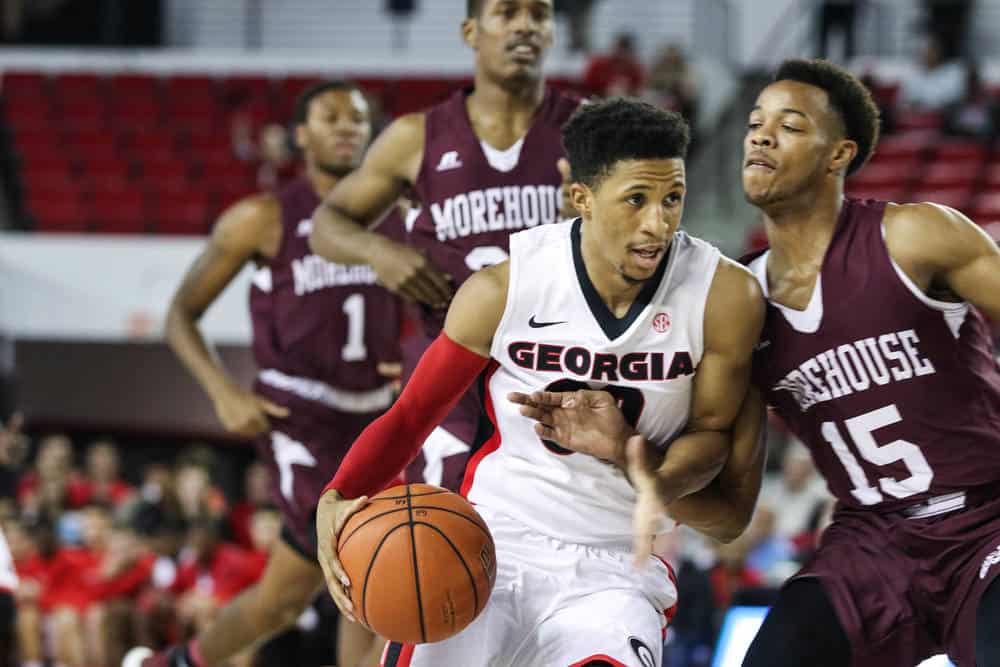 Freshmen Tyree Crump (16 points) and Jordan Harris (11 points), as well as senior Kenny Paul Geno, who scored 15, each set career-high scoring outputs for the Bulldogs. Wednesday marked the first time since Feb. 3, 2013 that two freshmen scored in double digits, when Charles Mann and Kenny Gaines each scored 11 at South Carolina in their first season.

“We are never going to have an assigned third scorer,” said head coach Mark Fox. “We are just going to get more guys to score the ball. Kenny Paul Geno, who was really sick in Kansas City, finally was feeling good and we were able to get him back on the floor. He was playing really good. Tyree found a few balls go into the basket, which he needed to see. Jordan gave us a punch here and there. We put 86 points on the board and our two best players didn’t play great.”

The Bulldogs went on a 13-4 run to end the first half and took a 36-30 lead into the break. Ten of the team’s 12 first-half field goals came off of assists, while the total of 21 assists for the game is a new season high. Geno made two three-point field goals in the half, which were his first two of the season. He scored a total of nine points in the opening period, the most he has scored in the first half of a game in his career.

An alley-oop from J.J. Frazier to Mike Edwards started the second-half scoring for Georgia, while the success from three-point range continued throughout the game. The Bulldogs shot 5-of-9 from deep in the second period and were 11-of-22 on the night from behind the arc. The 11 made three-pointers are the most for Georgia on the year.

Georgia will return to action Sunday, taking on the Marquette at Stegeman Coliseum at 2 p.m.

* Junior Pape Diatta got his first starting nod in the contest. He averaged 13 minutes per game entering today’s action and saw 16 minutes of floor time tonight.

* After starting 1-for-7 from the floor over the first three-plus minutes, Georgia  answered a 5-3 Morehouse lead with a 15-8 run on 5-of-6 shooting, book-ended by Jordan Harris treys. The run also included the ffirst 3-pointer of the year from Kenny Paul Geno.

* Geno displayed the best scoring effort of his career on Wednesday night, claiming 15 points. He finished with nine points in the first 20 minutes, which tripled his season-best scoring output entering tonight’s action. His four 3-pointers in the contest also represented a new career high.

* Georgia had four players in double digits for the first time this season. The last time the Bulldogs had that level of depth in scoring was the final game of the 2015-16 season against St. Mary’s in the second round of the NIT (Frazier-13, Maten-12, Charles Mann-13, Kenny Gaines-11).

* Georgia had two freshmen reach double-digit scoring in the same game for the first time since Gaines (11) and Mann (11) hit the mark at South Carolina (Feb. 2, 2013).

On production off the bench…
“We are never going to have an assigned third scorer. We are just going to get more guys to score the ball. Kenny Paul Geno, who was really sick in Kansas City, finally was feeling good and we were able to get him back on the floor. He was playing really good. Tyree found a few balls go into the basket, which he needed to see. Jordan gave us a punch here and there. We put 86 points on the board and our two best players didn’t play great.”

On younger players getting minutes…
“Our young guys are getting better but they have to continue to learn from every experience. Mike Edwards is getting better; he needs time on the floor. I felt like E’Torrion Wilridge, who is playing two spots for us, gave us some really solid minutes at the four tonight, so I thought that was a plus. He hit a three and got another basket so that was good to see that he had probably his most productive game of the year. Everybody that comes off the bench has to be able to chip in where they can and tonight those guys got a bigger chunk of minutes.”

On the win …
“It is good to get a win. I don’t think we played particularly well. That is not taking anything anyway from Morehouse. We did get the win and we will learn from it and move forward.”

On a slow start…
“We weren’t mentally locked in. Not just me and J.J. [Frazier], but the whole team. It looked like we were playing a little lackadaisical, and you can’t ever be like that when playing basketball.”

On having a tough practice yesterday…
“That’s no excuse. Coach tells us every time we need to play with enthusiasm, and we should have been ready. Give Morehouse credit, they’re a really good team.”

On the team finding its rhythm…
“We just knew we had to regroup in timeouts. There were several defensive misses and all of a sudden they were up three after five, or something like that, I can remember what it was. But we have one of the best big men in the country, we have to find him first. We found our rhythm in the second half.”