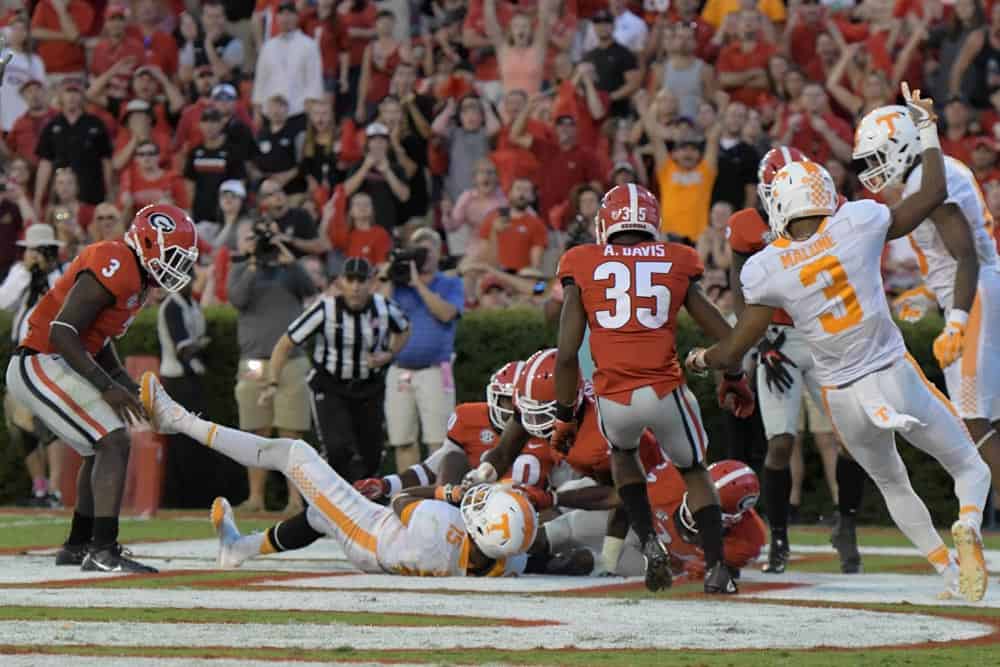 ATHENS – The freshman-to-freshman connection of Jacob Eason to Riley Ridley of 47 yards sent Sanford Stadium in an uproar as the beautiful strike down the left sideline nearly served as Georgia’s second dramatic win of the season.

After the thought of a big win for the Bulldogs went through my head, I took a quick step back. I remembered that Georgia had lost three times since 2012 on unthinkable scenarios in the last few seconds, including the pass tip Hail Mary in 2013 at Jordan-Hare Stadium.

“Do you remember the Auburn heartbreaker in 2013?” I said to a friend two seats over from me in Section 139, where only a hedge stood between our seat and the unforeseen. “Georgia better not let something like that happen.”

He took a deep breath, realizing the possibility of that, “Yes, this is way too close for comfort,” he replied in laughter.

After Georgia’s special teams issues rear their ugly head as a short kick by Rodrigo Blankenship and subpar kickoff coverage gives Tennessee the ball 43 yards from the end zone and a victory, the three of us anxiously look on, hoping to leave Sanford Stadium in elation.

Tennessee’s quarterback Joshua Dobbs steps back, with six Bulldogs standing in the end zone, hoping to swat any ball that may come their way. However, something accidental occurred as Quincy Mauger knocked DeAndre Baker out of position, leaving Volunteers receiver Jauan Jennings with an open crease without a Georgia defender in front of him. He hauled in the catch and a dog pile ensues on enemy turf, while Dominick Sanders and other Bulldog defenders lie distraught.

And as a result, the Volunteers claim their victory on a purely miraculous last play, and nearly 93,000 fans experienced a huge change of emotion, with 85 percent of those attendees going from elation to agony in ten seconds of game action. Another thrilling game is added to the Georgia-Tennessee rivalry, and the 2016 version goes down in Volunteers lore.

Adding to the agony for Georgia fans, Tennessee head coach Butch Jones said the Hail Mary wasn’t the original call as his staff had planned for a short pass and multiple laterals were to occur, and the same result may have not been the case. Jones overruled the original tactic, and the Volunteers head man said he “had a feeling,” and it now looks like a move of pure genius.

“Sick way to lose, obviously,” Smart said. “That’s something we practice every week – last-play defense. You put your best jumpers in the end zone and everybody gets up and gets the ball down. We do drills to rep it. Their kid just went up and got it.”

Georgia defensive back Maurice Smith, who was one of the Bulldogs most dependable players in the loss, showing reason for why Georgia pushed so hard to add him from Alabama as a graduate transfer. Smith finished Saturday’s game with seven tackles, a fumble forced and an interception.

He broke down the last play, at a loss for words.

“I was in there. I just did my job and was hoping and praying my other teammates did theirs,” Smith said. “We’ll watch the film and get it cleaned up. I still don’t know what happened.”

Sony Michel, who had a solid performance offensively, stressed the importance of looking ahead and forgetting about the Tennessee loss.

Michel was Georgia’s leading rusher against Tennessee, with 91 yards and a touchdown, in a game where Georgia’s star Nick Chubb was limited to only one carry due to injury.”

We have that 24-hour rule; whether we win the game or lose the game, we have 24 hours, then we move on,” Michel said. “We have another SEC opponent next week, which is a big game for us. Within these 24 hours, you have to move on.”