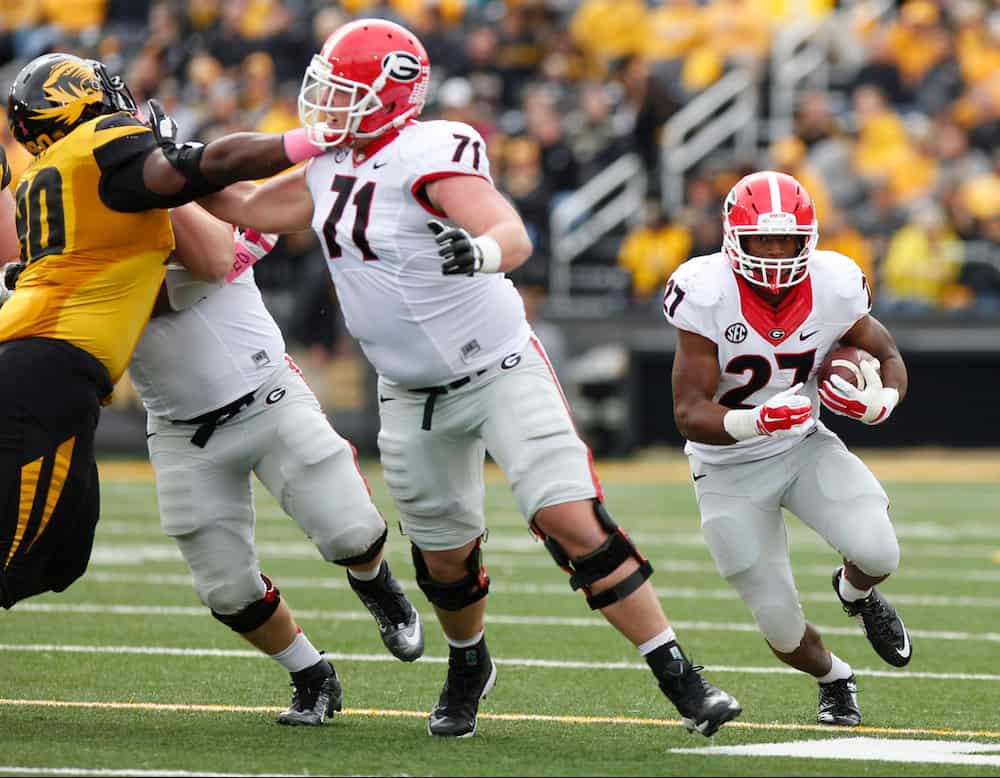 The cupcake games are over all around college football, and it’s time to dive into the marquee match-ups of conference play.

Georgia opens up their SEC slate on Saturday night against Missouri, as they travel to Columbia for the third time since the Tigers have joined the conference. There’s plenty on the line in this opener, and both of the respective head coaches make their SEC coaching debuts.

How Georgia can win

Georgia can come out victorious if they’re angry about their putrid performance against FCS opponent Nicholls State just a week ago. They should have the intensity and energy that their head coach Kirby Smart preaches, and that’ll lead them to victory in a road environment.

In addition, Georgia has some major keys on both sides of the ball. Offensively, they must open up the playbook and not rely solely on the run game. Everybody in America knows they have Nick Chubb, and with 52 carries and 302 total yards in the first two games, every team will target him. Therefore, Georgia needs to open up the passing game and place more trust in their quarterback, whether it be freshman Jacob Eason or senior Greyson Lambert.

And if Georgia chooses to run a significant amount, and they probably will, the offensive line has to block. They lacked physicality against Nicholls State, and Smart noticed and addressed it as preparation began for the showdown against the Tigers.

“I think a big part of the offensive line is toughness and strike. We didn’t do that on Saturday,” Smart said. “We’re moving on from that now, and we’ve got to go out and do a better job. It’s a really good Missouri defensive line that’s going to present a lot of the same challenges.”

Georgia will also have junior running back Sony Michel available in which he should receive a significant workload. He serves as a versatile player within the offense and can serve as a weapon both with spelling Chubb or as a slot receiver.

Defensively, Georgia has to contain Missouri’s spread offense, and Smart has seen some struggles in shutting down the spread during his tenure as a defensive coordinator.

He has a challenge on his hands with Missouri sophomore quarterback Drew Lock, who threw for 450 yards and five touchdowns last Saturday against Eastern Michigan. Lock displayed exceptional arm strength, and Smart credited him for it.

“He’s very talented, first and foremost,” Smart said during the coaches’ teleconference on Wednesday. “He’s got great touch, arm strength and throws the ball to all parts of the field. (Therefore), he forces you to defend the whole width of the field. That’s really tough when they have the wideout with a good the skill set. The wideouts are really productive and do a great job at run after the catch, and we saw that last weekend.”

Lock has a few playmakers around him, and the Bulldogs secondary has a big task ahead of them. Missouri’s passing production has skyrocketed from last in the SEC in 2015 to the top of the ranks this season. Needless to say, Georgia will look to halt the Tigers production and will need to do so in order to win.

There aren’t many that give Missouri enough credit or much of a chance to beat Georgia, but maybe they should.

Defensively, the Tigers have always been strong and have immense talent in the front seven. Led by junior defensive lineman Charles Harris and senior linebacker Michael Scherer, Missouri’s defense promises to wreak havoc on the opposing offensive attack. And they can beat Georgia if they can shut down the Bulldogs offense.

Chubb averaged only four yards per carry last Saturday, and Missouri will look to hold him to a similar, unproductive rushing total. However, Missouri head coach Barry Odom realizes that he can be a major threat, as Chubb was in his previous trip to Columbia, Mo.

“He’s a tremendous player,” Odom said. “One of the best in the country, if not the best.”

Aside from the running game, Georgia’s previously mentioned struggles on the offensive line could cause them to be dominated yet again. The Tigers could also bring pressure on the Bulldogs’ signal callers and the inexperience could be troublesome

Missouri has the talent to contain the Bulldogs offense, and if offensive coordinator Jim Chaney and his group fails to find sustainable success, Georgia could struggle with putting up points.

Offensively, Missouri may have found gold in the development of Drew Lock. He’s the integral part of their offense, but its unknown if the Tigers offense can maintain the productivity they found against Eastern Michigan. If he’s able to find open receivers and have time in the pocket against Georgia’s inexperience at defensive line, the Tigers could be clicking on all cylinders and that could lead them to victory.

While I spoke highly of Missouri and all they have to offer, Georgia will be energized and ready to go against the Tigers. Smart preaches playing physical football as that’s “The Georgia way,” and his team will get back to doing just that in their first road test.

Georgia does need to mix up the offense, but it all starts with Nick Chubb as he will serve as the ignition to a Bulldogs victory. Chubb’s last trip to Faurot Field in 2014 is where he became prevalent rushing for 143 yards and a touchdown, and he’ll have similar success this time around. After Georgia’s blocking issues were highly criticized after their embarrassing showing against Nicholls State, they’ll wake up and show some energy and serve as an integral part in a Bulldogs victory.