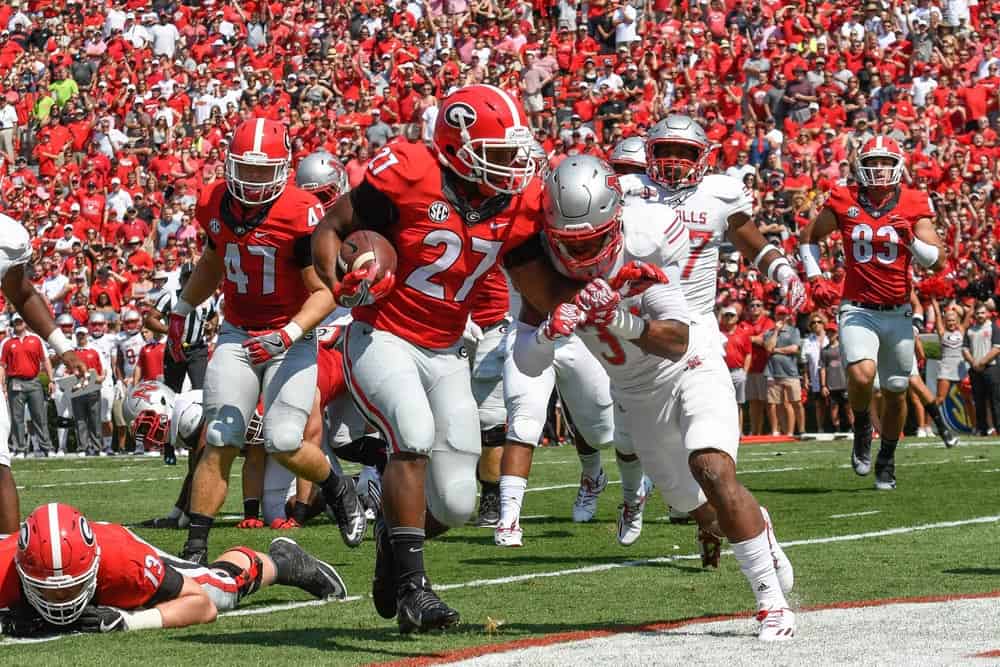 Isaiah McKenzie’s speed ignited a second-half spark for No. 9 Georgia, as Kirby Smart’s first game back in Sanford Stadium ended in a 26-24 victory against Nicholls.

McKenzie broke away in the third for a 66-yard touchdown, giving Georgia back the lead for good after Nicholls went up 14-13 about eight minutes into the second half. The junior finished the game with 142 all-purpose yards.

“It’s important that we understand that our football team has got to get better,” Smart said. “It’s frustrating. A lot of guys didn’t execute, didn’t play well, and that’s my responsibility. We’ve got to improve because there are good teams down the road. … Other schools work on football, too. I’m disappointed we didn’t go out and execute.

In his first collegiate start, Jacob Eason went 11-for-20 with 204 yards. His main targets of McKenzie and Terry Godwin combined for 108 of Georgia’s 206 receiving yards. Nick Chubb led the rushing corps with 80 yards, while Brian Herrien followed with 47.

The defense was guided by Trenton Thompson’s 11 tackles, including five solo stops and three tackles for loss. Reggie Carter totaled seven tackles in his first game since the 2013 Missouri contest after sitting out last season with an injury. Interceptions by Dominick Sanders and Juwan Briscoe accounted for two of Nicholls’ three turnovers.

Georgia jumped ahead early, scoring on the game’s opening possession in just under two minutes of play. An Eason 36-yard pass to Godwin moved the Bulldogs downfield, setting up Chubb for a six-yard touchdown run. A William Ham field goal brought it to 10-0 in the second before Nicholls capitalized on a Bulldog fumble for a 10-7 score at the half.

Out of the locker room, the Georgia defense forced a Nicholls punt, getting the offense on the field for another field goal and a 13-7 advantage. The Colonels reversed the lead with 6:48 on the clock, as a Chase Fourcade 20-yard pass to Jarrell Rogers put the visitors ahead 14-13.

After a 55-yard punt return earlier in the half, McKenzie again used his wheels to march down the field with help from a Javon Wims’ block for the go-ahead touchdown. Two plays later, Aaron Davis forced a fumble, as Lorenzo Carter got the scoop-and-score to put the Colonels at a 26-14 distance after three.

The Colonels’ Jeff Hall intercepted an Eason pass at the Nicholls’ two, returning it 91 yards ahead of a field goal with 7:50 left to play in the contest. Nicholls continued to chip away at the Georgia lead, as a muffed punt by the Bulldogs turned into a C.J. Bates score, but crucial runs from Chubb in the final minutes helped Georgia hold on to the win.

The Bulldogs make their SEC debut next Saturday, heading to Columbia, Missouri, to face the Tigers. The teams kick off at 7:30 p.m. ET on SEC Network.

*Home Opener: Ninth-ranked Georgia posted a 26-24 win over Nicholls in the first-ever meeting. Today marked the home debut of coach Kirby Smart, and the Bulldogs are now 2-0 in non-conference action this year with the SEC opener at Missouri next Saturday night.

*Defense Responds: Nicholls scored 24 points and 17 of those came following Bulldog turnovers. Overall, the Colonels had one sustained TD drive (11 plays, 75 yards) with the others two TD drives covered just 9 and 30 yards plus their field goal drive was minus one yard. They tallied 236 yards of total offense on 61 plays. Georgia was led on defense by a career-high 11 tackles by sophomore Trenton Thompson and 7 by junior Reggie Carter.

*Eason Wins First Career Start: In his first career start, freshman QB Jacob Eason (11-for-20, 204 yards, 1 TD ,1 INT) directed a 67-yard scoring drive in 2:06 to give Georgia an early 7-0 edge. He then connected with sophomore Isaiah McKenzie for a 66-yard touchdown in the third quarter to retake the lead 20-14. The 66-yard score was the longest receiving touchdown for the Bulldogs since Aaron Murray connected for an 83-yard score with Todd Gurley versus Florida in 2013. After having career highs of six catches for 122 versus #22 North Carolina last week, McKenzie finished with 2 catches for 61 yards and 142 All-Purpose yards (48-Punt Ret., 33-Rush, 61-Rec) on Saturday. Graduate QB Greyson Lambert (2-for-3, 2 yards) came in during the 4th quarter and finished the game as the Bulldogs ran out the clock after the Colonels had made it a two-point contest and had pinned the Bulldogs down at their own 7.

Sophomore TB Nick Chubb (20 carries, 80 yards, 1 TD) scampered in for the team’s first score from six yards out for his 24th rushing touchdown of his career. Freshman Brian Herrien had eight carries for 47 yards in his second collegiate game. Redshirt sophomore PK William Ham also scored eight points on two field goals and two extra points. He hit a 23-yard field goal in the second quarter and then missed a 52-yard field goal in the first half. Ham connected on another 26 yarder in the third quarter following a 55-yard punt return from sophomore Isaiah McKenzie. Ham is 3-for-5 on the year.

*For Starters: Sophomore receiver Jayson Stanley and Eason got their first career starts. Eason became the sixth true freshman QB in school history to start a game, and the first since Matthew Stafford in 2006. The Bulldogs have now had a combined eight first-time starters on both sides of the ball in 2016, including six on offense. Junior Glenn Welch snapped for the first time on PATs and punts. Junior ILB Reggie Carter started his first game since the 2013 Missouri contest after sitting out last season with an injury. This was his second career start. Senior Charlie Hegedus played for the first time in his Georgia career, lining up on a punt return. Hegedus played in 20 games and started one for N.C. State in 2012-13 before transferring to UGA. Also of note, junior TB Sony Michel returned to action for the first time this year after coming from an arm injury and had one catch for 12 yards and three carries for three yards.

*Points Off Turnovers: The Bulldogs recovered two turnovers in the first half and a third in the third quarter and gave up two fumbles and an interception. Nicholls scored 17 points off its recoveries while Georgia scored six points. Sophomore DB Juwuan Briscoe snagged the first interception of his career on the Colonels’ opening drive. The Bulldogs went three-and-out on their next possession. This marked the first turnover forced for Georgia this season.

Junior SS Dominick Sanders grabbed his 10th career pick and first of the season at the 6:23 mark in the second quarter. However, Georgia could not put any points on the scoreboard. At the 2:46 mark, Chubb caught a pass from Eason and then fumbled the ball at the UGA 30. The Colonels scored on the following possession. Junior CB Aaron Davis hit the Nicholls’ QB and forced a fumble deep in the Colonels’ territory. Junior OLB Lorenzo Carter scooped the fumble and returned it 24 yards for a touchdown. This marked Georgia’s first returned fumble for a score since Leonard Floyd took off for 96 yards at Tennessee last year. Eason’s first career interception came in the fourth quarter off a tipped ball and the Colonels returned it 91 yards to the UGA 7. Nicholls turned the turnover into a field goal after going -1 yard on its drive. A fumble by Isaiah McKenzie trying to field a punt late in the 4th quarter was recovered by the Colonels at the Bulldog 10 and two plays later, it led to a TD as Nichols closed the gap to 26-24 with 3:42 left.

The Bulldogs are currently minus one in turnover ratio. Georgia has given up 17 points on its turnovers and scored six on its collected miscues in 2016 (failed two-point conversion after Carter’s touchdown).

*Up Next: The Bulldogs (2-0) travel to Columbia, Mo., next weekend to face Missouri in the SEC opener for both squads. The SEC Network will televise the game at 7:30 p.m. ET.

On the win …
“It’s important that we understand that our football team has to go get better. It’s frustrating. A lot of guys didn’t execute, didn’t play well, and that’s my responsibility. We’ve got to improve because there are good teams down the road. … Other schools work on football, too. I’m disappointed we didn’t go out and execute. We’ve got to perform better. We didn’t perform the way we should have. It’s in the books and we have to move on. They have to understand we need to practice really good to play really good. We need to practice this week with efficiency.”

On the offense …
“We hit some plays on that first drive. When the offense has in rhythm, it’s good. We never had the rhythm after the first drive. The rhythm was gone. … We didn’t run the ball real well today. They whipped us front. There wasn’t a lot of room up there. They loaded up on the run.”

On next Saturday’s game at Missouri …
“Missouri is a tough place to play. Every SEC team can beat another SEC team any week. We have to go to the drawing board, get to work, get more physical, and show improvement from Week 2 to Week 3.”

On quarterback Jacob Eason …
“When you start a true freshman at quarterback, it’s always challenging. There are no easy games. He’s got to continue to improve, manage the huddle and make good decisions. He’s a freshman, but he’s a talented freshman who can make plays. It’s a balancing act.”

On overall game….
“It’s not surprising. We knew these guys came out here to play for their first game of the season. We expected them to come with a lot of energy and they showed it.”

On rushing struggles…
“Those guys played hard and they out-hit us for the entire game, almost. A lot of stuff we’ve never seen, we’ve never had tape on those guys, so coming into this game we didn’t know what to expect but we still have to do what we are supposed to do.”

On his touchdown….
“I was trying to get an interception, but it just rolled to me so I guess I had to run it in. That was it. I was just happy to get points on the board.”

On Nicholls’ performance…
“We came in the game knowing that they were going to play hard. They’re a great team and coached very well. They came out and played hard and we have stuff that we have to fix.”

On readiness to play…
“I feel like we came out ready to play but I also feel like we made mistakes. We have to learn from those.”

On next game…
“You can’t underestimate anybody. You’ve got to come out with the mindset of being aggressive, making plays, executing and just having the right mindset of certain keys, eyes and tackling. Those things tie into a football game.”

On today’s performance…
“I could have done better in the kicking part of the game. I’m just hoping to improve and get better as a team.”

On any improvements going forward…
“We need to be more physical, play our game and do the things that Georgia does. We need to prepare harder during the week and that’s what I’m hoping to do this week.”