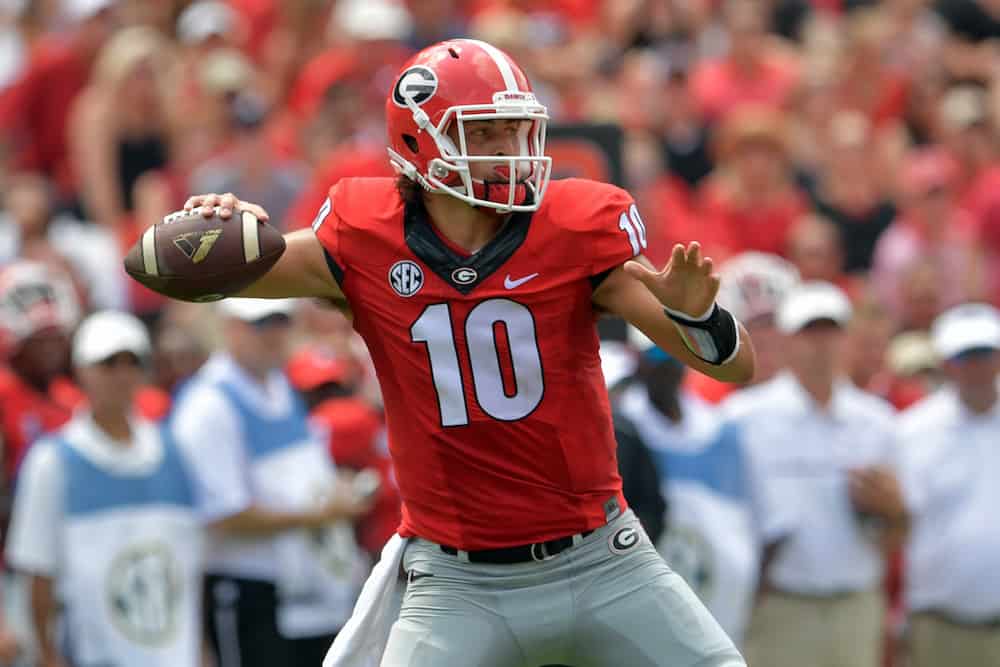 Although he did have some freshman blunders, Eason did throw for 204 yards and a touchdown on 11 completions en route to Georgia’s 26-24 victory over Nicholls State last weekend. Smart saw Eason have minor successes that a casual fan wouldn’t see, and is pleased with his improvements from week-to-week.

Smart believes that struggles across the board, aside from Eason, led to some of his struggles. In an attempt to take some heat off of the fan-favorite behind center, Smart credited him in many different areas.

“Jacob’s in a good place mentally,” Smart said during Wednesday’s SEC Coaches Teleconference. “He had a couple of misreads and didn’t look at the right thing first in the game, but he had some really good plays too. He stayed in the pocket, he threw some good balls and he’s really at his best when he can make those downfield throws and show some velocity on the throws.

“He also handled the huddle much better than he did in the previous game, so not a lot of the woes offensively were his fault. Some of that was just a lack of ability to run the ball and play with physical toughness. He handled things much better than the first game and we hope he continues to show that kind of improvement as we move forward.”

Barry Odom, Missouri’s head coach, speaks highly of Georgia’s quarterback play and their offense as a whole in preparation for their SEC opener against the Bulldogs. Georgia could play both the freshman and senior Greyson Lambert, and Odom has been preparing for both of the quarterbacks.

While Georgia’s main offensive threat is the run game, Odom believes the passing game provides issues defensively as well. Odom said that any mistake could prove costly and his defensive group must be aware of the situation.

“Both (Eason and Lambert) are skilled quarterbacks that present problems for us defensively,” Odom said. “You’ve gotta be aware of who’s in the game, because they can do some of the same things and have success doing it. I’m impressed with them on offense, and it’s difficult to come up with a plan for them. But both quarterbacks efficiently run the offense and if your eyes are in the wrong spot, they’re going to exploit it quick.”

Georgia enters their third day of game planning for Missouri, and Smart was once again asked about the starting quarterback for the Missouri game, and he was mum on the situation once again.

He believes its too early in the week to make a decision, but hints it could come shortly after Wednesday’s practice. For the first two weeks of the season, the starter has been reported on a Thursday, prior to Smart giving official word.

“We’ve gotta get through today’s practice and look at some things,” Smart said. “We’ll try to make a decision from there (on the starting quarterback), but we’re not ready to do anything right now.”