Georgia looks ahead to home opener against Nicholls State

Georgia looks ahead to home opener against Nicholls State 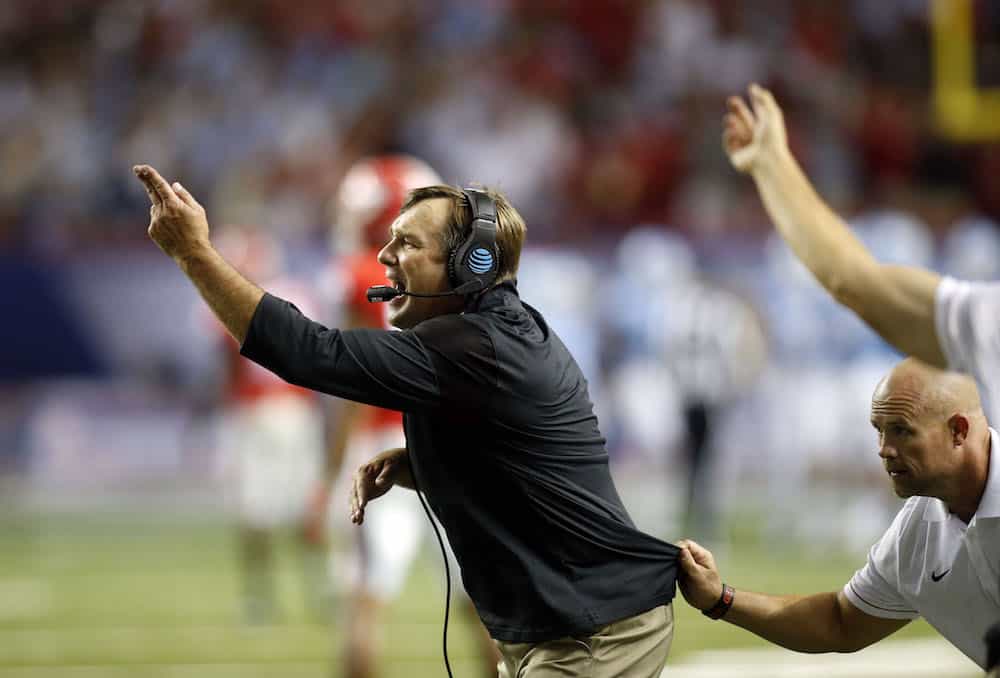 Georgia won their season opener, but head coach Kirby Smart and the Bulldogs are ready to throw it out the window and move on.

During Monday’s press conference, Smart addressed the media as the team begins preparation for Saturday’s home game against Nicholls State. As another week begins for the Bulldogs, here are three storylines of Smart’s presser.

Quarterback plan to remain the same as previous week

Georgia had a performance from freshman Jacob Eason in the season opener that raised some eyebrows, so the question remains to be if he will start each game. As many anticipate Eason will take the first snap behind center for Georgia’s upcoming home opener, Smart said the coaching staff will implement the same thorough process, just as they did last week.

Smart indicates that both quarterbacks utilize their skill sets well, and that they’re both beneficial to the team.

“We’re trying to get the best unit we can get out there,” Smart said. We’re trying to do what each one of these quarterbacks can do. The quarterback plan is very similar to last week right now. We’re going to continue to rep both of those guys, give those guys a lot of work, and make a decision as to what we’re going to do, whether it’s later in the week, or game time.

Eason went 8-12 in the season opener, and threw for 131 yards. The home opener against Nicholls State could serve as an opportunity for the freshman to get more exposure, in a situation of less pressure. But as the coaching staff clearly states their interest in Lambert and his game-managing skills, it seems likely that he would receive another start.

Smart had a response during Monday’s media session that resembled his former boss at Alabama, Nick Saban. After Georgia had a solid win against a ranked opponent in North Carolina, he cites that the team has many issues and needs to improve during practice sessions.

Georgia’s head coach cited issues with special teams after the 33-24 victory, but after watching the tape, he took his desire for improvement a little deeper.

“Everywhere. I’m serious. Anywhere,” Smart said. “It didn’t matter if it was protections, running back protections, o-line protections, more physical at the point of attack, ID’ing the “Mike” (linebacker), defensive line running to the ball, pass rush, secondary leveraging the ball, linebackers keying things properly, punters kicking the ball where they’re supposed to kick it, it really didn’t matter. We’ve all got a lot of improving to do.”

Most of his negative remarks were pointed towards the defense, and that’s no surprise after being a defensive coordinator for the last nine seasons. North Carolina broke open a few large runs during Saturday’s game, especially senior T.J. Logan. Smart voiced his displeasure with the run defense, and looks to clean that issue up.

“We’ve got to play with better technique,” Smart said. “We’ve got to tackle better. It’s always your fear the first game that you don’t tackle well. That’s exactly what it was. We did not tackle well, especially on the edges and the perimeter. We’ve got to put those kids in those situations. It’s like that first scrimmage where you go in and you tackle live, and you worry you’ll have a lot of missed tackles. We didn’t have a lot of them but we weren’t tackling Sony (Michel), he wasn’t out there. Nick (Chubb) was getting limited reps. Brian Herrien had a pretty good scrimmage, he was similar to Logan. It showed up. We did not tackle where we need to tackle to play well on defense. We’ve got to address that and improve on it.”

“It shows that these kids will never quit,” Smart said after the Chick-Fil-A Kickoff Game. “They’ve got to push. It’s going to happen again. Teams, especially in our league, are really good teams, so we’re going to have those situations come up. Sure, we want to build on it, but we’ve got to be careful, too. This is one game, and we can’t fall into that trap.”

Georgia played junior fullback Christian Payne frequently during the season opener, especially when they used Chubb and the host of running backs. Smart seemed pleased with his efforts, and named him offensive player of the week.

It seems as if he will continue to see action throughout the season if continues to throw second-level defenders to the ground as he did this past Saturday.

Smart said back at an alumni gathering that he “wasn’t a fullback guy.” Payne wasn’t too pleased with the comment, and Smart said he went out to prove himself.

“A while back when I said we didn’t use fullbacks he was mad at me, so he took it out on me during the game,” Smart said. It was good you noticed that because we think a lot of him. He practices really hard and gets no credit. I’m glad you noticed it because he really played well, he played physical, he did a lot of good things on tape. He does that every day so it’s no surprise to me. But he does have great value in this offense with what he does, and he’s done a good job for us. He’s a really competitive, tough guy.”

Payne didn’t take the comment personally, however. He stated a desire to get better and help the team.

“I don’t try to look into that much,” Payne said. “I’m just here to do my best and work as hard as possible and just help the team to win. It’s nothing personal about those comments. It’s just to work and go out there and do my best. It gives you confidence as a player that you’re going to be included in the game plan.”

Quotes from Monday’s press conference were obtained from Georgia Sports Communications. The transcript can be found here.