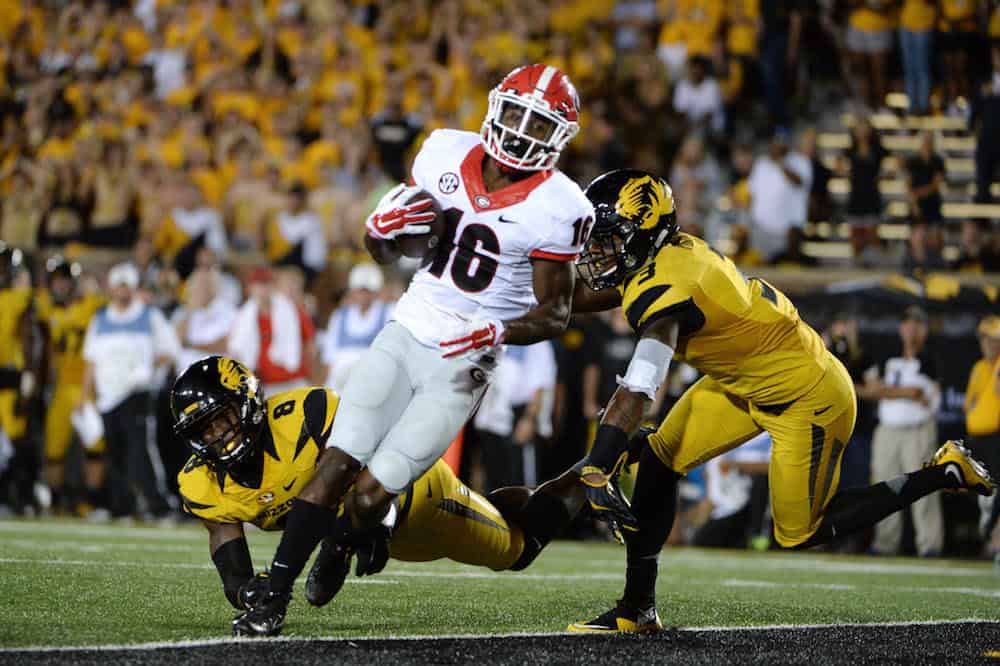 Georgia looked down and out of life after the Bulldogs had two special teams blunders in which they failed to take advantage of opportunities, but the Bulldogs were able to prevail to win 28-27 over Missouri.

In the first half, Georgia was clicking on all cylinders in the passing game and tallied 21 points. Jacob Eason showed his potential and led the Bulldogs’ offense with two passing touchdowns.

Georgia’s defense couldn’t make immediate adjustments as they allowed 20 points and Missouri quarterback Drew Lock was picking the Bulldogs’ secondary apart. But in the second half things changed, as both defenses locked down and Georgia had many opportunities and couldn’t capitalize.

Lock threw three interceptions in the second half, and Georgia was primed to produce offensively. However, that wasn’t the case as dropped passes by Michael Chigbu, Isaiah McKenzie (who ended up being the game’s hero), Reggie Davis and two missed chip shot field goals by kicker William Ham were almost costly for the Bulldogs.

The kicking woes are of importance for Georgia, and head coach Kirby Smart debated making a change on the last field goal attempt to allow Rodrigo Blankenship to have a chance. But the staff went back to Ham and it didn’t turn out as planned for Georgia.

Smart gave his place kickers a challenge after the two missed field goals and an inability for both Ham and Blankenship to find the end zone. Smart said his guys have to get some confidence, then he believes things could improve.

However, Georgia was able to make a final defensive stand and took over possession with just over four minutes remaining in regulation. Jacob Eason, the Bulldogs freshman signal caller, was trusted with leading the comeback and did just that. He was able to connect with Jeb Blazevich, McKenzie and a 15-yard pass interference call on an attempted strike to Reggie Davis set up the stage nicely for Eason to connect with Georgia’s offensive focal point McKenzie for 20-yards on a fourth down, when the Bulldogs were down to their last hope.

McKenzie illustrated the play, and credited his quarterback for his crisp passing.

“I had a visual before the play started,” McKenzie told reporters after the victory. “The linebacker came up, and I knew I had to beat the corner before he beat me to the middle. Jacob threw a great ball, I adjusted to it and came down with the catch.”

Eason finished with 308 yards and a touchdown, finishing 29-55 with an interception. Georgia’s leading receiver McKenzie finished with 122 yards on ten receptions (17 targets) and three total touchdowns, and further proves that he is the Bulldogs best option and offensive playmaker.

Aside from McKenzie saving the offense with receptions at a much needed time, Eason came into his own during his first road game. He had composure throughout the game, and was big in leading the Bulldogs. It’s safe to say that the Eason era has arrived, and Georgia running back Nick Chubb, who tallied only 64 yards on 19 carries, credited the freshman’s efforts.

“That kid’s amazing,” Chubb said. “He’s a young guy. Eighteen-year-old kid, and he came in here and won the game for us.”

Smart was also asked about Eason’s progressions and he seemed pleased.

By all indications, Eason looks as if he will remain the starting quarterback for quite a while, but Smart got a bit snappy with reporters when they inquired on the situation, seeming annoyed with the frequent interrogation.

Georgia had to halt the excitement after taking the lead on the dramatic touchdown drive, as they had to make one last defensive stand. Bulldogs cornerback Juwuan Briscoe was able to recover a fumble after a strip by Dominick Sanders on what would have been a 20-yard gain on a completion to J’Mon Moore.

The Tigers leading wide receiver Moore had Georgia’s number, amassing 196 yards and two touchdowns, burning Briscoe and the Bulldogs secondary but the leading cornerback was able to redeem himself.

Briscoe had a rollercoaster type of night, being burnt on five different occasions as previously mentioned. But Briscoe believes that confidence drove him to finish strong.

“It frustrated me,” Briscoe said. “But my teammates and my coaches, they believed in me. I had to keep fighting for them.”

All in all, Smart and his team were able to scratch out their first conference victory on the road in quite dramatic fashion. But the Bulldogs have plenty to improve on heading into a match-up against a top-tier opponent.

Next: Georgia (3-0, 1-0 SEC) travels to Mississippi (1-2, 0-1 SEC) in another conference showdown. The game will take place on Saturday, September 24 at noon, televised on ESPN.