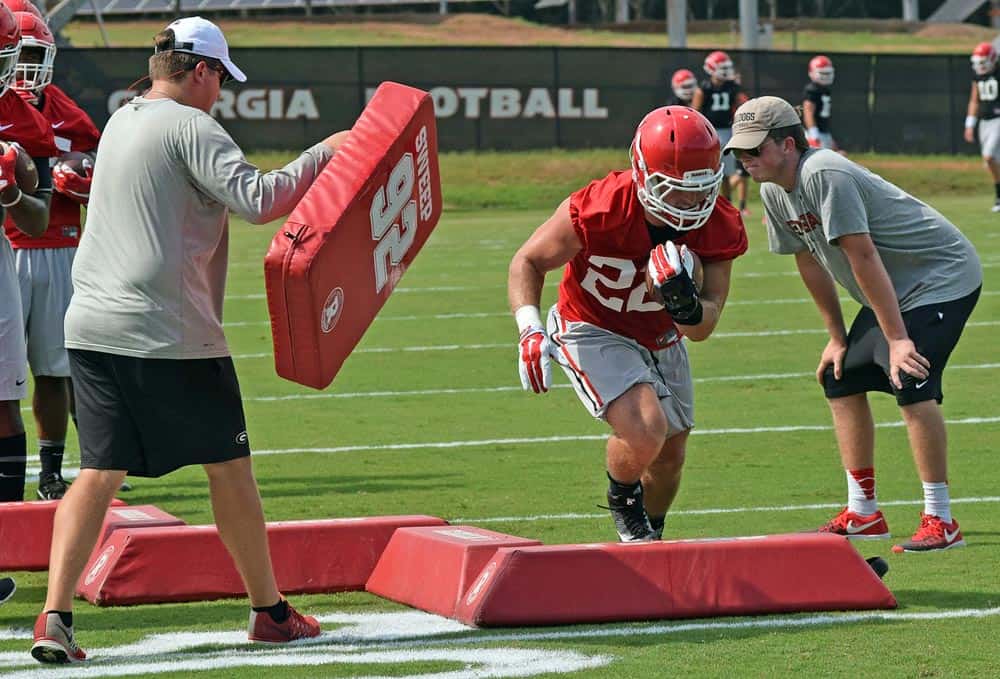 Only nine days remain until Georgia takes the field to open the season against North Carolina at the Georgia Dome. But a few things are still up in the air, while some issues have been resolved.

As Georgia finishes its last week of preseason camp and begins preparation for the Tar Heels, here are some things of note.

Chubb “in line” to get playing time in opener, maybe not for Michel

After Wednesday’s practice, Georgia head coach Kirby Smart took the podium to address the media. He was asked about freshman Brian Herrien in regards to if he was slated to get playing time. His response included all of the running backs of decent health, stating they could all see the field.

Although Smart’s response was intended to not exclude the freshman, junior running back Sony Michel was omitted from his response, as his playing status is still undetermined and the coaching staff awaits clearance from medical team.

“I don’t know if he can play or not,” Smart said. “If he can play he’ll definitely be in line. He’ll be one of the first ones in line. But he’s got to be cleared before I can do that.”

Georgia certainly hopes for Michel’s talents to be at their disposal for the season opener, and that will remain to be seen.

Another thing of note is the potential of Chubb seeing playing time, as Smart indicated to in his response on running backs. Smart simply said Chubb is in line to get playing time during next Saturday’s opener. In no way did Smart say that Chubb will definitely play, as there could be a setback in the coming days leading to kickoff. Those who have said that a report was released that Chubb would play may want to proceed with caution on this matter.

Therefore on a personal note, while I expect Chubb to have action, Smart did not confirm or report that information in Wednesday’s press conference. He has simply stated that Chubb is in position due to his ability to do everything asked throughout preseason camp.

During Thursday’s practice, Chubb was seen practicing without a knee brace for the first time since sustaining his injury last October, according to Jason Butt of The Telegraph.

A leader emerges at punter

While many position battles are still unresolved at this point, it looks as if Georgia has a bit of clarity on one of them.

Marshall Long, a freshman out of China Grove, N.C., has emerged as the leader at the punter position. Long has been competing with Brice Ramsey, who saw time at the position last season, but has also been involved in the three-man quarterback race this offseason.

“Right now at punter Marshall’s probably done the best job,” Smart said. “But it’s not over until it’s over. So we’ll see. Brice continues to work. Brice has got a really fast operation and he’s done a good job of getting the ball off here in the past.”

Long has certainly shown Georgia he has the leg both in preseason camp and especially in high school, as he recorded a 75-yard punt back in his prep days at South Rowan.

The kicker situation however is still unresolved. It’s currently a two-man battle between redshirt sophomore William Ham and redshirt freshman Rodrigo Blankenship. A walk-on from the most recent recruiting class, kicker Mitchell Wasson, currently doesn’t seem to have a chance to win the job. Wasson wasn’t able to join camp until the first day of classes, which was August 15.

“The kicker thing hasn’t played itself out there,” Smart said. “We’ve got both guys battling there.”

Wide receivers to play “by committee”

Georgia will be diverse in their use of wide receivers this season, by the way Smart has described it.

The assumption was that no receiver would jump out during preseason camp, and that’s definitely the case. As the Bulldogs try to replace the production of Malcolm Mitchell, a player which was frequently targeted, they will do so by implementing a host of different pass catchers into the offensive game-plan.

“You know I think it’s going to have to be by committee,” Smart said. “The leadership comes from Reggie (Davis) and Isaiah (McKenzie). How they go is kind of how the whole group goes. Both of those guys compete hard and practice the right way. But when it comes to production, I think it’s going to come from everybody.”

McKenzie and Davis both had significant roles on the team last season, but sophomore Terry Godwin should be planned to receive the heaviest workload.

Past those three wideouts, Georgia will depend on underclassmen who are just entering the program or who have yet to receive significant roles on the team in previous situations. The Bulldogs have many options to pick and choose from, but a lack of experience and not knowing who to consistently rely on could be an issue for Georgia.

“(Michael) Chigbu has done a good job. (Jayson) Stanley had a good last scrimmage. He blocked well and has done the things we’ve asked him to do,” Smart said. “Riley Ridley’s a guy who gives you great effort every play out there and gives you all he can. Even Javon Wims has come along. Tyler Simmons has had some good days. It’s gonna be a group that does it by committee, I’m afraid. Nobody has jumped out there.”

Georgia could be getting closer to full health at the right time, after players were sustaining injuries frequently in the early stages of camp.

Most notably, freshman Elijah Holyfield sustained a low ankle sprain during last Saturday’s scrimmage, as Smart confirmed our report on the extent of the injury. According to the same report by The Telegraph, Holyfield was seen on a stationary bike in full pads during Thursday’s practice and catching passes while pedaling. Holyfield is expected to continue practicing later this week.

In other injury news, the only players seen in a non-contact jersey were freshman offensive lineman Sam Madden (mononucleosis) and Sony Michel (arm).

Juwan Briscoe (shoulder) was a full-go in practice for the second consecutive day after being limited for an extensive period of time due to precautionary reasons. Other players which were practicing in contact jerseys with their position groups include defensive lineman John Atkins (hyperextended knee), safety Quincy Mauger (ankle) and tight end Charlie Woerner, who was also sidelined with an ankle injury.

The full press conference from Wednesday’s post-practice availability can be found below, courtesy of UGASports.com.