Nick Chubb talks to the media after third practice

Nick Chubb talks to the media after third practice 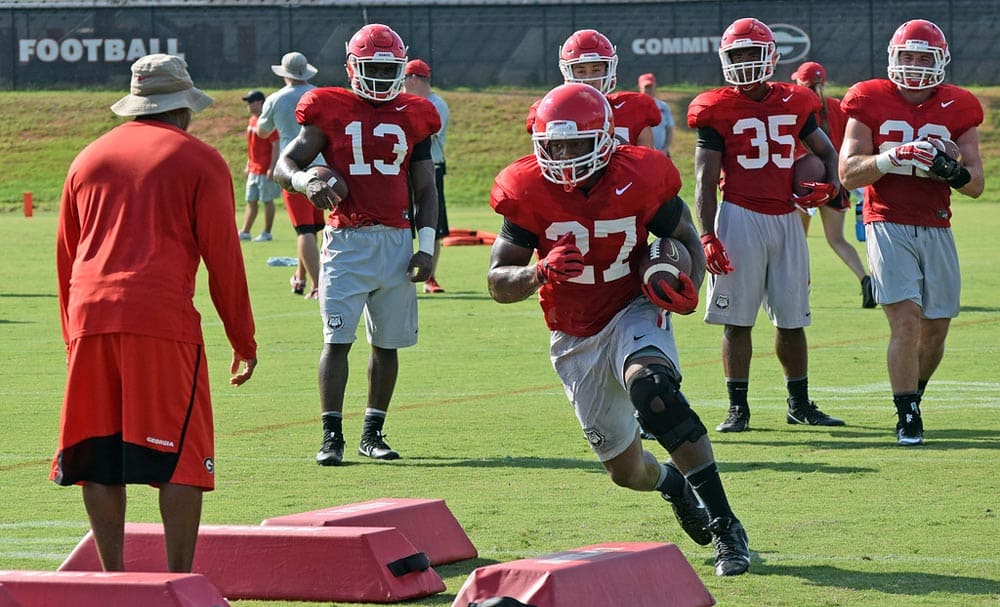 The Georgia Bulldogs worked out for two hours Wednesday in shorts and shoulder pads, marking the third session of their pre-season football practices.

After practice, selected offensive players including junior tailback Nick Chubb visited with the media to discuss how camp is progressing.

“I feel good; it’s been a long journey and I’m taking it day by day,” said Chubb. “I’ve been working hard with a lot of people behind me including my teammates. Whatever coach tells me, I’ll do, and I’ll be ready. (Senior Associate Athletic Director/Sports Medicine) Ron (Courson) has been incredible through the physical and mental part to help me through this.”

Chubb also praised former Bulldog tailback Todd Gurley in serving as a resource after he overcame a knee injury during his final year at Georgia. Gurley posted an impressive debut in 2015, earning NFL Offensive Rookie of the Year honors with the St. Louis Rams along with a trip to the Pro Bowl. Chubb injured his knee against Tennessee last year and was lost for the season. In six games last year, he managed to tally 747 rushing yards and seven touchdowns.

“Todd’s always been there for me,” Chubb added. “He said to trust the knee. He had a good surgery and rehab, and seeing what he’s been able to do, that gives me a lot of motivation. I want to follow in his footsteps and be back.”

Senior offensive lineman Greg Pyke said Chubb is a hard worker, and he’s seen it firsthand in the weight room, training room and now back on the practice field.

“Nick fights for those extra yards, and he makes me play harder seeing the way he plays,” said Pyke. “It’s great to see him out there again practicing.”

The Bulldogs will continue pre-season practice Thursday. They’ll have an open practice this Saturday to kick off the 2016 Fan Day celebration at Sanford Stadium.

Georgia begins the 2016 season on Sat., Sept. 3 against North Carolina in the Chick-fil-A Kickoff Classic in Atlanta. Kickoff is schedule for 5:30 p.m. (EDT).