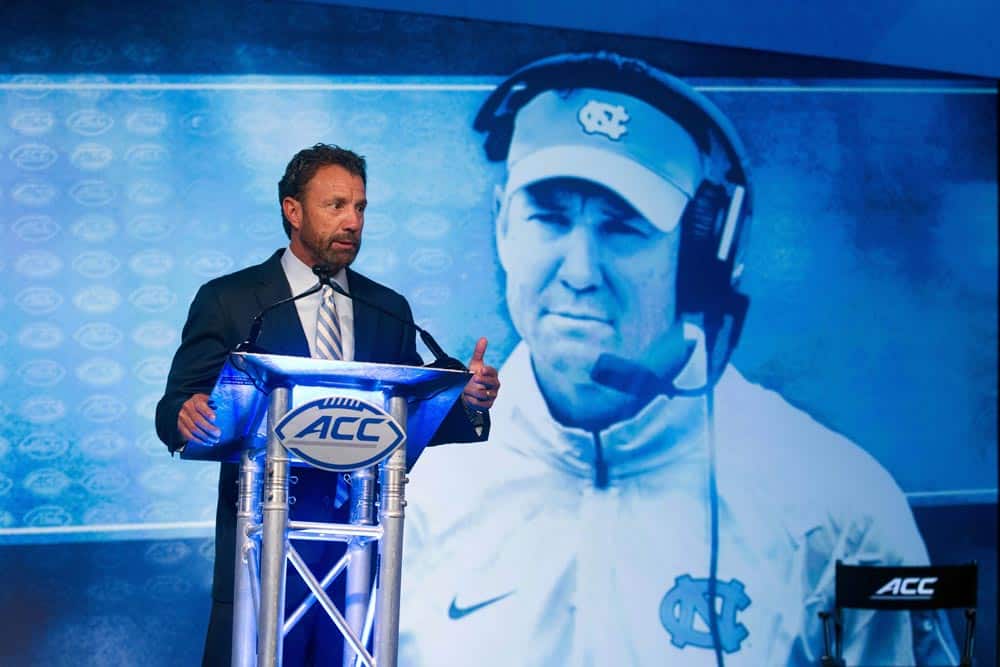 Only six Saturday’s remain until both Georgia and North Carolina take the field for the anticipated showdown in Atlanta on September 3.

Kirby Smart of Georgia and Larry Fedora of North Carolina discussed preparation for the game at their conference’s media event, as well as the impact it would have on the season. The anticipation is evident throughout both fanbases, and the team has excitement to hit the field as well.

Smart, entering his first test at Georgia, said he would rather play a premier opponent to kickoff the season.

“It’s always better to play a quality opponent, because you find out more about your team,” Smart said. “The College Football Playoff has made it a lot less crucial that you have to win that (opening) game. Before, if you lost that game you could be out. Now, … you have to be in the right place, but that opener is not as critical.”

Although the impact isn’t as huge in terms of a season’s outcome and the plan is to look “long-term,” he still believes the game is vital in terms of igniting a flame for success in 2016.

“It’s not to downplay it, the game is huge for us as it creates momentum and confidence,” Smart said. “We’ve got a great challenge on our hands now. A lot of people don’t realize that UNC was No. 1 in that conference last year (in scoring offense) over a pretty good team (Clemson) the University of Alabama played at the end of the year. I’ve got a lot of respect for coach Fedora and the job he does.”

Fedora, entering his fourth season in Chapel Hill, echoes similar respects for Smart and Georgia’s program as a whole. Despite numerous questions surrounding the program, including the newest conflict at running back, he believes Georgia has depth and talent to put up a fight regardless of who takes the field.

“Everybody knows the tradition of their team,” Fedora said. “All they do is win at least 10 games a year. In the recruiting rankings they’re in the top 10 every single year. They’ve got great players in every single position, whether it’s Nick Chubb, Sony Michel, whoever they have in their stable, I promise you they’re going to have a dang good running back.”

Georgia’s big question is the quarterback position, with three men battling for the job heading into fall practice. Fedora believes Smart will put his team in the right place in terms of who steps behind center. Nonetheless, he shines respect for Georgia’s new head man.

“They don’t know who the quarterback is going to be, but we know it’s going to be a good one,” Fedora said. “Kirby Smart is a helluva football coach. He’s put together a great staff. They have the support that they need to be successful.”

North Carolina, normally as a mid-tier ACC football program, doesn’t have an opportunity to play on the big stage very often. After an ACC Championship appearance in 2015, they will receive their chance as a reward to open 2016.

The Tar Heels will also bring a new man behind center, Mitch Trubisky, who will make his first start after the departure of Marquise Williams. Fedora believes the adrenaline will be flowing, and a new quarterback won’t be an issue. Similarly to the words of Kirby Smart, Fedora and his crew believe the showdown will have quite an impact on their season as a whole.

“It’s excitement of playing a game of that magnitude, because the guys don’t look at it as, ‘What does this do for our program?’” Fedora said. “They dream when they’re kids — and they’re playing in the backyard — they dream of playing in games like this. You want to play against great talent and in great atmospheres. They’re excited about it. This is what they dream of doing.”