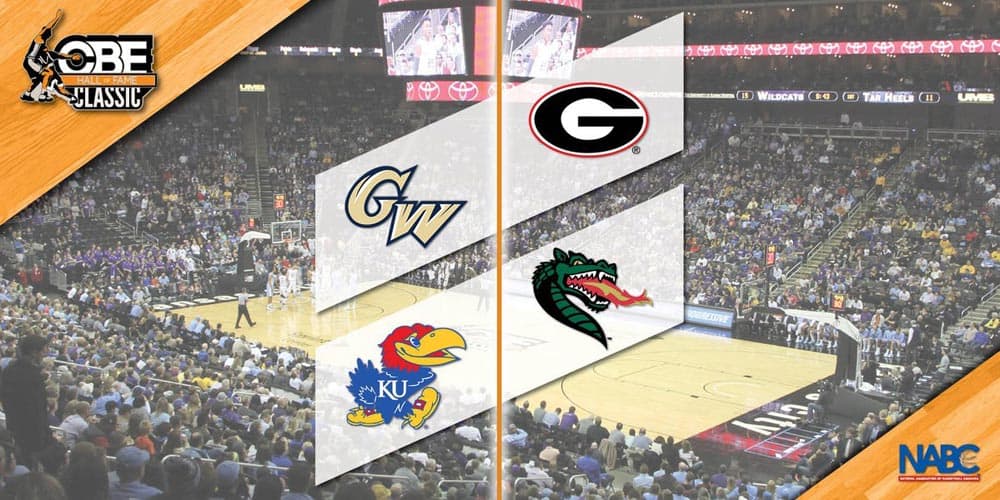 The dates and matchups for Georgia’s four games in the 2016 CBE Hall of Fame Classic were announced Wednesday by the National Association of Basketball Coaches. The Bulldogs will host two games in Athens on Nov. 14 and Nov. 17, before competing in the championship rounds on Nov. 21-22.

Georgia will face George Washington on Monday, Nov. 21 at 7 p.m. ET on ESPNU in the championship rounds’ first semifinal at the Sprint Center in Kansas City, Missouri. Kansas will take on on UAB in the second semifinal that evening. The following day, the consolation game will be at 7:30 p.m. ET on espn3, with the championship contest following on ESPN2.

The CBE Hall of Fame Classic will be the culminating event of college basketball’s Hall of Fame Weekend, which also includes the 11th annual induction ceremony for the National Collegiate Basketball Hall of Fame on Friday, Nov. 18. Georgia Basketball legends Hugh Durham and Dominique Wilkins are among the Hall of Fame’s Class of 2016 inductees.

Durham is Georgia’s winningest coach ever, with 297 victories from 1978-95. He led Georgia to several historic firsts, including the NCAA Final Four in 1983, the SEC Tournament title in 1983 and the SEC Championship in 1990. After not reaching postseason play during the program’s first 73 season, Georgia made 11 appearances in the NCAA Tournament and NIT over his 17 campaigns in Athens. All told, Durham posted 633 career victories at Florida State, Georgia and Jacksonville.

Wilkins, who was inducted into the Naismith Memorial Basketball Hall of Fame in 2006, arrived in Athens prior to Durham’s second season and helped Georgia Basketball garner national attention. He was named SEC Player of the Year and MVP of the SEC Tournament in 1981. Wilkins was a consensus All-America pick in 1982 before embarking on a 15-season career in the NBA, primarily with the Atlanta Hawks.

Tickets for both the Hall of Fame induction ceremonies and Classic’s championship rounds will go on sale on August 6.

In addition, donations to the UGA Athletic Association’s Basketball Enhancement Fund (BEF) are currently being accepted in association with the 2016-17 season. The deadline for donations for the upcoming season is August 1.

The minimum donation to purchase renewable season tickets is $150 per seat. A gift of $150 also will be recognized with a car decal and an invitation to a designated preseason practice of the Bulldogs. Varying levels of BEF donations are used to determine ability to purchase premium courtside seating, as well as tickets to the SEC and NCAA Tournaments. Additional potential benefits associated with contribution levels include reserved parking at Stegeman Coliseum, invitations to the team’s preseason and postseason banquets and pre- and in-game hospitality.