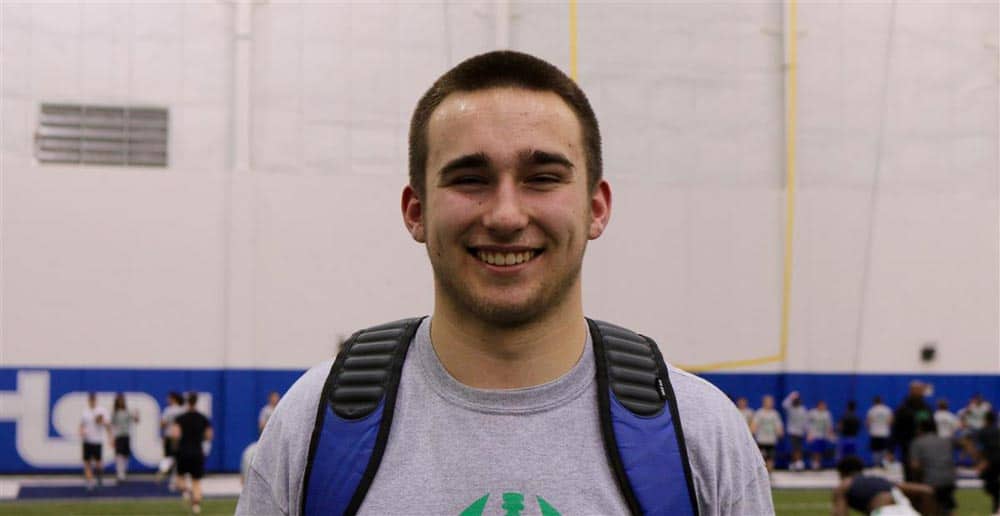 Georgia and Kirby Smart were full throttle in terms of recruiting for the upcoming signing class, however the more distant future is always in prospective. Luckily for Georgia, that search started off with a bang as a highly sought after recruit landed into their hands.

For Max Wray, the four-star offensive lineman out of Franklin, Tennessee, the desire to be first was definitely evident.

“I wanted to be leader of the class and wanted to be able to set myself apart from everyone else in my class,” Wray told SicEmDawgs.com. “(Also), I wanted to help build a relationship with the coaches and help them however I can.”

The quality of being fast-acting is definitely admired as Wray was the first recruit to announce his commitment for the 2018 class, and one that can help serve as a bar setter and a big help to the program before he even touches the field.

As he committed on March 31st, he gave his verbal announcement just in time to see what things would shape up to be for the G-Day Spring Game on April 16th. Wray had the same notion as the majority, and didn’t expect the atmosphere it came to be.

“I showed up and Sanford was about half full but the people kept coming,” Wray exclaimed. “I looked up and thought ‘Whoa, the whole stadium is packed.’ I thought (Georgia) was going to get around 80,000 but 95,000 or more is just crazy. I loved it and had a great time talking to recruits and seeing the coaches in action.”

While setting himself apart from everyone, he also hopes to lure some fellow classmates to Georgia along with him.

“My top targets (to help recruit) right now are Trevor Lawrence, Justin Mascoll, Christian Tutt, Jamaree Sayler and Zamir White,” Wray said as he spoke about who he hopes can join him.

Along with William Poole and Richard LeCounte in the 2017 class who serve as big-time recruiters for Smart’s program, Wray seems to have that same type of mentality and will be beneficial to Georgia in the regard of luring more top-tier talent to strap on the red and black.

Wray also elaborated on why he chose Georgia among his hometown Tennessee Volunteers, and a lot of that had to do with where the Bulldog program is headed, especially the mentality of his position coach, Sam Pittman.

“(Pittman’s) vision of the offensive line is to get the best players and dominate the opposing defensive line on every play,” Wray continued. “(As a program), I feel like the ‘new era’ of Georgia Football (will focus upon) being national championship contenders in the future. It will be something amazing.”

The record-setting work done by the coaches in terms of the 2016 and 2017 class is definitely recognizable. In addition to that, the experience of each of the coaches under the umbrella of Kirby Smart leads many to believe, including Wray, that the program will soon be on the up-rise to legitimate contention.

The vision of Georgia athletically played a big role in the stability of his commitment, the academic prestige entailed in the University of Georgia was an evident factor for Wray’s decision.

“(Georgia) offers a pre-physical therapy program, which is the field I want to major in,” Wray responded when asked if the offer received by Alabama may have wavered his commitment. “Georgia also feels like home to me, and I didn’t get the feeling at any other school like I did at Georgia.”

Bulldog fans may have gotten a recruit who could be beneficial to success for many years, as his leadership qualities and professionalism are there. In addition, his loyalty to the university and the lack of attraction to any other top-tier program shows that Georgia has gotten themselves a special player.