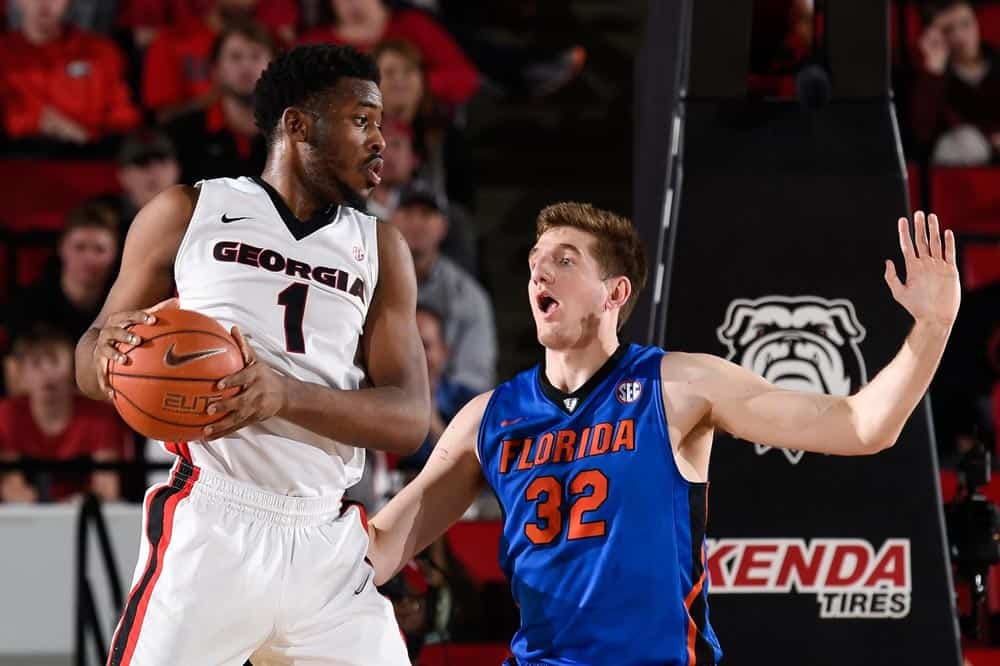 Despite a late second-half rally, the Georgia men’s basketball team fell to the Florida Gators, 57-53, Tuesday night at Stegemen Coliseum.

UGA was led by Kenny Gaines, with 12 points, followed by Yante Maten and J.J. Frazier, with 11 and 10 points, respectively.

“It was a hard-fought game,” head coach Mark Fox said. “It was a tough defeat. Florida’s kids played hard and our kids played hard. It was certainly a disappointing loss. One of the things that we have been able to do is get to the free throw line. We didn’t get to the one-and-one in either half. That made it hard for us.”

The Bulldogs came out hot, hitting two three-pointers in the first five minutes, but it was the down-low play of freshman Derek Ogbeide that highlighted the first half. The Atlanta native used crafty footwork to score six points for the Bulldogs. Georgia rode its hot-shooting into halftime, going on a 7-1 run to end the period. J.J. Frazier drilled a long fade away jumper to put the Bulldogs up 25-19 heading into the locker rooms. Georgia held the Gators to just 24.1-percent shooting from the field in the half.

Florida was first out of the gates, scoring on back-to-back possessions, but Ogbeide quickly answered with a basket of his own. Georgia buckled down on defense holding the Gators scoreless on their next three possessions, while the Bulldogs got baskets from Frazier and Maten to take a seven-point lead with 15 minutes to go. The Gators answered with an 8-0 run taking the lead at 34-33 with over 10 minutes to go.

The final nine minutes of the contest were back and forth with several exchanges of the lead. Georgia grabbed some momentum during a 6-0 run that was capped off by a layup from Maten, but Florida quickly answered with a free throw and a bucket. Senior Kenny Gaines buried a contested three-pointer to tie things up at 47-47 with 3:49 remaining. The Gators scored the next five points, but Gaines hit two three-pointers to give the Bulldogs a chance. Florida hit its free throws down the stretch to ensure the victory.

The Bulldogs hit the road on Saturday to Nashville, Tennessee to face Vanderbilt at 12 p.m. ET. The game will be shown on ESPN2.

• A hard-fought contest, the Bulldogs and Gators exchanged the lead 10 times in addition to four ties in the game.
• The Bulldogs fell despite outrebounding their opponent for just the second time this season. Georgia is now 11-2 in such games.
• Georgia shot a season-low eight free throws in the game, making five.
• Florida’s 57 points represented its second-fewest total in a conference game this season (55 vs. Alabama). Georgia held the Gators to their fifth-lowest field goal percentage for a game this season (36.4 percent) and their lowest in a win.
• Yante Maten’s 3 at 3:46 of the first half was his second career trey. His previous make from beyond the arc came against Ole Miss on Jan. 9. He had not attempted any 3s since that make.
• Derek Ogbeide registered six first-half points, his highest mark in any half in his career.
• The Bulldogs held Florida to just 24.1-percent shooting on 7-for-29 from the field in the opening frame, its second-lowest percentage for a half this season (7-for-33 in first half at Vanderbilt). The visiting squad closed the first half on a 2-for-17 shooting stretch including zero for their last 11.
• Of Kenny Gaines’ 12 points, nine came from 3s in the final 3:49. He scored all of Georgia’s points in that stretch.Gaines finished just a rebound shy of a double-double in the contest.
• With four treys in the contest, Gaines surpassed Bernard Davis to claim seventh place all-time for made 3s at UGA.Gaines now has 187 for his career.

On his offensive performance…
“Personally, I know I wasn’t finishing plays at a high rate tonight. I contribute that to their defense, but it was also me. I could have went up stronger. They were double teaming me so I thought I had to make a move quicker. It just came down to decision making.”

On Coach Fox’s message to the team…
“He talked to us and he spoke to us before the game and at half time, and he told us what we needed to do and how we needed to impose effort and intensity into this team so something like what happened wouldn’t, but it did happen. It definitely took a toll on him like it always does, but this one particularly.”

On his effort on the glass…
“I’m just trying to get into a rhythm and pick it up some more and help my team the best I can. I don’t want to say I did all I could do, because I always think I can do more. If I did, we probably would have won or at least had a better shot or a closer game. I guess I just have to pick it up some more.”

On team’s defensive effort…
“That’s the way it should be. That’s how you should play. You can’t rely on having to see the ball go through the basket to play hard…we’ve struggled a lot of this year offensively. We ride Dorian Finney-Smith with the experience that he’s got, but we don’t have a bunch of experienced scorers. We’ve tried to do it by committee, we’ve tried to do it with our defensive and we’ve tried to be as good defensively as we possibly can be. In the past two-to-three weeks we haven’t been quite as good as we are capable of being defensively.”

On the impact of tonight’s win…
“We really needed this win. It was a good win for us. We couldn’t rely on our shooting to win this game, but defensively we did a good job locking down and staying focused.”