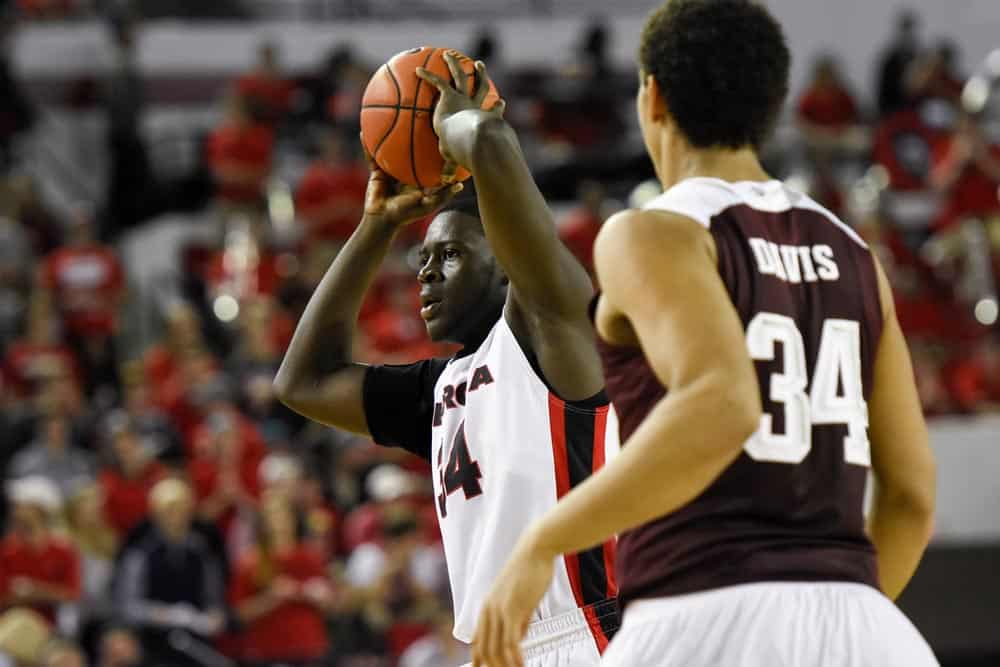 The win marks the Bulldogs’ first-ever loss to the Aggies. Georgia now holds a 4-1 all time record advantage against Texas A&M and a 2-1 nod in games played in Athens.

Maten finished the day with 11 points and six rebounds marking the sixth straight game he has scored in double digits and the 11th in his last 12 games.

“I felt like we practiced well yesterday and had a good shoot around this morning,” head coach Mark Fox said. “We didn’t have everybody attached and we ran into a very good team and we weren’t able to respond to adversity out of the gate very well. After the first timeout they were on pace to break 100 and you can’t win like that.”

The first half belonged to the Aggies as Texas A&M jumped out to an early 17-7 lead seven minutes into the contest. Georgia was unable to get anything going early as the Aggies had an answer for each of its runs. Texas A&M ended the half shooting 50-percent from the field including five for ten from the three-point line. Georgia couldn’t find its shot in the initial 20 minutes shooting just 27.6-percent from the field. The Aggies took a 38-23 lead into the break.

The Aggies controlled most of the second half despite several UGA comeback attempts. The Bulldogs were able to cut the Aggies’ lead to 42-29 three minutes into the half, but Texas A&M answered with a 16-5 run over the course of the next ten minutes. Georgia finished the game shooting 29.2-percent from the field in the second half, but allowed the Aggies to shoot 56-percent.

The Bulldogs hit the road on Wednesday traveling to Columbia, Missouri to take on the Missouri Tigers at 7 p.m. ET. The game will be televised on the SEC Network.

• The loss was Georgia’s first ever to Texas A&M. Georgia previously led 4-0 overall and 2-0 at home in the series that began when the Aggies joined the SEC.
• Georgia’s 28.3-percent shooting mark was its lowest of the season.
• Texas A&M’s .527 clip from the field was the best shooting performance by a Bulldog opponent this season.
• Jalen Jones (12 points, 12 rebounds) became the fourth player on the year to register a double-double against the Bulldogs. All four have been in conference play.
• Georgia’s 23 first-half points was the lowest mark on the season in the opening 20 minutes. The 22 points in the second period represented the second-lowest second-half output on the year (16 vs. High Point).
• The 45 total points was the lowest score for Georgia since falling 52-45 to Alabama on Feb. 12, 2013.

• Yante Maten’s 11-point performance was his 12th double-digit scoring contest of the season and 17th of his career.

Overall thoughts on the game…
“Texas A&M just gave us an old fashioned whooping. We could not get stops. They were on pace to break 100 right out of the gate. It took us a long time to get any stability defensively and never got to a point that we could win with. Never were we able to find the ability to finish plays offensively. You combine that with not getting stops and we got whooped. Give Texas A&M credit. They are very good basketball team. They have a terrific team, but I was very disappointed in our team.”

On the turning point of the game…
“ I felt like we practiced well yesterday and had a good shoot around this morning. We didn’t have everybody attached and we ran into a very good team and we weren’t able to respond to adversity out of the gate very well. After the first timeout they were on pace to break 100 and you can’t win like that.”

On today’s game…
“We just got embarrassed. I didn’t play well, we didn’t play well as a team, and Texas A&M just came in and embarrassed us at home. We had a good week of practice, we just couldn’t execute offensively, we couldn’t make plays defensively. That happens when you play a top-25 team in the country. If you don’t execute well, as a unit, as a team, you’re not going to win.”

On today’s game…
“I just feel like we were all trying to make an impact as best as we could. I can’t blame anyone. The shots that we usually have fall just weren’t. [The Aggies] were playing good defense, and our shots not falling, it can get a little ugly.”

On today’s game…
“I was just really, really proud of the team taking a great step. Defensively we couldn’t have played any better. I thought we took away and executed the scouting report as well as we could defensively and when you’re making shots it refuels your defense. We played about as well as we have played all season.”

On defending Georgia’s guards…
“Our seniors really set the tone defensively with limiting Gaines and Frazier and executing our scouting report. I thought we did a good job of keeping it out of Maten’s hands as much as we could. It’s just older guys believing.”

On tonight’s game…
“I was very impressed. Anytime you get to roll a big three in a big conference game it feels tremendous. I’ve gotta give a lot of credit to my team though. They went out there and played hard. I’m glad we came out with a victory tonight.”