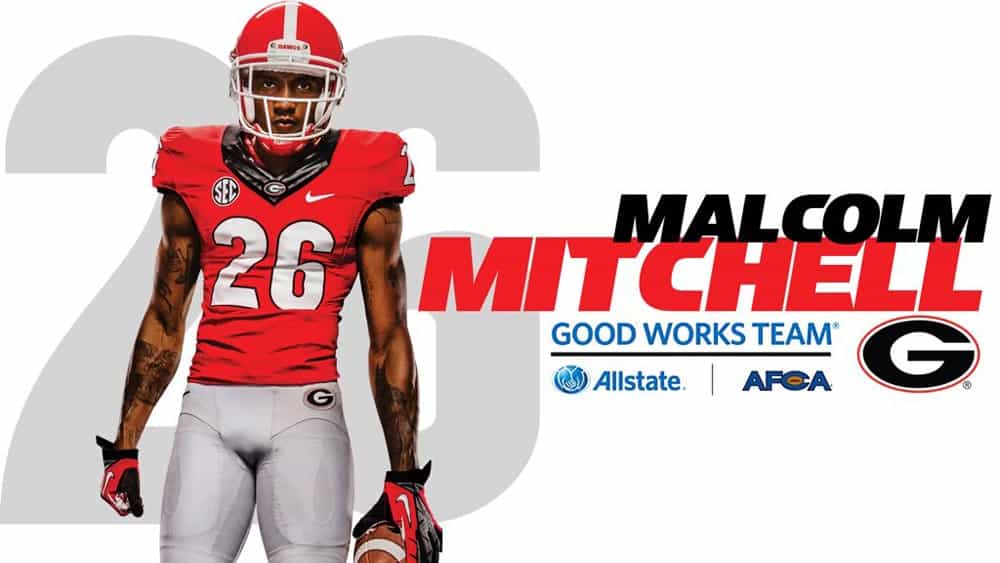 College football fans have selected University of Georgia wide receiver Malcolm Mitchell as the 2015 Allstate American Football Coaches Association (AFCA) Good Works Team® captain for his standout community service and off-the-field contributions. To celebrate his achievement, Mitchell will be recognized by Allstate Insurance Company and the AFCA during the live broadcast of The Home Depot College Football Awards airing on ESPN on December 10.

While college football players are most often celebrated for their athletic performance, the Allstate AFCA Good Works Team® honors players at all levels of the sport for their acts of service within their communities. Of the 22 team members selected each year only one player receives the title of team captain by way of fan votes on ESPN.com/Allstate.

Mitchell, who was named to the 2011 Freshman All-SEC Team and was UGA’s 2014 Comeback Player of the Year after sustaining an ACL knee injury in the 2013 season opener, earned a place on this year’s Allstate AFCA Good Works Team® for his dedication to promoting education and literacy among young people. As the founder of a children’s reading program and author of his own children’s book, Mitchell regularly visits elementary schools and reads to classrooms in the Athens, Ga. area. The Communications Studies major and Valdosta, Ga. native also volunteers his time with the Boys & Girls Club of Athens and the University of Georgia’s “Learn, Play, Excel” initiative, which teaches children about the importance of education, respecting authority and pursuing their dreams.

“Malcolm inspires children and adults alike with his passion for reading, so Allstate is thrilled to see his local community and fans across the country support his efforts with their votes,” said Thomas Clarkson, president of the west territory for Allstate Insurance Company. “We are proud to highlight the strong commitment to community service demonstrated by Malcolm and all members of this year’s Allstate AFCA Good Works Team® who work to make a difference both on and off the football field.”

Mitchell and his fellow Allstate AFCA Good Works Team® members have been invited to New Orleans where they’ll combine their passion for football and service through work with a special youth football clinic prior to the Allstate® Sugar Bowl®. Additionally, the players will be honored on the field at halftime during the nationally televised broadcast on Jan. 1, 2016.

To learn more about this year’s team members and their charitable achievements, fans can visit ESPN.com/Allstate.

The Allstate Corporation (NYSE: ALL) is the nation’s largest publicly held personal lines insurer, protecting approximately 16 million households from life’s uncertainties through auto, home, life and other insurance offered through its Allstate, Esurance, Encompass and Answer Financial brand names. Allstate is widely known through the slogan “You’re In Good Hands With Allstate®.” The Allstate brand’s network of small businesses offers auto, home, life and retirement products and services to customers in the United States and Canada. In the 20 years since Allstate became a fully independent public company, The Allstate Foundation, Allstate, its employees and agency owners have donated more than $405 million to support local communities.

The Allstate AFCA Good Works Team® was established in 1992 by the College Football Association, recognizing the extra efforts made by college football players and student support staff off the field. AFCA became the governing body of the award in 1997 and continues to honor college football players who go the extra mile for those in need. Allstate worked to present the award starting with the 2008 season.

The AFCA was founded in 1922 and currently has more than 11,000 members around the world ranging from the high school level to the professional ranks. According to its constitution, the AFCA was formed, in part, to “maintain the highest possible standards in football and in the coaching profession” and to “provide a forum for the discussion and study of all matters pertaining to football.”