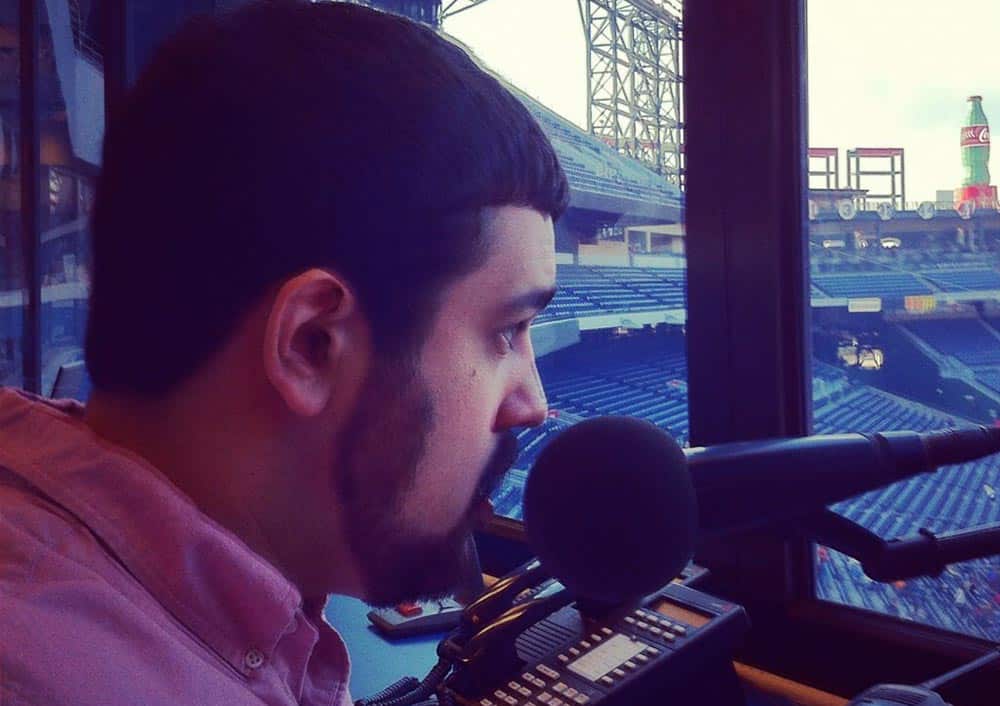 Sam Franco, the voice behind the Georgia Bulldogs basketball team. The atmosphere in Stegeman Coliseum wouldn’t be the same without his lively announcing on game days. Many may not know who Franco is and his road to becoming a Georgia PA announcer. I was able to chat with him and on how enjoys being the anonymous “voice of the Dawgs.”

Q: What was your path to becoming a PA Announcer for Georgia?

Franco: “I had been working at Cox Media Group/960 the Ref for a little over a year and a half and both the softball and tennis PA jobs came open. I was asked by some people in the UGA Athletic Department if I would like to give it a try. I did softball for a couple of years and was having a blast when the women’s basketball PA announcer position opened up. I worked with women’s basketball for a while, then the big opportunity opened up. I got a call on the morning of March 3rd, 2013. I had been doing some on the court halftime emcee stuff for the Men’s basketball team for about a year and a half. The call was from someone in Athletics and they asked if I could announce the Kentucky game that night. The PA Announcer at the time I believe got sick. And from that night on, I was the PA Announcer for the men’s basketball team.”

Q: What is it like being the anonymous voice behind the mic?

Franco: “There are a good amount of people that know me and know that I do that job, but I also realize that there are some people at the game who have no idea who I am or where the voice is coming from. I’ve always felt like my job is to be a good accompaniment to what was going on in the arena. The fans are there to cheer on the Dawgs and I’m just trying to add to the excitement and energy in the Coliseum.”

Q: What’s it been like working through the highs and lows to Georgia basketball?

Franco: “It’s funny, I was telling someone the other day that I’ve become kind of like a bear guarding it’s cubs when it comes to the basketball teams. I am so fortunate to have been given the opportunity by the University to do a job that I really truly love doing. Basketball is so great because it is a game with many ebbs and flows, and I go through all that stuff with the team. When a big moment happens, you might hear it that much more in my voice or the way I deliver Kenny Gaaaaines for threeeeeeeeeee! I’ve also been very fortunate to have been working with this team from the early stages of what Coach Fox has been building here in Athens. I really do believe that this team is on the verge of something special. Having their 2nd consecutive 20 win season last year was awesome and had it not been for injuries, that team probably could have made a little more noise at the NCAA Tournament. This season, if they get to 20 wins, it’ll be the first time in school history that Georgia has won 20 games in 3 straight seasons. To be even a tiny part of that would mean so much to me.”

Q: What has been your favorite moment in Stegeman Coliseum to this point?

Q: What are your thoughts on this upcoming season? In which ways do you see the team improving or struggling?

Franco: “As I said earlier, I really do think Coach Fox could be on the verge of something special. It’s obviously going to be tough to replace Nemi Djurisic and Marcus Thornton. Those guys were leaders both on and off the court and were terrific players. Luckily for Georgia, they are very skilled in the backcourt with Charles Mann, Kenny Gaines, and JJ Frazier. They also have big man Yante Maten going into his sophomore season and a promising class of freshmen including big man Derek Ogbeide and guard Will “Turtle” Jackson. Yante’s development from freshman to sophomore is going to be really important for this team now that Nemi and Marcus have moved on. In closing, I think we’ll see this team back in the NCAA tournament and I’m very excited for another year!”

It was certainly a pleasure to talk to Sam about Georgia basketball. Georgia tips off their season this Friday against UT-Chattanooga at Stegeman Coliseum. The hoops team has a lot of excitement around it this season, and wouldn’t be possible without Franco’s excitement and energy in Stegeman.