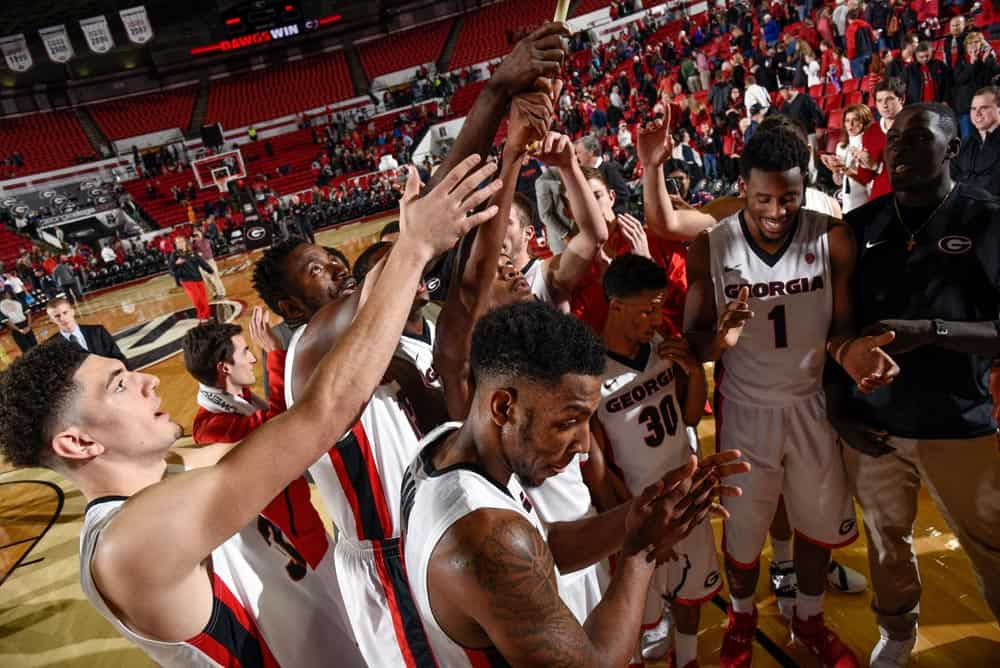 ATHENS, Ga. – Georgia’s matchup turned out just as predicted, narrowly defeating High Point 49-46.  The Dawgs were very dysfunctional at times, leading to many struggles putting points on the board and letting High Point hang around to the final buzzer. Georgia must not continue to perform this way, or they may be in deep trouble as conference play rolls around. There were a few key factors that led to the narrow defeat, some serving as an advantage while others serving as a disadvantage for Georgia.

First off, it needs to be initiated that Georgia was without two of their biggest assets which could have impacted their play. Derek Ogbeide (shoulder) and Juwan Parker (achilles) did not dress out as they are still receiving treatment. I wouldn’t expect to see either of them against Seton Hall on Saturday either. We do see progress from Ogbeide as he was not seen in a sling prior to the game against High Point.

Quite mercifully, Georgia finally got in a rhythm at the free throw stripe, shooting 85%. Their improvement at the line was surprising, as they shot under 70% in the first two games. If the offense will be out of sync at times, the players must continue this success at the line when drawing fouls in order to generate points.

Georgia simply cannot generate significant offensive production from the five men on the floor. They shot 29.5% tonight, breaking a record low which was previously 29.8% in their last game against Murray State. Along with abysmal shooting percentage numbers, Georgia only totaled 49 points, which was the lowest total recorded in the Mark Fox era.

A basketball team in pursuit of success simply cannot shoot anywhere close to under 30% from the field. Mark Fox may agree with that statement as he made a comical reference in his postgame press conference when he said, “Dr. Naismith rolled over in his grave with the way we played offensive basketball.” His statement just proves that the anemic offense isn’t just a figment of my imagination, but something that is definitely noticed and must be improved.

On the bright side for Georgia, their defense showed up in a huge way. High Point has sustained an up-tempo offense putting up a lot of points, led by forwards Lorenzo Cugini and John Brown. Those two players have scored around 20 PPG with their supporting cast having success around them. However, that was not the case tonight. Their star forwards were held just over 10 points each while their role players had a difficult time gaining any traction. If High Point were to put up significantly higher scoring totals, Georgia doesn’t come out on top. We must give props to Coach Fox’s defensive gameplan and execution by the guys on the floor which is keeping Georgia’s head above water.

We saw some good and bad from Georgia against High Point. The good was something we haven’t seen in quite some time while the bad was near abysmal. Georgia can eventually work out their deficiencies and blend them with their strengths in order to do something special this season. We must give it time as many freshmen are having to step up and make an impact.

Georgia will travel to Newark, NJ this Saturday to face Seton Hall in a hostile environment. Georgia handled the Pirates handily at Stegeman last season, but they seem to be reloaded and ready to go, making the matchup intriguing. On the injury front, it remains a waiting game to see if Ogbeide and Parker will take the floor. Georgia fans will have a day filled with the Dawgs as Georgia will face Georgia Tech in football at noon on ESPN2, then the focus shifts to the Seton Hall game at 7:30pm on Fox Sports 1.