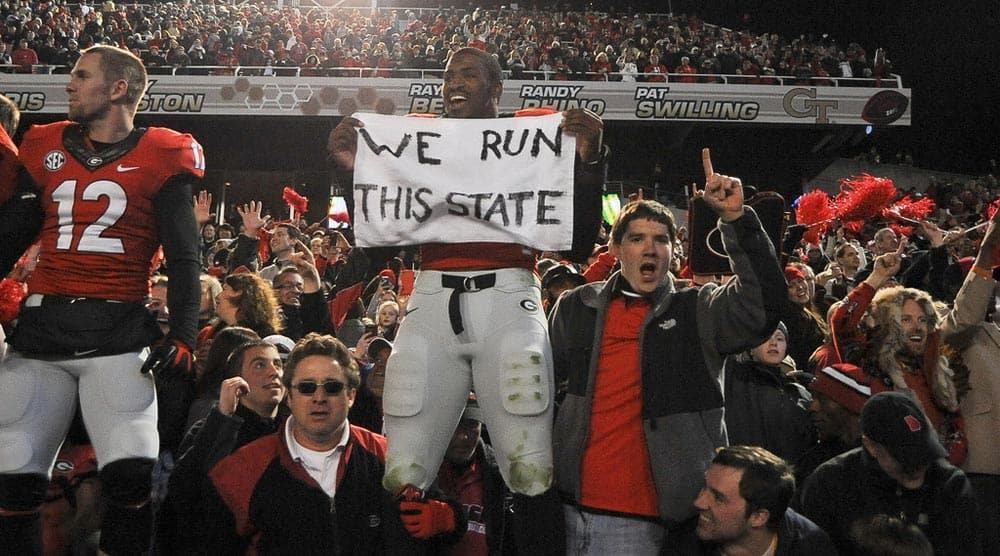 Georgia and Georgia Tech will meet for the 110th time in “Clean, Old-Fashioned Hate” in Atlanta. This series seems to be full of intrigue and bring an instant classic each year, and that was certainly the case the last time Georgia traveled to Atlanta in 2013. Let’s take a look at the miraculous comeback in 2013, led by the heroics of former Georgia running back Todd Gurley.

In the first half, it looked as if Georgia Tech was going to run away with the game and send Bulldog fans home disgusted. The Yellow Jackets jumped out to a 20-0 lead midway through the second quarter, as Georgia couldn’t stop their triple-option attack.

With less than a minute to go in the first half, that was in the process of changing. Quarterback Hutson Mason found Todd Gurley in the end zone as he dove in with one of his signature leaps, cutting the Georgia Tech lead. The Bulldogs gained some momentum going into the locker room at the half.

The third quarter was all Georgia. Kicker Marshall Morgan started it off booting one through from 40 yards out, cutting it down to a 10-point deficit. Then, one of Georgia’s most memorable plays happened with less than three minutes to go. Hutson Mason pulled off a double pump fake and found wide receiver Michael Bennett on the run in the back of the end zone, cutting the Yellow Jacket lead to three. Georgia was clicking on all cylinders offensively and all momentum was in their favor as the teams headed to the fourth.

The final period was definitely a battle from beginning to end. Georgia Tech milked around seven minutes off of the clock, and eventually put a score on the board as DeAndre Smelter found the end zone. After the score, Georgia had to hurry things up a bit, as time was running low and they were facing a two score deficit. The Todd Gurley show continued as he found pay-dirt with less than seven minutes remaining, only leaving Georgia down one score.

With Georgia Tech’s tendencies to run, many knew the Yellow Jackets would continue to milk the clock, so Georgia had to come up with a big defensive stand. They did just that as safety Josh Harvey-Clemons came up with a key interception, giving the ball back to the Dawgs. Georgia took over and knotted up the scoreline as Marshall Morgan split the uprights, sending the game to overtime.

For Georgia, running back Todd Gurley carried the team on his back in the overtime periods. Georgia Tech scored first, and the Dawgs had no problem answering as Gurley bullied his way in to cap off a three play drive. Georgia got the ball again, due to consecutive possessions in overtime, and it was time to finish the comeback and send DawgNation home happy.

On the first play of the second overtime, Gurley gashed a hole for 25 yards finding pay-dirt on a spectacular run, and Georgia’s defense made sure that held up, stopping the Yellow Jackets on their final possession. Georgia won this classic matchup by a score of 41-34 (see highlight video below).

Georgia will wrap up their 2015 campaign in Atlanta yet again, with that last matchup at Bobby Dodd in their heads. Let’s all hope a lot of exciting action occurs this weekend, and the offense is awake and clicking as it was in 2013. I don’t expect anything less than a great game as both records can be thrown out the window. Be sure to tune in at noon on ESPN2 to see how the Bulldogs fare this time around.