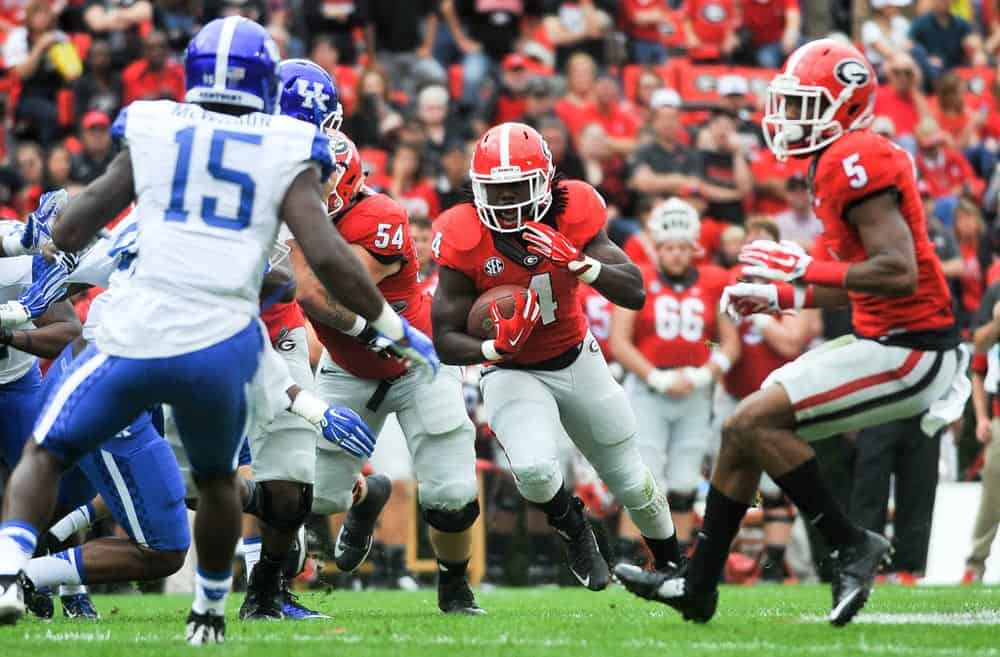 ATHENS, Ga. – An all-around team performance from the Georgia Bulldogs led to its 27-3 defeat of the Kentucky Wildcats Saturday afternoon at Sanford Stadium.

The Bulldogs (6-3, 4-3) were outstanding defensively for all 60 minutes, especially in the first-half. The Bulldogs held Kentucky (4-5, 2-5) to just 99 total yards in the half and forced two turnovers. Georgia came out with the same intensity for the remaining 30 minutes holding Kentucky to just 81 yards. Overall, the Wildcats were held to just 180 yards for the game. Defensive back Dominick Sanders recorded two interceptions on the contest.

The Bulldogs did most of their damage offensively on the ground, led by Sony Michel with 165 yards rushing and one touchdown. Terry Godwin chipped in 26 yards along with a touchdown of his own. Greyson Lambert and Brice Ramsey combined to go 10 for 19 with 90 yards and a touchdown.

“It was a good day,” Richt said. “A good solid victory. It was the last home game for the seniors and it meant a lot to them to finish with style. The underclassmen played their tails off for those guys. That was a motivating factor and they did a good job of that. Overall, the coaches and the players did a wonderful job of focusing on what’s important.”

The Bulldogs were first to strike, putting six on the board after Terry Godwin took a direct snap 28-yards for a touchdown. Georgia tacked on three more points to its lead late in the first-quarter with a 22-yard field goal from Marshall Morgan. The score was set up by a muffed punt by the Wildcats at the 25-yard line that was recovered by deep snapper Nathan Theus.

Kentucky put its first points on the board with 1:12 left on the clock in the second quarter drilling a 32-yard field goal. Georgia drove the length of the field on the ensuing drive, but was unable to convert a field goal attempt as time expired.

To begin the second-half Georgia stuffed Kentucky’s fourth down attempt near midfield handing the offense good field position for the Bulldogs first drive of the half. The Bulldogs marched their way down the field for 53-yards, capping the drive off with a one-yard Sony Michel touchdown run.

Following Dominick Sanders’ second interception on the game, the Bulldogs were able to score three points on a 28-yard field goal from Morgan.

The Bulldogs return to action next Saturday at 12 p.m. ET when they head to Auburn, Alabama to take on the Auburn Tigers. The game will be nationally televised on CBS.

*Michel Hits Century Mark: The Bulldogs finished with a season-high 300 yards rushing in their sixth win of the year, and it was the most by the Bulldogs since 305 versus UK last year. Sophomore TB Sony Michel scampered 45 yards to set up Georgia’s third touchdown and finished with a career-high 165 yards on 24 carries (6.9 avg.) and a touchdown. This marked Michel’s second 100-yard game this year and the third of his career. Michel’s 45-yard carry set up a 10-yard touchdown catch by junior TB Keith Marshall. This was Marshall’s first receiving touchdown this season and the third of his career. Seven different Bulldogs ran the football today.

*Stingy Defense: Georgia’s defense held Kentucky to three points on a total of 180 yards (79 rushing, 101 passing). The Wildcats’ only points came in the first half came on a field goal after Kentucky started its drive at the Georgia 20 after a turnover. The Wildcats ran four plays and got just five yards. UK came in today averaging 24.2 points a game. The Bulldogs’ tackle leader, senior ILB Jake Ganus, led the Bulldogs with eight stops while junior Leonard Floyd finished with five.

*Series Notes: With today’s 27-3 win, the Bulldogs have won six in a row in the series and extend their advantage to 55-12-2. Also, they held UK to a season-low three points, the fewest in the series since 1995 when Georgia won 12-3 here as the game featured all field goals.

*Wild Dog Touchdown: On the Bulldogs’ second series, freshman Terry Godwin and Michel took a combined three direct snaps on the six-play scoring drive that started at the Kentucky 45 yard line. Godwin capped off the drive with a 28-yard TD run to put Georgia up 7-0. It was his first four carries as a Bulldog and tallied 26 yards.

*Through The Air: Senior receiver Malcolm Mitchell led the Bulldogs with four catches for 52yards. He passed Saturday’s honorary captain Mohamed Massaquoi for fifth in school history now with 159 career catches. He ranks seventh in Bulldog history for career receiving yards with 2,102. Georgia quarterbacks (Greyson Lambert and Brice Ramsey) combined to go 10-for-19 for 90 yards and one TD. Ramsey also handled a majority of the punting too, with a 47.7 average (3-for-143 yards).

*Points Off Turnovers: Georgia three points off three turnovers while Kentucky also kicked one field goal after recovering two fumbles. The Bulldogs are -2 for the year. Senior SN Nathan Theus jumped on a Wildcat fumble following a Bulldog punt late in the first quarter. Senior PK Marshall Morgan connected on a 22-yard field goal to make it 10-0. Sophomore Dominick Sanders had his team-high third interception of the season (team’s seventh) and sixth of his career midway through the second quarter. However, Sanders fumbled and lost the ball at the end of his return. The Wildcats failed to capitalize on the turnover. Late in the second period, sophomore Isaiah McKenzie caught his second pass of the game before fumbling it at the Bulldog 20 yard line. Kentucky answered with a field goal of its own.

*For Starters: Georgia had started the same offensive line for the first eight games of the season. Sophomore RG Dyshon Sims started for the first time on Saturday as senior John Theus (RT), senior Kolton Houston (LG) and sophomore Isaiah Wynn (LT) started at different spots. Captain and senior DT James DeLoach also got the starting nod for the first time in his career.

*Injury Report: Junior receiver Reggie Davis sustained a concussion in the first quarter and is out for the game.

On the win …
“It was a good day, a good solid victory. It was the last home game for the seniors and it meant a lot to them to finish with style. The underclassmen played their tails off for those guys. That was a motivating factor and they did a good job of that. … Overall, the coaches and the players did a wonderful job of focusing on what’s important.”

On the lines of scrimmage …
“I was very pleased with what happened up front. It was a line-of-scrimmage game and we won in the trenches today on both sides of the ball. We had a situation where we had a comfortable lead and we were able to pound the ball and chew up the clock. … Part of it was the defense getting off the field and then the offense moving the ball. We had 71 plays and they had 47 plays and that was important.”

On Dominick Sanders …
“If you watch him in practice, he’s always picking off balls. He’s got great ball skills and instincts to know when and where the quarterback is going to throw it. He’s not afraid to go make a play. He can break on the ball and catch it when he gets there.”

On Auburn …
“Going to Auburn is tough. It’s going to be a big one for both of us.”

On the “wild dog” offense …
“We have skill guys who can handle it. Terry Godwin is a guy that can handle the zone read and Sony Michel can take the ball and run it. That adds another blocker to the scheme. The defense figures you’re going to run it, but you have numbers better at the line of scrimmage.”

On the quarterback play …
“It was just what we needed. There was no point in slinging it all over the yard today. The safest way was just how we played it. But when we did throw it, we were fairly effective.”

On Sony Michel …
“It was a great game for him. At the half, we talked about being really close to breaking a big one. When we finally broke through and got a long run, the yards start coming and you feel better about the run game. When the line of scrimmage controls the game like we did on both sides, everything looks good.”

On Brice Ramsey punting …
“He’s got a big leg and he’s taken to this. I’m proud of him. Brice got his chance and he’s taking advantage of it.”

On lining up at wide receiver when Georgia went into a wildcat formation …
“I’m not the fastest guy in the world, but I am pretty tall. Maybe that is a mismatch or something (laughter). We were able to move the ball with that and the line was able to create some pretty big holes for the backs in that formation.”

On difference in the first half and second half …
“Again, on the first drive of the game we had to deal with a penalty, which set us back. We just can’t start out so slow and that is on all of us. We came out and played better in the second half, but we have to start better than we have been.”

On the offense’s performance on Saturday …
“We haven’t been in the end zone for a while now, so it was great to get a touchdown and put some points on the board. It was exciting.”

On overcoming any off-the-field distractions this past week …
“I would say yes in a way, but we kind of blocked all that stuff out and got back to what we have been doing and who we are.”

On overcoming adversity this week …
“It hasn’t been that tough. I think on the outside it looks a lot worse than it has been on the inside. We are together. We are a family and we are a tight unit. When stuff like that happens we just get even closer. When you put our backs against the wall, we just come out fighting.”

On the defense’s performance on Saturday …
“I think we have been playing pretty well. Overall, our defense is getting better. I think we had a great game plan today and we executed and did the things we need to do to be successful.”

On getting the win today …
“It felt pretty good. We just kept our heads up and kept our eyes on the prize, which is the main thing and we were able to do today.”

On his second interception…
“I wanted it pretty bad. That’s how I felt. It is just fun anytime you get an interception. I just kept my eyes on the quarterback and was able to break on the ball and get it.”