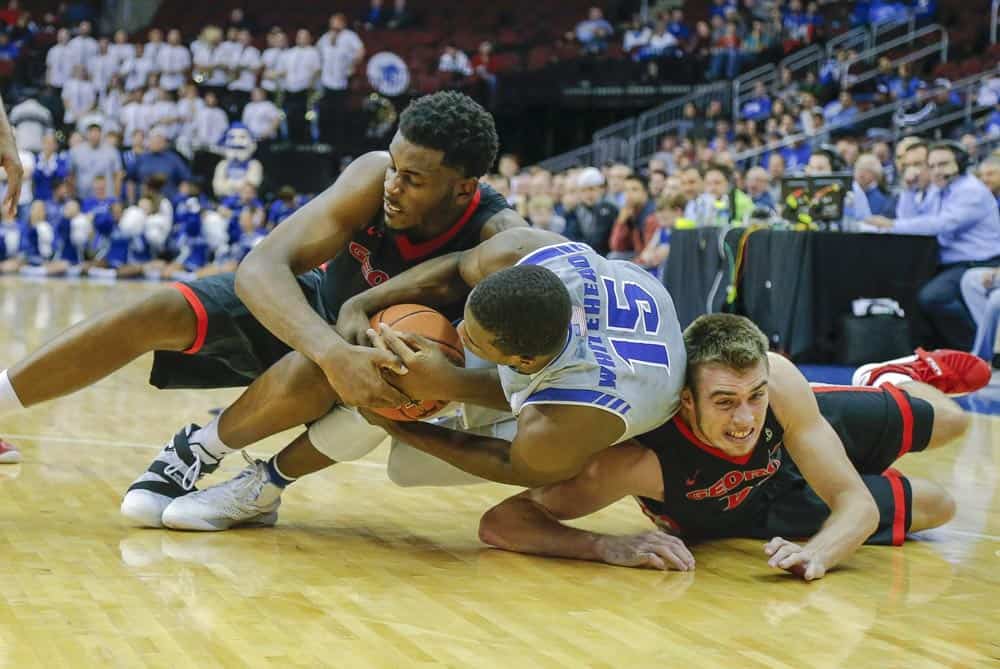 ATHENS, Ga. – The Georgia men’s basketball team (2-2) lost a hard-fought game on the road,69-62, to the Seton Hall Pirates (5-0) Saturday night at the Prudential Center. The Bulldogs were led by by forward Yante Maten, who poured in a career-high 21 points.

Georgia trailed by as much as ten points in the second half, but cut the lead to one point with just over two minutes to go. Both teams focused on getting the ball down low throughout the half and Seton Hall was able to hold its lead down the stretch despite numerous comeback attempts from UGA.

Forward Kenny Paul Geno also recorded a career-high 13 points alongside Maten. Senior guard Kenny Gaines dropped 13 points of his own to round out Georgia’s double-digit scorers.

“We got beat on the glass,” head coach Mark Fox said. “And we got beat at the free throw line. You cannot lose in those two areas and win on the road. We shot a good percentage from the field, but we just couldn’t get stops. Although we held them to 39-percent, we got out rebounded in the second half. They got to the line more than we did.”

The teams went to the break tied at 30-30. The Bulldogs were led by Yante Maten in the first 20 minutes, who had 10 points and ripped down two rebounds. Georgia shot 56-percent from the floor while holding Seton Hall to 44-percent.

Offensive rebounds plagued the Bulldogs in the second half, with the Pirates pulling down 10 in the half and 13 in the game. Senior Charles Mann was handed his fourth personal foul with over five minutes to go, leaving the Bulldogs without one of its key playmakers for most of the final few minutes in the half.

Georgia cut the lead to 60-59 with 2:23 left in the game, but Seton Hall made too many plays down the stretch for the Bulldogs to hold on. With 28 seconds left the Pirates hit a big three-pointer to put the game out of reach

The Bulldogs return to action on Tuesday hosting Oakland at 7 p.m. ET. The game will be televised on the SEC Network+.