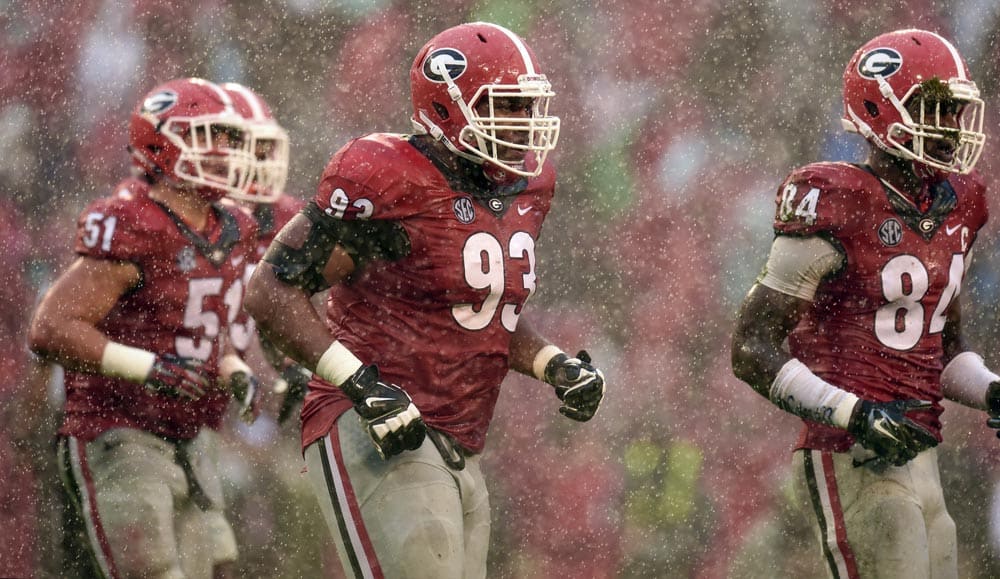 ATHENS, Ga. – Rainy weather forced the Georgia Bulldogs to improvise for their Tuesday practice in anticipation of their Saturday showdown against Florida in Jacksonville.

The team bused 41 miles to the Atlanta Falcons’ training facility in Flowery Branch, where their hosts had already completed practice for the day. The Bulldogs worked out for 2 1/2 hours in the Falcons’ indoor building, continuing their preparations for the Florida game.

Despite the relatively unfamiliar surroundings, the Bulldogs were able to put together a productive workout. ”I thought we had a great practice today,” head coach Mark Richt said. ”We’re very grateful and thankful to the Atlanta Falcons organization to allow us to be here today. It was important that we get the work done that we needed to, and practicing here made it possible.”

Playing Florida will present a great enough challenge, Richt said. Playing the Gators in the neutral-field setting of EverBank Field gives the game its unique challenge. The elevated noise level will approach that of a road game, which will necessitate the team’s use of its non-verbal cadence, he said. ”It’s a game that everything seems to be — if you let it — it can become bigger than it is, whether it’s something good or something bad,” he added. ”You’ve got to be able to keep your poise, keep your balance and just stay focused on your job.”

Saturday’s game will kick off at 3:39 p.m. CBS will televise the game nationally, with Verne Lundquist and Gary Danielson in the booth, and Allie LaForce providing commentary from the sideline.