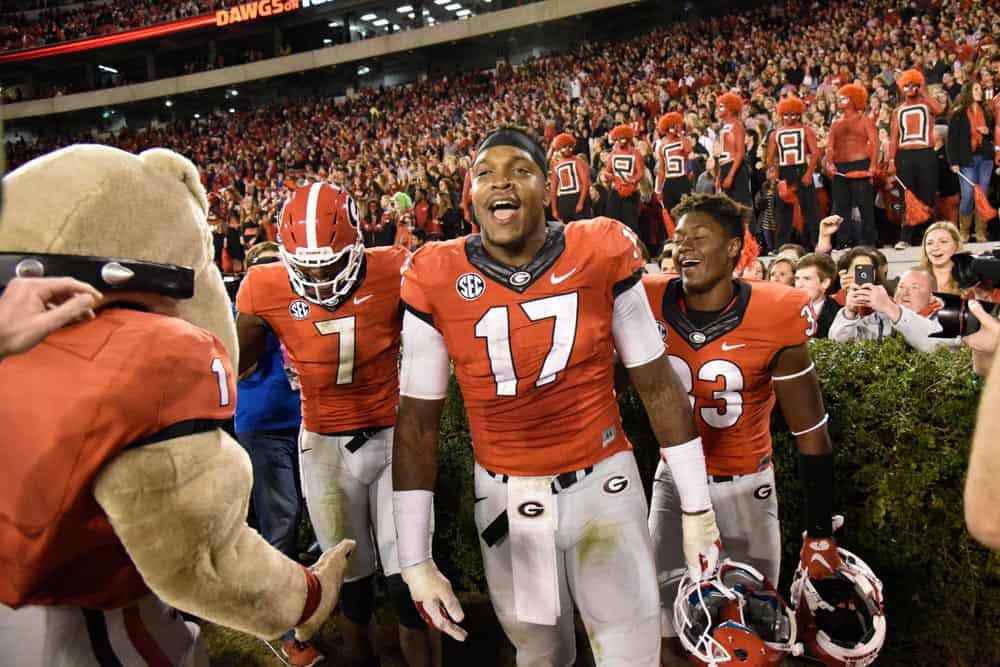 ATHENS, Ga. – The Georgia Bulldogs improved to 5-2 on the year by winning a defensive struggle, 9-6, over the Missouri Tigers.

The Bulldogs held the Tigers to just 21 yards rushing on the night and 164 total yards and did not allow a touchdown to Missouri for the second straight year.

Georgia will return to action in two weeks in Jacksonville as they will take on the Florida Gators. The Dawg’s will enjoy a off-week next Saturday.

*Bulldogs Win Without a TD: For the first time since 1995 against Kentucky, Georgia won without scoring a touchdown, posting a 9-6 victory tonight. In 1995, the Bulldogs registered a 12-3 win over UK in Athens.

*Series History and Homecoming: With the 9-6 win, Georgia takes a 4-1 lead in the series with Missouri. Also, the Bulldogs extend their winning streak on Homecoming to nine and overall are 75-17-2 on this day. The Tigers were the 10th different SEC team that the Bulldogs have faced on Homecoming.

*Morgan Accounts For All Nine Points: Senior PK Marshall Morgan connected on a 29-yard field to tie the score at 3-all. He then knotted the score at 6-all at the end of the third quarter. He missed a 26-yarder with 5:40 left in the game. Then, he made a 34-yarder for a 9-6 edge with 1:44 left. It was Morgan’s second career game-winner to go with a 42-yarder to beat Tennessee in overtime in 2013 in Knoxville. He is 9-for-13 this year on field goals and 55-for-71 in his career. Morgan is tied for fourth on the SEC all-time list with 371 career points (Tennessee’s Jeff Hall).

*Total Defense: The Bulldog defense held the Tigers to a pair of field goals as they ran just 48 plays and tallied 164 yards plays, gaining just 37 yards in the second half. The Tigers had -1 yards rushing in the first half and 21 for the game. The Tigers made three trips to the Red Zone and came away with two field goals. Missouri’s defense was equally strong as the Tigers came into the game leading the league in Scoring Defense at 13.5. Georgia ran 77 plays and gained 298 yards. They were averaging 37 points a game but nine was enough tonight. Senior Jake Ganus led the Bulldogs with nine tackles, one sack and 1.5 TFL.

Mitchell Comes Up Big All Over the Field: Senior Malcolm Mitchell was the leading receiver with seven catches for 49 yards. He now has 151 career receptions (6th in school history) and 1,990 career yards (9th in school history). Mitchell also caused a fumble on the punt coverage teams, and it was recovered by UGA and led to a field goal. Mitchell made a key tackle on a Tiger interception on the first series of the game.

*Career High For Godwin: Georgia freshman receiver Terry Godwin posted career highs with six catches for 78 yards (four for 64 in the opening half). Godwin also returned the first punts of his career and finished with 49 yards on three returns.

*Third Downs: Coming in, Georgia’s third down conversion rate was 29 percent. Tonight, the Bulldogs finished 9-for-19 (47 percent). Missouri came in at 36 percent and they ended the game 2-for-13 (15 percent).

*Points Off Turnovers: The Bulldogs collected a turnover and gave up one on Saturday night. Lambert threw an interception on a tipped ball on the game’s first play that Missouri returned 39 yards to the Bulldog 1. The Tigers went for -1 yard on three plays and settled for a field goal. In the third quarter, senior Malcolm Mitchell drilled Missouri’s punt returner, forcing a fumble, and sophomore Malkom Parrish recovered it. Morgan kicked his second field goal on the following drive. For the year, the Bulldogs are +1 in turnover margin. Georgia has scored 34 points off 10 turnovers while opponents have scored 17 points off nine Bulldog miscues.

*For Starters: Freshman DT DaQuan Hawkins, freshman OLB Chuks Amaechi and senior SE Kenneth Towns all started for the first time. Georgia has had 14 first-time starters this year, including six freshmen. Senior OLB Jordan Jenkins did not start due to a hip flexor strain. This breaks his team-best streak of 32 consecutive starts. He has started 38 in his career. Senior OT John Theus owns the longest streak now with 27 straight (42 overall).

On the win …
“I’ll take that everyday, just so long as there’s a victory at the end of it. I’m thankful and happy right now. It’s not going to be pretty all the time, but the victory is pretty. The bottom line is everyone kept battling, kept fighting, kept believing. I’m just really proud of the job everybody did. Sometimes the toughest ones are the best ones.”

On what he said to PK Marshall Morgan before the last kick …
“I told him I love him no matter what. There’s so much pressure on these kids. I told him, ‘I believe in you, so relax and focus on your job and your fundamentals and let it rip.’”

On the defenses …
“It felt like if either team got a touchdown, it might be too much to overcome. Both defenses played spectacularly. One of the biggest plays was Malcolm Mitchell hustling to make a tackle after the interception. That allowed our defense to do its thing and force them to kick. That’s why you never quit. The defense bowed their necks and did a beautiful job of forcing the kick. Our defense played lights out.
Keeping them out of the end zone was huge.”

On WR Terry Godwin …
“He’s growing up. He’s playing a lot of ball for us. He’s made some mistakes along the way, but he stepped up big today. He had some big returns and catches and he secured the ball. That was huge.”

On the open date …
“We’ll probably practice three days next week and allow our guys some time to heal up. We’ll enjoy this victory for a bit and start focusing on the Florida game. We’ve got a lot of guys playing through pain and now thankfully we’ve got a little time to heal up and get some rest.”

On the win against Missouri…
“A win is a win. I am so proud of this team and especially proud of our defense.”

On Georgia’s offense…
“I felt like we were able to move the ball here and there. We had some drives that did not end the way we wanted them to. We just were not able to keep them alive. We had a first down here, a first down there, but we just couldn’t finish.”

On the defense and their ability to stop Missouri…
“We leaned on them a lot today and I could not be prouder or happier for our defense.”

On whether he has ever been a part of a game like Saturday’s game vs. Missouri…
“I don’t think I have ever been in a game when there was no touchdown scored. We are happy to get out of here with a win because they are a very good team.”

On his performance tonight …
“Prepare every week like you are the starter because you never know when you are going to be the guy, so you better be ready and be ready to go.”

On the defense’s performance on Saturday vs. Missouri…
“It shows you that when we play our style of defense, when we go out there and play our game and we have fun we can be a really good defense.”

On the last defensive series of the game…
“It was fun. I knew we were going to get a stop. I am so confident in our defense and the way we were playing. The crowd got into, which was nice, so it was fun.”

On the pass rush of Leonard Floyd…
“It’s nice when you have a guy like him that can come off the edge and wreak havoc. He is such a versatile player and can do it all.”