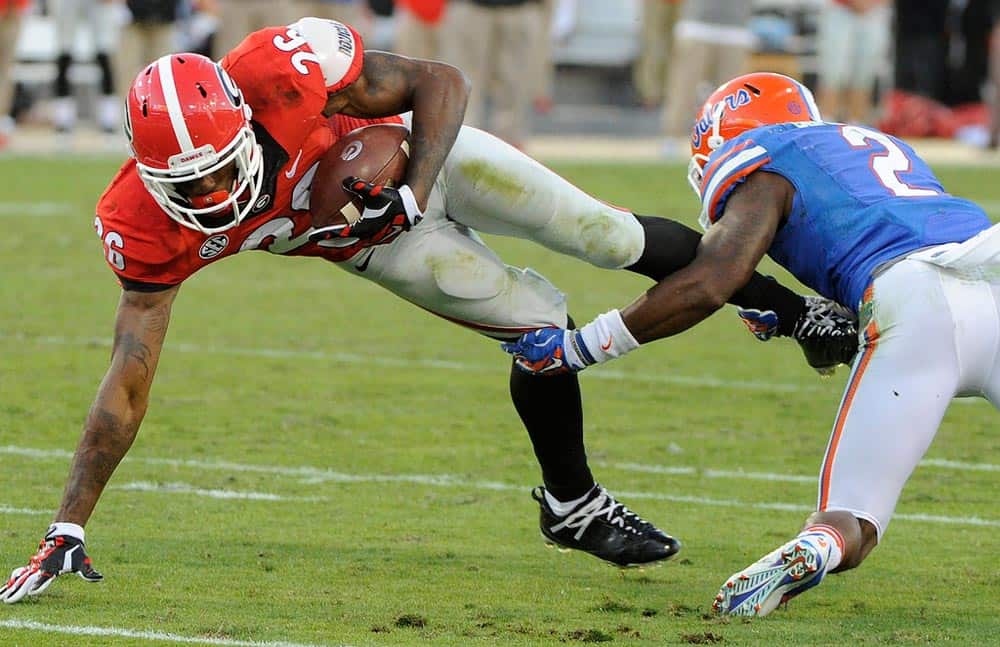 The time has come where the men in red and black go to battle against their biggest conference rival. In recent years, this series has been filled with many thrillers and bad blood between both teams. Last season, however, was an outlier as Georgia was simply overmatched. Florida was trending downward and was given virtually no chance to win. The Gators used the lack of national attention as fuel, dominating Georgia 38-20.

This season, Georgia hopes to turn the tide, as storylines are similar in reversed roles. Georgia (5-2, 3-2) enters the game as an unranked AP team without a signature win and has apparent struggles across the board. Florida (6-1, 4-1) has built an impressive résumé to this point, dominating an SEC West power, Ole Miss, a few weeks back. As a result of these contrasting résumés, Florida comes in with the hype with some regarding them as a College Football Playoff contender.

An interesting storyline in this game is that both teams control their own destiny for a berth in the SEC Championship Game. Georgia and Florida have not reached Atlanta in a significant while, 2009 for Florida and 2012 for Georgia. Both teams have the chance to get back to the highly acclaimed conference game this season, but this game is vital for both teams in order to get there. This should be a driving force for both teams to perform to the best of their abilities, as they know what is ahead of them.

Each team is presented with challenges, both offensively and defensively. I’ve broken down both the pass game and run game, as well as those defensive opponents that pose challenges for the offensive attacks.

Georgia’s passing game, in order to be efficient, has to be run crisply by quarterback Greyson Lambert. He must be able to make proper reads and spread the ball across the field. We have seen inconsistencies in his abilities to properly manage the game.

There is an advantage and a disadvantage for Georgia in the passing game. The good news is Florida’s pass rush serves as one of their few team weaknesses, so I would look for Lambert to have ample time to work in the pocket. However, Georgia has to deal with one of the nation’s best defensive backs, Vernon Hargreaves. It is assumed that he will be locked down on WR Malcolm Mitchell. Therefore, Georgia should continue to further implement Terry Godwin and Isaiah McKenzie into the passing offense.

Lambert will have a short leash against the Gators, as Georgia doesn’t have much room for error. Quite surprisingly, I would look for QB Faton Bauta to finally get his opportunity. It’s time for him to get his chance. We have seen Brice Ramsey simply underperform when given his opportunity to make a difference in the game. Bauta provides a different skill set than the other two; the mobility factor and the superb work ethic are two of the most important skills that would lead to Georgia’s success.

Florida’s pass game is lead by Treon Harris, after former starting QB Will Grier was suspended for performance enhancing drugs (PEDs) a couple weeks back. I would look for Jeremy Pruitt to send the blitz on a consistent basis and look for LB Leonard Floyd to put pressure on Harris. It serves as an advantage for Florida as it seems as if their potent wide receivers are a mismatch for Georgia’s inexperienced secondary.

As we have seen from Georgia throughout the season, the middle of the field seems to be consistently open. Georgia must contain that area, or the secondary may begin to be picked apart. Harris presents some inaccuracy but will have some opportunities open.

Georgia’s run game is simply injury riddled. But as we know, Georgia has its depth for a reason. Sony Michel and Keith Marshall should get the majority of the reps, with Brendan Douglas receiving a considerable workload. Along with potential fatigue between the three, Georgia also faces the challenge of Florida’s stout run defense. Their front seven is led by projected #1 run stopper in this year’s NFL draft, Jonathan Bullard. As a result of this tough matchup, I look for it to take a while for Georgia to get the run game going but eventually should figure it out as the talent will serve to be too much.

Florida’s run game simply torched Georgia’s run defense last season, rushing for over 400 yards, and Pruitt’s crew simply had no answer. We all hope some of these issues have been resolved, while Kelvin Taylor looks to put on a repeat performance. A big key for Georgia’s run defense is the effectiveness of Jordan Jenkins, returning from injury. In order for Georgia to have much of a chance, Jenkins and others on the defensive line must make proper reads and contain runs both through the tackles and to the outside.

This game is simply the tipping point of the season. With a win, Georgia’s goal of reaching Atlanta is very well in reach, after seeming to be a difficult task when losing back-to-back contests at the beginning of October.

However, with a loss, Mark Richt’s “seat” is assumed to get much warmer, and many of those in “DawgNation” will not be happy with the state of the program. While many seem to not give Georgia any chance, I think the matchups tend to be fairly even. Mark Richt and his team seem to have the right mindset coming in, and I look for Georgia to do what is necessary to get the game to the fourth quarter. As they say, get it to the fourth quarter, and it’s anyone’s ballgame.