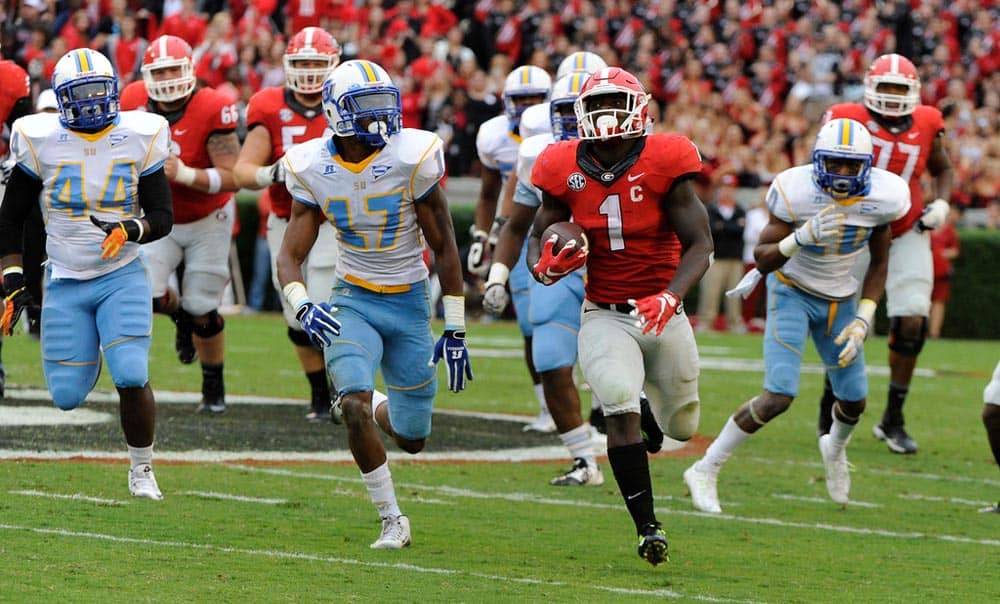 The Bulldogs (4-0, 2-0) used a steady round game to overmatch the Jaguars (2-2, 2-0). Sophomore running back Nick Chubb finished the game with 131 yards rushing and two touchdowns on 15 carries. That marks the 12th-straight game that Chubb has rushed for over 100-yards, tying Herschel Walker for the most consecutive 100-yards games rushing by a Georgia Bulldog. Sony Michel added 75 of his own yards, including two touchdown runs.

Head coach Mark Richt was happy with his team’s performance and thinks the team has plenty to build off of after the game.

“We’ll find out what we did wrong,” Richt said. ” We’ll correct it and get better at what we do. We have so much to get better on and it’s a task we take very seriously. Our goal is to get better on a daily basis. It sounds boring, but that’s football. Football is a game of repetition. If you continuously rep it well at practice, hopefully you’ll execute it well in a game.”

Both teams started the game stalling on their first drives, but it was the Bulldogs to score first. Nick Chubb took a screen pass from Lambert 25-yards to the endzone following a host of blockers. The drive was set up by a blocked punt from Malkom Parrish.

The Bulldogs forced another three and out from the Jaguars on their next drive and quickly scored another touchdown. After several big catches from senior receiver Malcolm Mitchel, Sony Michel drug a handful of Southern defenders into the endzone to punch in the second score of the game from eight yards out.

After heading to the locker rooms at halftime up 20-6, the Bulldogs came out pounding the ball in the second-half. Georgia rode its star running back Chubb all the way down the field, punching the ball in from nine yards.

Great defense by the Bulldogs on Southern’s next possession led to good position on the field for the offense and it wasn’t wasted. Greyson Lambert hit Malcolm Mitchell from 23-yards out for his second passing touchdown of the day.

*Chubb Hits Century Mark Again: After rushing for 31 yards in the first half, sophomore TB Nick Chubb finished with 131 yards on 15 carries (8.7 avg.) and two touchdowns, including a 49-yarder that put him over the century mark. Chubb also had one 24-yard catch for a touchdown. He has rushed for more than 100 yards in 12 games in a row, which is one shy of Herschel Walker’s mark of 13 that bridged the 1980-81 seasons and included the Sugar Bowl to cap a perfect season. Toledo’s Kareem Hunt has also rushed for 100 or more yards in 12 straight and plays at 7 p.m. tonight.

*Offense Doesn’t Miss A Beat: Georgia came in today averaging 44.7 points per game and cruised to a 48-6 win over Southern in the first-ever meeting with the Jaguars. Georgia tallied 532 yards of total offense on the day and pulled away with a 28-point outburst in the third quarter. Georgia had 261 yards rushing and 271 through the air. Sanford Stadium fans also were treated to a halftime performance by the Jaguars band, also known as the “Human Jukebox,” and they played in the stands following the game too.

*Richt Gets 140th Win: With the latest victory, the Bulldogs are 58-11 against teams from outside the SEC under March Richt including 41-2 at home. Also of note, Richt collected his 140th career victory, which ties him for ninth all-time in the SEC with Georgia’s Wallace Butts. Bulldog legend Vince Dooley is third all-time with 201 wins.

*Marshall Connects Early: Senior PK Marshall Morgan drilled a season-long 47-yard field goal to put the Bulldogs up 3-0 for the second consecutive week in the opening period. He then connected on a 25-yard field goal at the end of the second quarter. Marshall is now 4-for-6 on the year and 10-for-17 from 40-49 yards in his career. Morgan stands sixth in the school history with 50 field goals made. Georgia’s last field goal attempt of the day was by senior Patrick Beless.

*Blocked Punt: Sophomore CB Malkom Parrish blocked his first career punt for the Bulldogs in the first quarter, which gave Georgia the ball at the Southern 27. Two plays later, Nick Chubb caught a 24-yard touchdown catch (third of his career) from Greyson Lambert. This is Georgia’s first blocked punt since freshman D’Andre Walker had his first career punt block versus Louisiana at Monroe in this year’s opener. Walker’s block resulted in a safety.

*Leading Tacklers: Sophomore Quincy Mauger, junior Tim Kimbrough and freshman Trent Thompson led the Bulldogs with five tackles each. This tied Kimbrough’s career high and was a career high for Thompson. Georgia limited Southern to one touchdown and 184 yards of total offense. Georgia blanked Southern in the second half, holding them to 34 yards.

*Another Freshman Debut: Freshman DE Michael Barnett played for the first time in his career giving the Bulldogs 22 true freshmen who have played, which leads the nation.

On getting in so many subs…
“Everybody works hard and wants the opportunity to play. When you get a chance to play a lot of guys, it’s good for morale and it’s good for experience. I’m glad we got the game in position to do that. It’ll be fun watching the tape.”

On the second-half rushing game…
“I challenged our line at halftime. Our backs were slamming into trash. There was no space. We weren’t controlling the line like we’re used to. Once we got space for the backs, good things happened. The whole key was when the line took over.”

On receiver Malcolm Mitchell…
“We’re seeing a healthy Malcolm Mitchell. He had a great offseason, spring, summer, fall practice and now games. The guy has worked hard on being a better technician. He’s polished his game. He took it seriously and has done a good job.”

On getting ready for Alabama…
“We’ll find out what we did wrong, correct it and get better at what we do. We have so much to get better on and it’s a task we take very seriously. Our goal is to get better on a daily basis. It sounds boring, but that’s football. Football is a game of repetition. If you continuously rep it well at practice, hopefully you’ll execute it well in a game.”

On tying the number of wins Coach Wallace Butts had…
“Coach Butts was a great coach and his legacy lives on with ‘Wally’s Boys,’ a great group of Bulldogs that played for Coach Butts, loved him and appreciated all that he did.”

On Southern’s second quarter…
“They had a really good drive. They moved the ball well and they had a fourth-down conversion on their scoring drive. They’re a good football team. They average 270 passing and 170 rushing. They’re a very balanced group. They did their thing. I was impressed with them.”

On the upcoming Alabama game…
“Right now, it is the next game on our schedule. We are going to celebrate this win and get ready for next week’s game.”

On if the second half of the Vanderbilt game helped put him in a groove…
“It definitely mattered, not just for me but for the entire offense. To go out there and be able to sustain drives not just on the ground. For us to be able to do that as an offense has really worked out.”

On his offensive line helping him to his 12th-straight 100-yard game…
“Coming into the half, they were like ‘how many do you need Nick?’ and I was like ‘ya’ll care more about it than I do.’ When somebody said I only needed 25-yards they started saying ‘let’s get it, let’s get it,’ and I said ok, let’s go.”

On if he is gaining confidence…
“I go out at practice and do that every day, so maybe it is just me being comfortable with my ability as a player.”

On his TD catch that was called back…
“I caught it, turned around, saw that flag and I was hoping it was on them. I was hoping I got another opportunity and I did.”

On if he has thought about the Alabama game…
“Honestly, I have just been focusing on the game at hand and everything else will work itself out.”

On so many young players getting to play…
“It’s always good to see the young guys get in and play really well. It goes to show you they are out there working hard Monday through Friday, and it’s good to see it pay off on Saturday.”